Makai Ocean Engineering celebrates the completion of the world's largest operational Ocean Thermal Energy Conversion (OTEC) at the Natural Energy Laboratory of Hawaii Authority (NELHA).
Makai's OTEC power plant uses the temperature difference between the ocean's cold deep water and warm surface water to generate clean, renewable electricity that is available 24 hours a day, 365 days a year. The NELHA-sited plant will generate 100 kilowatts of sustainable, continuous electricity—enough to power 120 Hawaii homes annually.
The breakthrough marks the first true closed-cycle OTEC plant to be connected to a U.S. electrical grid, and represents a major achievement for Hawaii, the United States, and marine renewable energy.
Distinguished officials gathered at NELHA to commemorate the occasion by "flipping the switch" to deliver OTEC power for the first time.
"Today marks the launch of the world's largest operational ocean thermal power plant," said Hawaii Governor David Ige. "This plant provides a much-needed test bed to commercialize ocean thermal energy conversion technology and bolster innovation, and it serves as a stepping stone to larger plants that will provide meaningful amounts of stable, clean power to Hawaii and other locations in Asia Pacific such as Okinawa in the near future."
The research and development at the plant was funded by the Office of Naval Research (ONR) through the Hawaii Natural Energy Institute (HNEI), and the infrastructure was funded by Naval Facilities Engineering Command (NAVFAC). Accrued electricity revenues from this power plant will sustain further research and development of OTEC technology. A potential next phase for OTEC development at NELHA is being considered by an international consortium under the recently signed Okinawa-Hawaii clean energy agreement.
"In the pursuit of 100 percent renewable energy, Hawaii must consider all our energy options, including ocean thermal energy," said Senator Mazie Hirono. "Ocean thermal energy conversion, or OTEC, could provide a stable supply of power from an abundant and clean source: the ocean's heat. I am proud to announce that Hawaii is now home to the world's largest operational OTEC plant that recently began feeding ocean-based power into the electrical grid at the Natural Energy Laboratory of Hawaii Authority in Kona. I applaud the work being done by the Office of Naval Research, Hawaii Natural Energy Institute, and Makai Ocean Engineering to develop this innovative technology for Hawaii's energy future."
"Lockheed Martin and Makai have worked closely on OTEC projects for nearly 40 years, and this power plant in Hawaii is a significant milestone in our progress. These facilities are an asset to OTEC development and provide key performance testing for Lockheed Martin's large-scale heat exchangers," said Steve Klotz, engineering director at Lockheed Martin Energy. "As we develop larger scale OTEC plants, this facility will continue to serve as a valuable resource for validating and advancing our technology - and we look forward to our continued collaboration with Makai." 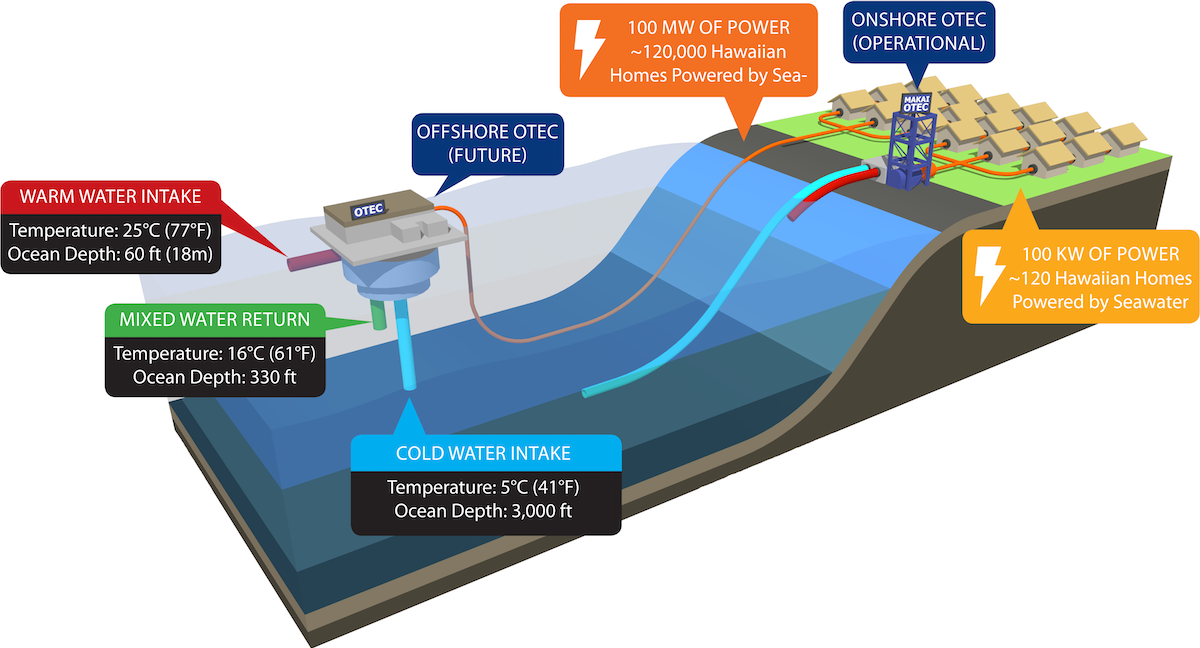