Founded in 2012, Joint Centre for Energy Storage Research is one of the Department of Energy's (DOE's) Energy Innovation Hubs. The mission of these Hubs is to advance promising areas of energy science and engineering from the earliest stages of research to the point of commercialization.
The mission of JCESR, DOE's Batteries and Energy Storage Hub, is to overcome critical scientific and technical barriers and create transformative battery technology for transportation and the electric grid. JCESR was launched nearly four years ago. Their vision was bold: high-performance, low-cost electricity storage that would lead to widespread deployment of electric vehicles and transformation of the electricity grid with renewable generation and distributed energy resources.
With that vision in mind, JCESR set as their five-year mission the attainment of three legacies:
With only a little more than a year left JCESR are well on their way to attaining their first legacy, a library of fundamental knowledge for beyond-lithium-ion batteries including a database of simulated materials properties open to all interested researchers. In all, more than 24,000 Electrolyte Genome/Materials Project calculations have been released to the public, along with apps to enable their use. Since its release, this open source database has been accessed by the community more than 18,500 times.
The five techno-economic models created by JCESR for designing virtual batteries on the computer are another important contribution. These models are being used to evaluate the best pathways for beyond-lithium-ion systems to reach 400 watt hours per kilogram (400 Wh/kg) and $100 per kilowatt hour ($100/kWh), key targets for batteries used in electric vehicles and on the grid.
Prototype Batteries
In pursuit of the important second legacy, JCESR took a major step forward in January 2016 when it selected designs for proof-of-principle prototypes for the grid and transportation. These designs are built on the fundamental understanding of the materials and phenomena of energy storage developed in the first legacy.
Grid: The grid prototype is an organic "redox flow" battery, which consists of two energy-dense liquids that store and release charge as they flow through the battery and undergo reduction and oxidation ("redox") reactions. 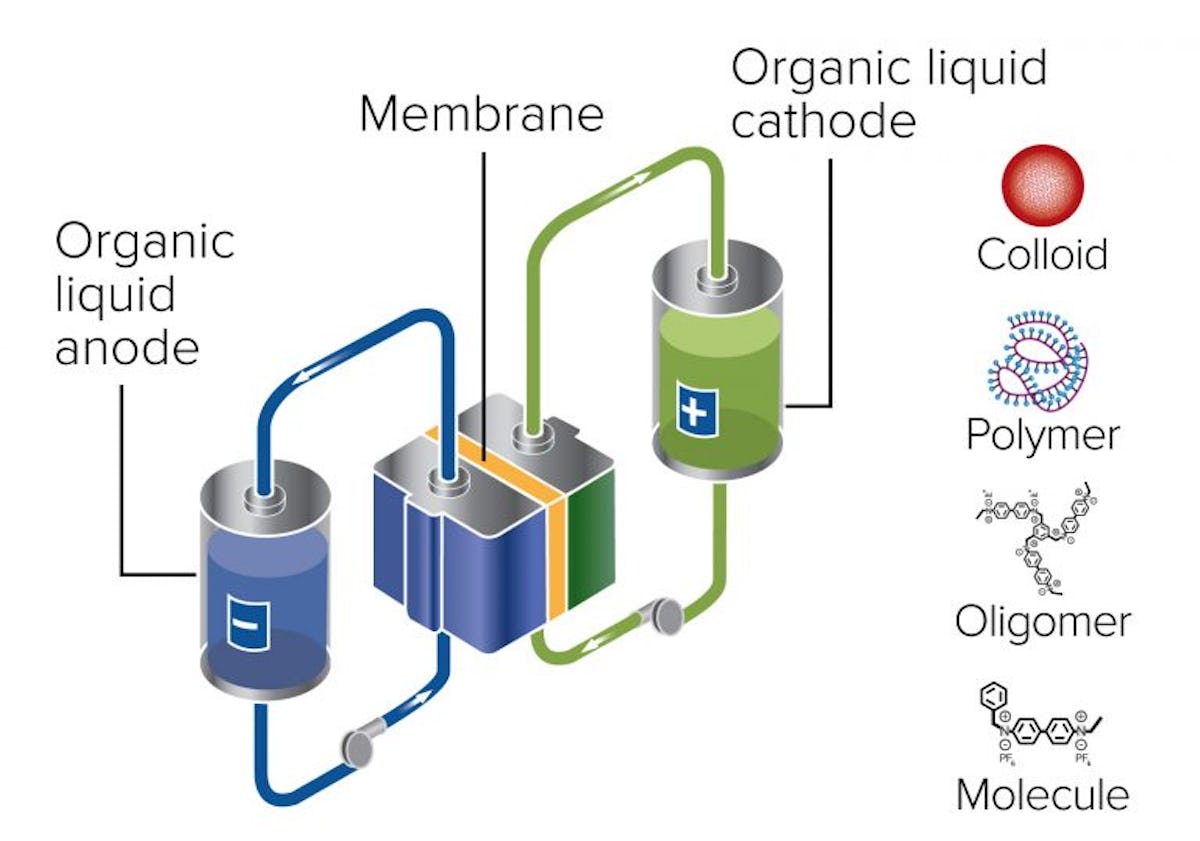 JCESR is pursuing two innovations in flow batteries. The first innovation involves the use of inexpensive, recyclable and versatile organic molecules as energy storing active ingredients, and linking these organic molecules together in oligomers of up to 10 molecules, polymers of up to 1000 molecules and colloidal particles of a million to a billion molecules. These linked "macromolecules" are large enough to be blocked by JCESR's second innovation, a special porous polymer membrane, providing a simple solution to prevent crossover of the active materials between the anode and cathode liquids.
Transportation: The selected transportation prototype contains a lithium metal anode protected from degradation by a graphene oxide membrane, a polymer-composite sulfur cathode, and an electrolyte that is sparingly soluble for the polysulfides that form during charge and discharge. 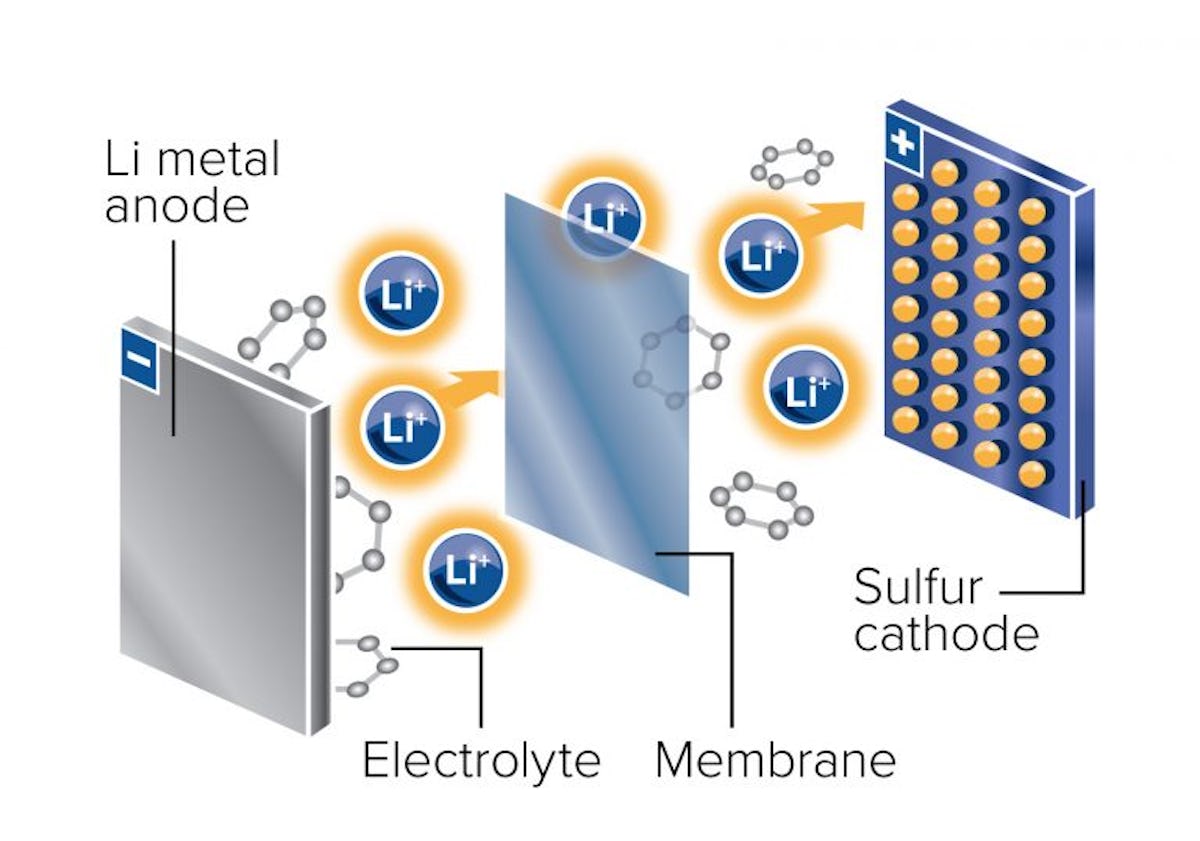 This battery system is attractive because of its high theoretical energy density and the low cost of sulfur. Key to success will be achieving a very low ratio of electrolyte to sulfur content. Full cell testing of each of these concepts is now underway, and proof-of-principle prototypes will soon be evaluated.
JCESR maintains continued development of other promising prototype options, but believes that the target of $100/kWh at the pack level will be achieved with these two systems by the end of JCESR's five-year charter.
New R&D Paradigm
JCESR have already achieved their third legacy. Their new paradigm for battery R&D integrates talent from 20 organizations comprising more than 180 researchers - including students, postdocs, early career researchers, senior scientists, and engineers from five national laboratories, ten universities, and five private sector partners. Key features of the new paradigm are frequent in-person interactions that build strong personal relationships, and continuous evaluation of strategies for achieving science and prototype legacies.
Primary Research Directions
Grid and Transportation Prototypes: For the remaining year, JCESR's research will be directed primarily at improving the prototypes for the redox flow battery for the grid and lithium-sulfur battery for transportation.
With regard to flow batteries for the grid, JCESR scientists are developing their new concept of redox-active organic macromolecules comprising oligomers, polymers, and colloidal particles. These macromolecules introduce versatile new design parameters for exceeding existing limits on energy density, lifetime, and efficiency. These redox-active molecules (RAM), redox-active oligomers (RAO), redox-active polymers (RAP), and redox-active colloids (RAC) are especially impactful when used with another JCESR innovation, polymer membranes with adjustable pore sizes. The combination of macromolecular organic active materials and adjustable porous polymer membranes enables multiple pathways to higher performance and lower cost. 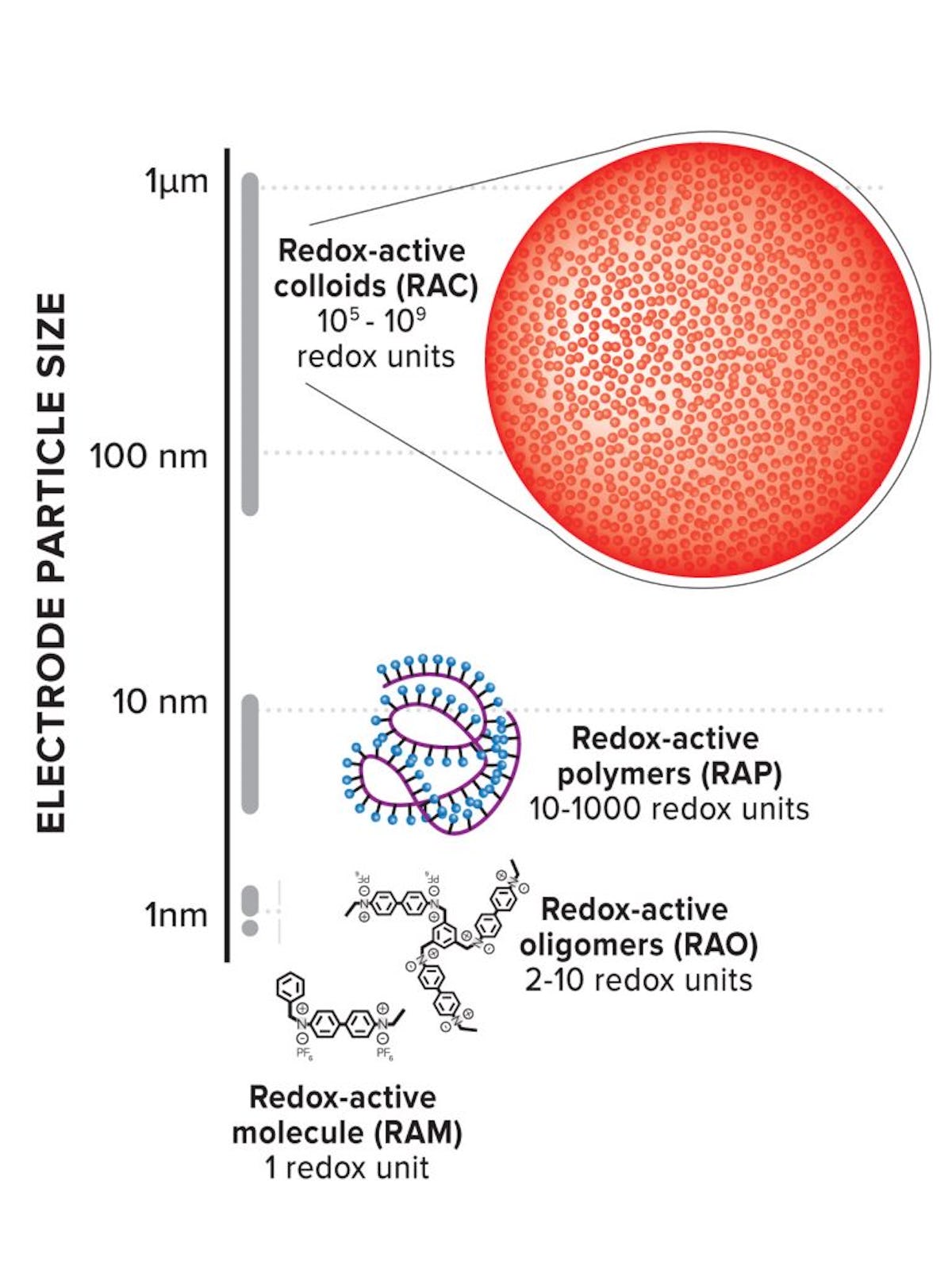 For the lithium-sulfur battery, JCESR are concentrating efforts on three design features. One is electrolytes that limit undesirable reactions of the polysulfides that form during charge and discharge. Another is binders in the sulfur cathode that trap polysulfides before they dissolve in the electrolyte and ensure mechanical integrity of the cathode during cycling. The third is special membranes that prevent movement of polysulfides from the cathode to the anode and maintain a smooth anode surface during cycling.
The team believes that the final embodiment of the lithium-sulfur prototype will require a combination of these features to meet the JCESR cost and performance targets.
Air-Breathing Aqueous Sulfur Flow Batteries: JCESR researchers have developed a new approach for a flow battery for the grid that combines an aqueous sulfur anode and oxygen cathode. This concept takes advantage of the low cost of sulfur and water and eliminates the need for a lithium metal anode and its associated challenges. The extremely low cost of this concept holds promise for novel grid applications such as seasonal storage.
Oxygen was chosen as a catholyte system based on its past use in fuel cells, which convert chemical into electrical energy by reaction of oxygen and hydrogen. This battery concept represents a revolutionary approach to long duration energy storage for the grid.
Multivalent Batteries: In multivalent batteries, scientists replace the singly charged lithium ions with ions having two or three positive charges ("multivalent") to increase the battery energy storage capacity by a factor of two or three. Cathodes for multivalent batteries are a major challenge. Only a few operate at sufficient voltage, capacity, and working ion mobility to meet JCESR's performance targets.
JCESR developed a materials genome approach to survey 1500 combinations of working ions with cathodes and identify the most promising candidates. Magnesium and calcium paired with oxides of chromium and manganese were found to have the highest voltage and capacity.
These genomic studies revealed the most promising cathodes and previously unrecognized general trends in battery research. Efforts continue in the area of magnesium anodes and electrolytes, complementing our focus on the cathode area. 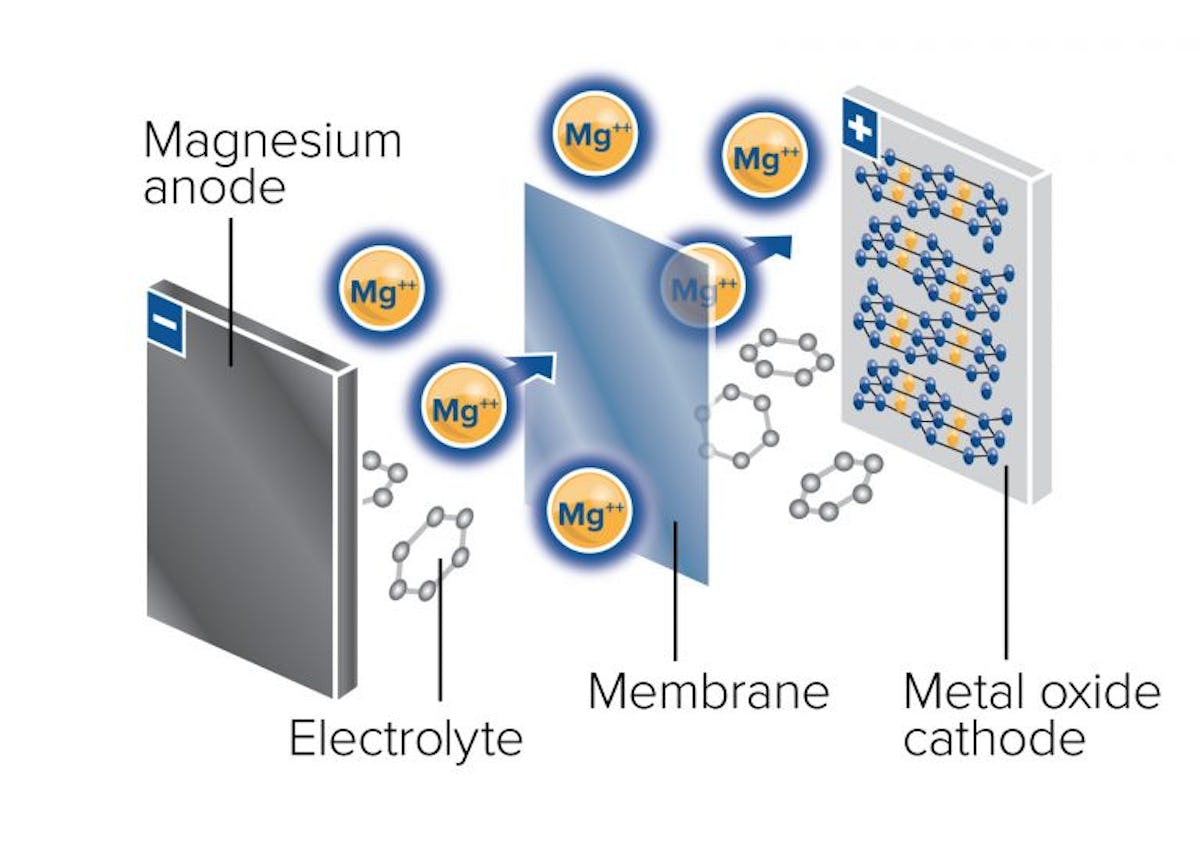 Next Steps
In its first four years, JCESR cast a wide net of possible next-generation battery technologies, then narrowed its focus to the most promising opportunities. They are now exploiting these opportunities to develop and refine proof-of-principle prototypes for the remainder of the five-year charter.
For more see Lithium-ion Batteries 2016-2026, Advanced and Post Lithium-ion Batteries 2016-2026: Technologies, Markets, Forecasts, Solid-State and Polymer Batteries 2017-2027: Technology, Markets, Forecasts, Batteries for Residential, Commercial, Industrial and Utility Applications 2016-2026,
Source and top image: Joint Centre for Energy Storage Research