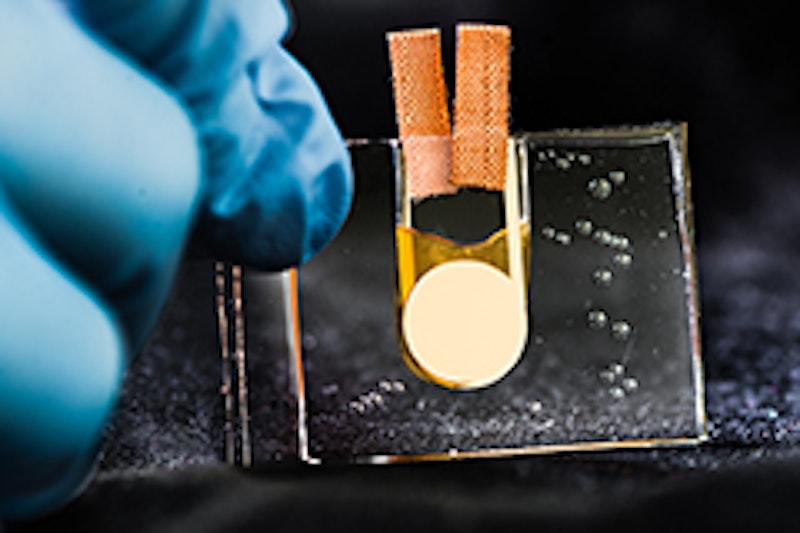 Dan Zhao and Simone Fabiano at the Laboratory of Organic Electronics, Linköping University, have created a thermoelectric organic transistor. A temperature rise of a single degree is sufficient to cause a detectable current modulation in the transistor.
The results have now been published in Nature Communications.
"We are the first in the world to present a logic circuit, in this case a transistor, that is controlled by a heat signal instead of an electrical signal," states Professor Xavier Crispin of the Laboratory of Organic Electronics, Linköping University.
The heat-driven transistor opens the possibility of many new applications such as detecting small temperature differences, and using functional medical dressings in which the healing process can be monitored.
It is also possible to produce circuits controlled by the heat present in infrared light, for use in heat cameras and other applications. The high sensitivity to heat, 100 times greater than traditional thermoelectric materials, means that a single connector from the heat-sensitive electrolyte, which acts as sensor, to the transistor circuit is sufficient. One sensor can be combined with one transistor to create a "smart pixel".
A matrix of smart pixels can then be used, for example, instead of the sensors that are currently used to detect infrared radiation in heat cameras. With more developments, the new technology can potentially enable a new heat camera in your mobile phone at a low cost, since the materials required are neither expensive, rare nor hazardous.
The heat-driven transistor builds on research that led to a supercapacitor being produced a year ago, charged by the sun's rays. In the capacitor, heat is converted to electricity, which can then be stored in the capacitor until it is needed.
The researchers at the Laboratory of Organic Electronics had searched among conducting polymers and produced a liquid electrolyte with a 100 times greater ability to convert a temperature gradient to electric voltage than the electrolytes previously used. The liquid electrolyte consists of ions and conducting polymer molecules. The positively charged ions are small and move rapidly, while the negatively charged polymer molecules are large and heavy. When one side is heated, the small ions move rapidly towards the cold side and a voltage difference arises.
"When we had shown that the capacitor worked, we started to look for other applications of the new electrolyte," says Xavier Crispin.
Dan Zhao, principal research engineer, and Simone Fabiano, senior lecturer, have shown, after many hours in the laboratory, that it is fully possible to build electronic circuits that are controlled by a heat signal.
Since 2014 the research has been financed by the Knut and Alice Wallenberg Foundation as part of the "Tail of the sun" project.
Source and top image: Linköping University
Learn more at the next leading event on the topic: Energy Storage Innovations USA 2020

Power Dressing
BioSolar Focused on Breakthrough Battery Technologies for EVs
Find out how next week in Santa Clara at the IDTechEx Show!
November 20-21, 2019, Santa Clara