Artificial islands could leverage the new Airborne Wind Energy Systems as they hit the market starting this year. See the new IDTechEx report Airborne Wind Energy (AWE) 2017-2027. Energinet.dk (Denmark) and TenneT TSO GmbH (Germany) will sign an agreement in Brussels on 23 March 2017 that will press ahead on developing a large renewable European electricity system in the North Sea. TenneT unveiled its vision of the North Sea Wind Power Hub in June 2016 . The close cooperation with Energinet.dk is an important next step towards accomplishing this vision and the 2050 climate goals formulated in the Paris Agreement (COP21).
Discussions with other potential partners are ongoing, which not only include other North Sea transmission system operators (TSOs ), but also other (infrastructure) companies. The goal is to achieve a multi-party consortium which will realize the North Sea Wind Power Hub project.
By developing the North Sea Wind Power Hub, TenneT and Energinet.dk want to make the energy transition both feasible and affordable. Central to the plan is the construction of one or more islands, so called Power Link Islands with interconnections to surrounding countries, in the middle of the North Sea (Dogger Bank):
Mel Kroon, CEO of TenneT, said: "This project can significantly contribute to a completely renewable supply of electricity in Northwest Europe. TenneT and Energinet.dk both have extensive experience in the fields of onshore grids, the connection of offshore wind energy and cross-border connections. TSOs are best placed to play a leading role in the long-term development of the offshore infrastructure. I am happy that we are going to take this step with our Danish colleagues and I look forward to the participation of other transmission system operators and possibly other partners."
Peder Østermark Andreasen, CEO of Energinet.dk said: "Offshore wind has in recent years proved to be increasingly competitive and it is important to us to constantly focus on further reduction in prices of grid connections and interconnections. We need innovative and large-scale projects so that offshore wind can play an even bigger part in our future energy supply."
North Sea Wind Power Hub: vision
Solar energy and wind energy will be necessary on a large scale because achievement of the European targets for reducing CO2 emissions hinges largely on electricity produced sustainably. Wind and solar energy complement each other: there is more sun from spring to autumn, and more wind in the colder and darker months of the year. So a sustainable and stable energy system for the future will need solar and wind energy, both on a large scale. This requires optimum cooperation and synergy because it cannot be accomplished by individual member states on their own. The European political declaration of 6 June 2016 on energy cooperation between the North Sea countries was an important step in this direction. 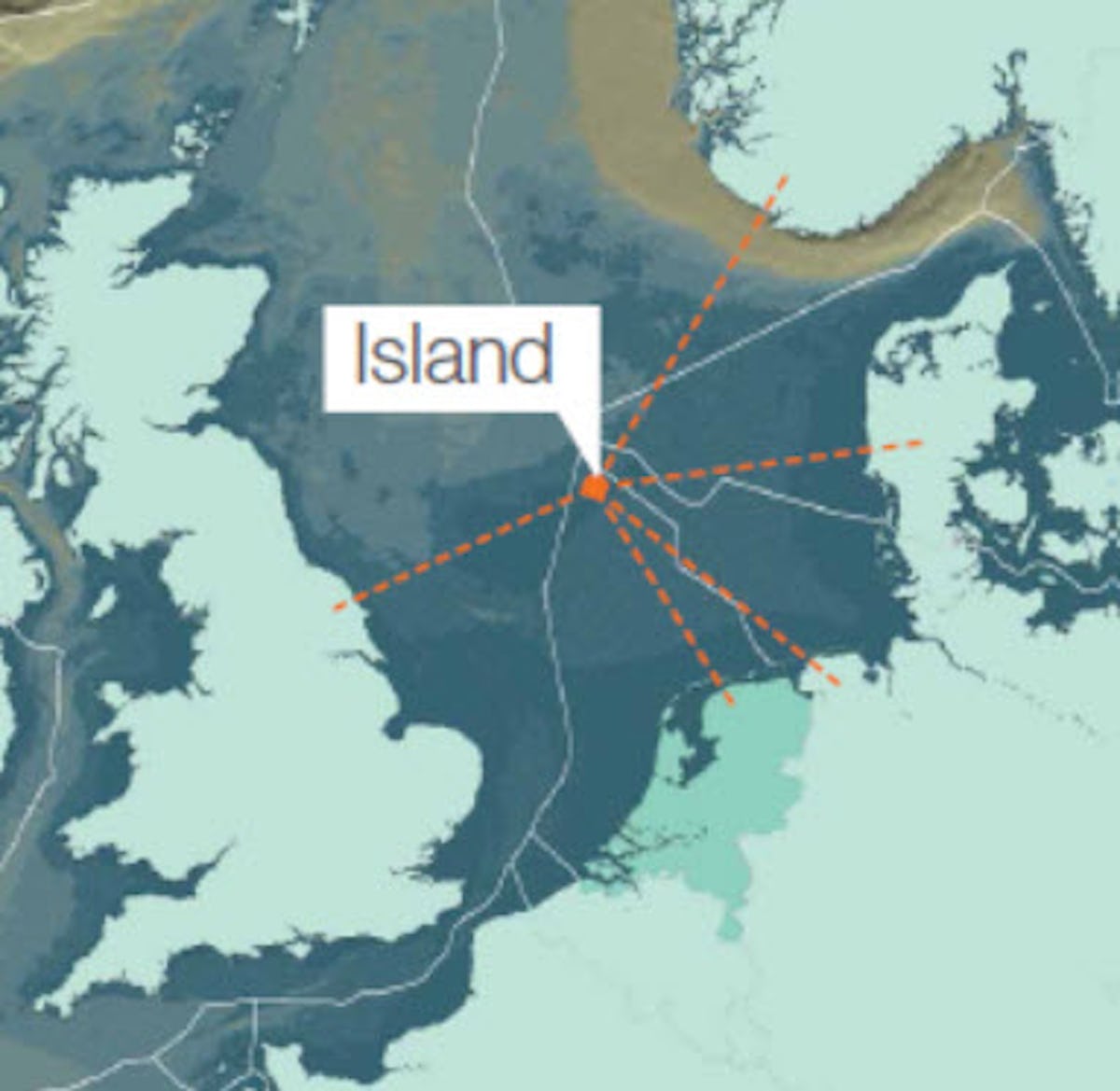 The vision of the three TSOs provides a basis, or point of departure, for a joint European approach up to 2050 and focuses specifically on developing the North Sea as a source of and a distribution centre for Europe's energy transition. The location of the Power Link (the island) should satisfy a number of requirements: optimal wind conditions, centrally located and in relatively shallow water. As a location for the island, the Dogger Bank meets all the conditions.
In short, Power Link islands in the middle of the North Sea offers everything necessary to make offshore wind energy a success:
On 23 March, during the North Seas Energy Forum in Brussels, the consortium between TenneT Netherlands, Energinet.dk and TenneT Germany will be made official by Mel Kroon (TenneT) and Torben Glar Nielsen (CTO Energinet.dk), in the presence of Maroš Šefčovič, European Commissioner for Energy Union.
Source and images: Energinet.dk