Way to harvest energy from the backs of marine species

The sun is the most abundant energy resource known to exist, constantly striking the earth with 173,000 terawatts of solar power—more than 10,000 times the world's total power use. But with water covering nearly three-fourths of the Earth's surface, only 29 percent of that solar energy has the potential to be harvested.
While solar panel systems continue to pop up on rooftops throughout the world, fighting for some of the 43,000 terawatts, Michael Shafer, assistant professor of mechanical engineering at Northern Arizona University, and several of his students spent the last seven months developing solar panels capable of harvesting the other 71 percent of the sun's energy—solar panels installed underwater, in the ocean, on the backs of marine species.
In 2015, Shafer along with electric engineer Paul Flikkima were awarded a $634,000 grant from the National Science Foundation to develop energy-harvesting technologies. They originally looked at pressure cycles and whether or not the movement of the animals underwater could generate enough energy to harvest. But after extensive research, it was concluded that solar not only provided the most reliable and cost-effective route, but also had the potential to harvest a significant amount of energy.
"The main goal of the grant was to look at how much ambient energy was available under the ocean and on the backs of various marine species to supplement the budget for tags that scientists are using to track and study these animals," Shafer said. "Electronic tags are put on everything from fish and whales to seals and turtles to figure out where they are going and how they are diving. Some even have sensors to monitor heart rate and the activity levels of the animal, while others measure optical properties of the water."
According to Shafer, these devices play a vital role in not only collecting data on various species, but also studying the marine environment.
The problem with battery-powered tags is because they are submerged in the salty ocean hundreds of meters below the surface, in order to withstand 7,000 pounds of pressure and prevent water from seeping in, the electronic systems are encapsulated in epoxy—making the devices inoperable after the battery dies.
With each tag costing between $2,000-5,000, in order to get a decent sample size to conduct research, scientists would need to spend tens of thousands, if not hundreds of thousands of dollars in hardware.
"The energy demands of these tags coupled with battery technology restrictions fundamentally limit what kinds of science questions can be asked and answered," Shafer explains. "By incorporating underwater solar energy harvesting technology, not only does that provide a way to power the device—allowing scientists to take measurements more frequently, transmit data more often and take additional measurements—but it allows scientists to deploy the same tag over and over again, saving thousands of dollars and ultimately providing more, better data than the limited battery-powered alternative."
The device
Junior Taylor Bruce didn't think his decision to attend NAU would lead to the opportunity to be involved in a project such as this. "I assumed that opportunities like this were only for graduate level students. I never expected to be a part of something so exciting."
Over the course of half a year, Bruce, along with classmates Lauren Adoram-Kershner and Colt Morris worked closely with Shafer and Flikkema to develop the solar panel monitoring device and accompanying model.
"First, we designed and prototyped the base solar measurement system using transistors, resistors and an Arduino," Bruce explained. "Next, we integrated that system into a self-sufficient embedded system with a battery, voltage regulator and microcontroller. I then refined the printed circuit board design while Colt developed the program code. Finally, we spent the remaining time testing and debugging our system."
Once the solar board was built, the device was shipped to Wildlife Computers Inc. where it was encapsulated with a position, depth and temperature datalogger in epoxy. There was no going back now.
Though the company was able to test the device and ensure it was able to withstand depths of up to 500 feet, there was not much time for long term testing due to wildlife availability.
"We decided to accelerate our testing timeline and conduct a preliminary deployment in the second year of the grant rather than waiting for the third year," Shafer said. "This would teach us a lot about technical and logistical issues that arise when deploying a tag in the ocean. We would have liked more time for in-lab testing, but we knew that a preliminary deployment would help ensure success in next year's tests." 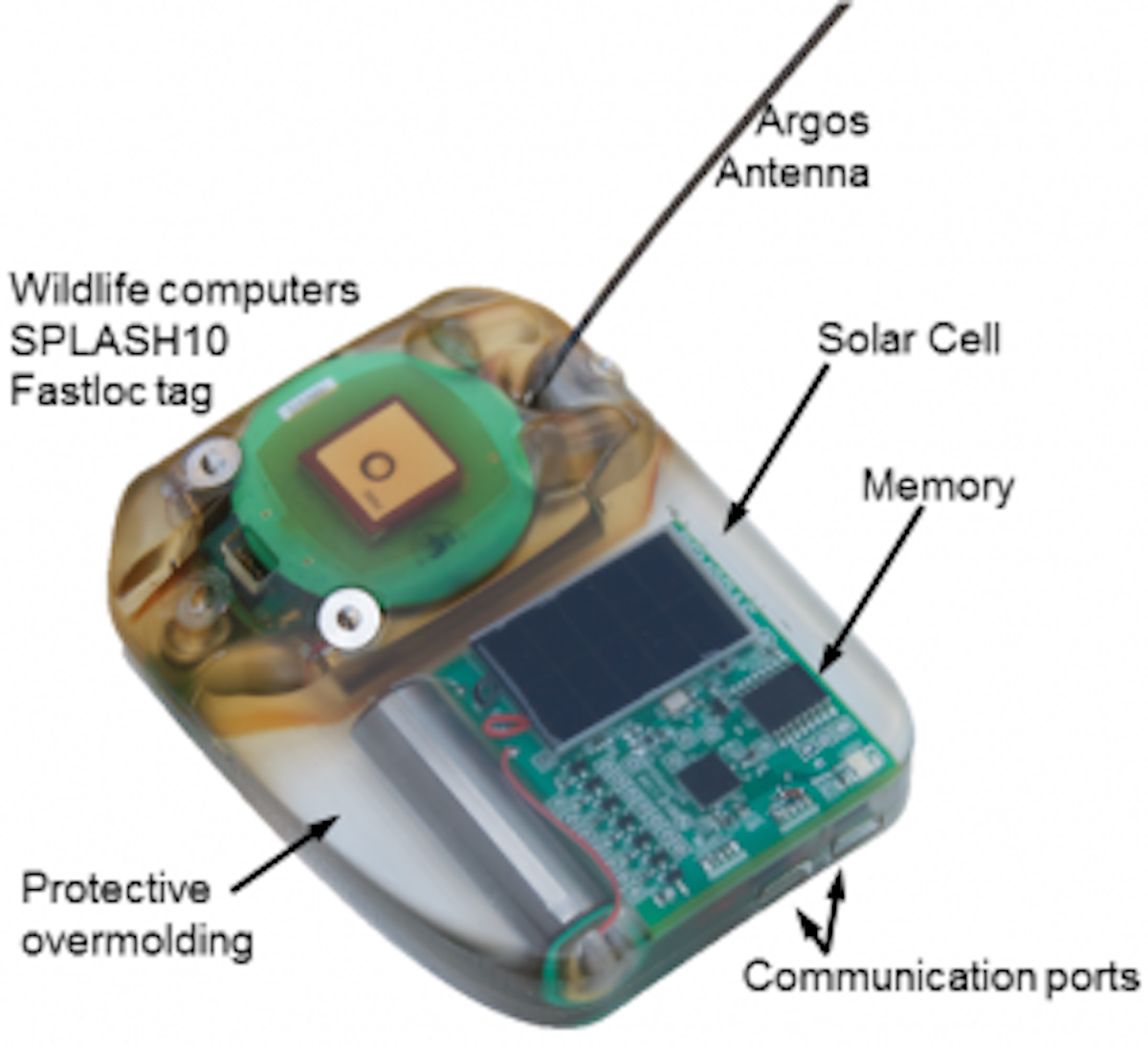 The tag deployment
In April, Shafer and his students, device in hand, travelled the 722 miles to UC Santa Cruz where they met with Professor Dan Costa and his graduate student Rachel Holser. Costa has been studying various pinniped species since the mid-1970s. He and his students now regularly work with northern elephant seals.
"What's great about elephant seals is they are a conservative test case for solar power because they spend so much time in really deep water and at high latitudes. If we find this device can harvest energy on an elephant seal, there will most certainly be a whole lot of other animals it will work on as well," Shafer said.
The morning of April 11 the team headed to Año Nuevo, where they found a juvenile female elephant seal—the perfect size for a test subject. The GPS tracking device along with the solar board were temporarily adhered to her head.
The seal was released into Monterey Bay and Shafer and his team immediately started collecting data ashore.
"The datalogger lets us know where the animal is in terms of position and depth. We can feed that information into our solar power model and compare the predicted results to the data we collected directly from the solar cell mounted on the animal, " Shafer explains. "The goal all along is to develop and validate this sub-surface solar model so that we can make power harvesting predictions for other animals without needing to do these kinds of tests."
Though this particular tag was not being powered by the solar panel, it allowed the researchers to validate and improve their model while learning how to develop technology that could withstand the harsh conditions in the marine environment.
"Looking at the data collected, we see high voltages when the animal is up at the surface, and the solar intake drops down to almost nothing when it dives deep. We can also see it decrease as the sun goes down, and for about 6 hours, the device is turned off per our programming at night to save energy and not waste the battery. About an hour before the sun comes up, the device turns back on and we can capture the entire sunrise."
After a three day, 50-mile journey, the seal beached. The device was collected, the seal was thanked (in the name of science) and the team started the trek back to land-locked Arizona.
The results
The data the researchers were able to collect during and after the test was assuring and will provide a basis for comparison to their model of the power available at depth.
"Once we're confident in the model, we can throw the tracks of different species at the model to make the case for solar and say where it's appropriate and where it's not. We can then start to use the model to develop engineering guidelines for expected power for different species."
The information would then allow scientists to build engineering systems to maximize the amount of energy available.
"They wouldn't need to be as conservative with their energy expenditures—how many measurements they're taking, how often they're communicating with satellites—because they would know how much energy they will actually be able to harvest, and can recharge the battery accordingly."
A paper that breaks down the details of the test results was recently published by Shafer and his team, and will be presented later this month.
"This technology is so important because it will allow us to better understand the world that we live in," Bruce said. "As we develop better technology for tracking and monitoring animal behavior, we will learn more about how our planet is changing and more importantly, what we can do to adapt to it."
The team plans to launch a followup deployment with updated hardware next month.
Source and top image: North Arizona University