Researchers at the University of Miami and at the Universities of Tokyo and Tohoku, Japan, have been able to prove the existence of a "spin battery," a battery that is "charged" by applying a large magnetic field to nano-magnets in a device called a magnetic tunnel junction (MTJ). The new technology is a step towards the creation of computer hard drives with no moving parts, which would be much faster, less expensive and use less energy than current ones. In the future, the new battery could be developed to power cars.
The device created by University of Miami Physicist Stewart E. Barnes, of the College of Arts and Sciences and his collaborators can store energy in magnets rather than through chemical reactions. Like a winding up toy car, the spin battery is "wound up" by applying a large magnetic field - no chemistry involved. The device is potentially better than anything found so far, said Barnes.
Spin battery graphic representation 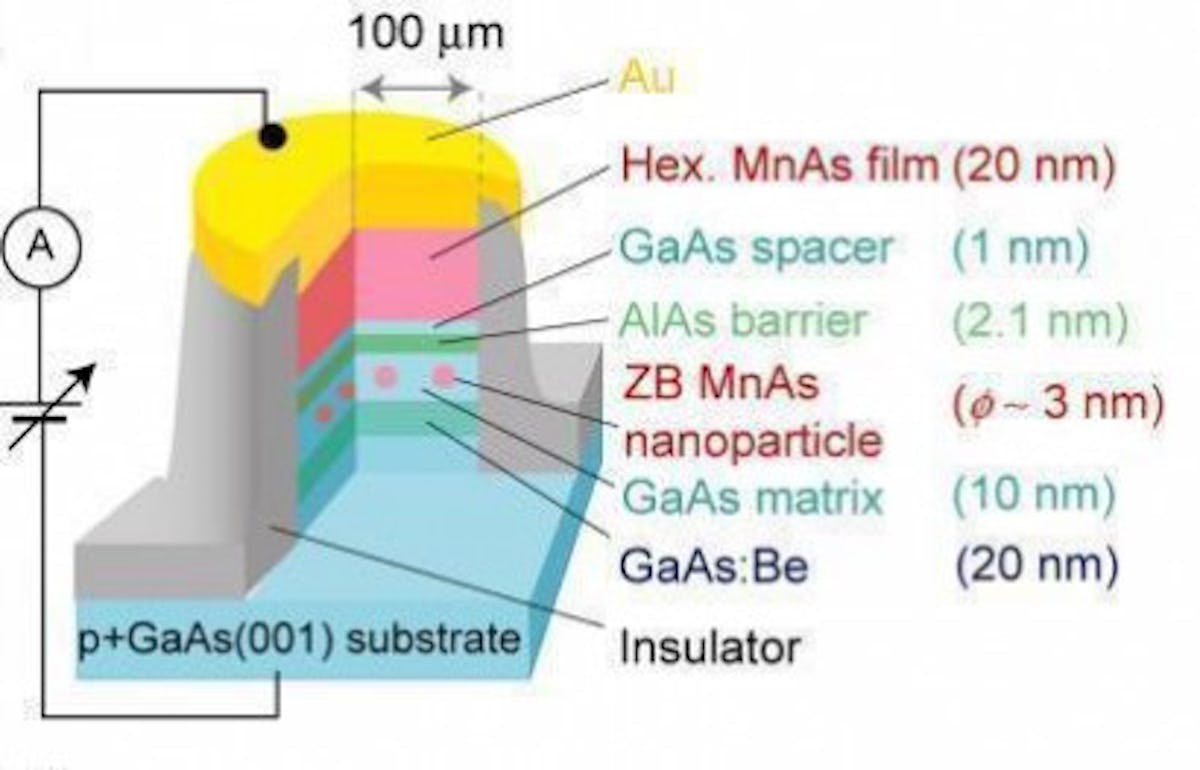 Source: Pham Nam Hai
"We had anticipated the effect, but the device produced a voltage over a hundred times too big and for tens of minutes, rather than for milliseconds as we had expected," Barnes said. "That this was counterintuitive is what lead to our theoretical understanding of what was really going on."
The secret behind this technology is the use of nano-magnets to induce an electromotive force. It uses the same principles as those in a conventional battery, except in a more direct fashion. The energy stored in a battery, be it in an iPod or an electric car, is in the form of chemical energy. When something is turned "on" there is a chemical reaction which occurs and produces an electric current. The new technology converts the magnetic energy directly into electrical energy, without a chemical reaction. The electrical current made in this process is called a spin polarized current and finds use in a new technology called "spintronics."
The new discovery advances our understanding of the way magnets work and its immediate application is to use the MTJs as electronic elements which work in different ways to conventional transistors. Although the actual device has a diameter about that of a human hair and cannot even light up an LED (light-emitting diode - a light source used as electronic component), the energy that might be stored in this way could potentially run a car for miles. The possibilities are endless, Barnes said.
"There are magnets hidden away in many things, for example there are several in a mobile telephone, many in a car, and they are what keeps your refrigerator closed," he said. "There are so many that even a small change in the way we understand of how they work, and which might lead to only a very small improvement in future machines, has a significant financial and energetic impact."
Source: University of Miami
Top Image: University of Miami. Source: MICEFA
For more attend: Energy Harvesting and Storage Europe 2009
Also read: Energy Harvesting and Storage for Electronic Devices 2009-2019