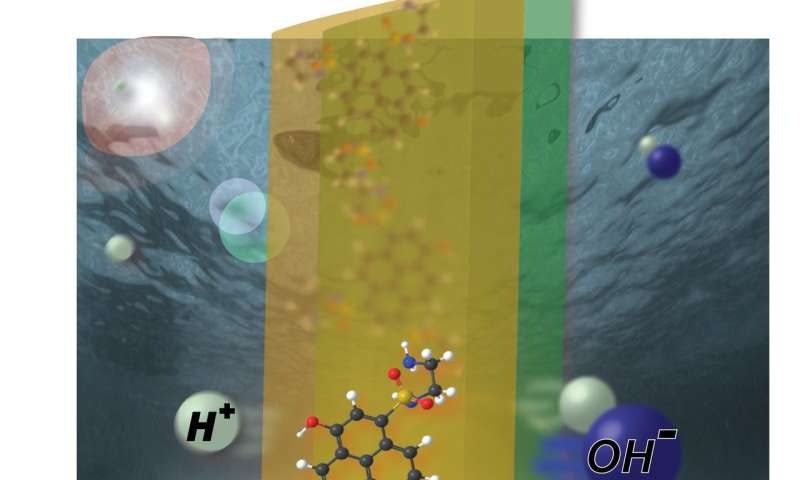 Modern solar cells, which use energy from light to generate electrons and holes that are then transported out of semiconducting materials and into external circuits for human use, have existed in one form or another for over 60 years. Little attention has been paid, however, to the promise of using light to drive another electricity-generating process -- the transport of oppositely charged protons and hydroxides obtained by dissociating water molecules. Researchers in America report such a design, which has promising application in producing electricity to turn brackish water drinkable.
The researchers, led by senior author Shane Ardo, an Assistant Professor of Chemistry, Chemical Engineering, and Materials Science at the University of California, Irvine, write that they have crafted an "ionic analog to the electronic pn-junction solar cell," harnessing light to exploit the semiconductor-like behavior of water and generate ionic electricity. They hope to use such a mechanism to manufacture a device that would directly desalinate saltwater upon exposure to sunlight.
"There had been other experiments dating back to the 1980s that photoexcited materials so as to pass an ionic current through them, and theoretical studies said that those currents should be able to reach the same levels as their electronic analogs, but none of them worked all that well," says first author William White, a graduate student in Ardo's research group.
In this case, the researchers attained more success by allowing water to permeate through two ion-exchange membranes, one that mostly transported positively charged ions (cations) like protons and one that mostly transported negatively charged ions (anions) like hydroxides, functioning as a pair of chemical gates to attain charge separation. Shining a laser on the system prompted light-sensitive organic dye molecules bound to the membrane to liberate protons, which then transported to the more acidic side of the membrane and produced a measurable ionic current and voltages of over 100 mV in some instances (60 mV on average).
Despite crossing the 100 mV photovoltage threshold at times, the level of electric current that the double-membrane system can achieve remains its chief limitation. The photovoltage would need to be magnified by more than another factor of two to reach the ~200 mV mark necessary to desalinate seawater, a target that the researchers are optimistic about hitting.
"It all comes down to the fundamental physics of how long the charge-carriers persist before recombining to form water," Ardo says. "Knowing the properties of water, we are able to more intelligently design one of these bipolar-membrane interfaces so that we can maximize the voltage and the current."
In the long run, desalination is just one possible application of the synthetic light-driven proton pump developed by the researchers. It could also have potential for interfacing with electronic devices, or even for powering signaling in brain-machine interfaces and other "cyborg cells" that combine living tissue and artificial circuity, a role that cannot be filled by traditional solar cells, which are unstable in biological systems.
"We have had a lot of ideas about what this technology could be used for; it's just a question of learning enough to cross between fields and make the device work for those intended applications," says Ardo. "I think this is just another example of what you can do when you have scientists who are trained across many disciplines and think outside the box."
Source: Cell Press
Top image: William White