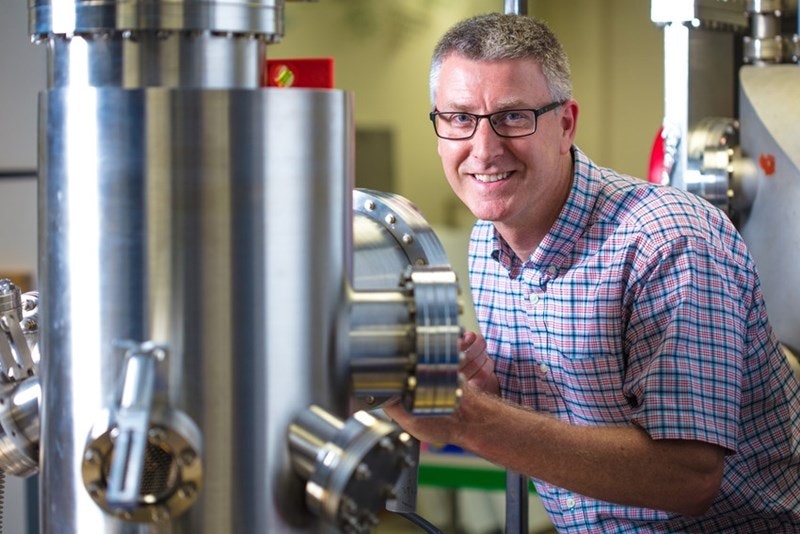 The research of Paul Thibado, professor of physics at the University of Arkansas, has shown that the motion of two-dimensional materials may be used as a source of clean, limitless energy. NTS Innovations (also known as Nanotube Solutions LLC), a nanotechnology company headquartered in East Peoria, Illinois, has licensed this patent-pending technology from the university and plans to use it to fabricate devices and systems that produce energy without consuming fuel or creating pollution.
Thibado and his colleague, assistant professor Pradeep Kumar, discovered the potential of two-dimensional materials while observing the motion of graphene, a two-dimensional form of carbon, mounted on a copper grid. Using a high-powered microscope, they observed that the freestanding graphene has a rippled structure, with each ripple flipping up and down in response to the ambient temperature.
Thibado used this concept to design a device he calls a Vibration Energy Harvester. The harvester is a negatively charged sheet of graphene suspended between two metal electrodes. When the graphene flips up, it induces a positive charge in the top electrode, and when it flips down, it positively charges the bottom one, creating an alternating current.
The samples of graphene in Thibado's lab measure about 10 microns across, so tiny that more than 20,000 of them could fit on the head of a pin. Each ripple in the graphene measures only 10 nanometers by 10 nanometers, yet may yield as much as 10 picowatts of power. As a result, each of these micro-sized membranes has the potential to produce enough energy to power a wristwatch. Because they get their energy from ambient heat, they never need charging.
Charles Woodson, director of research and technology at NTS Innovations, immediately recognized the potential in Thibado's discovery. "This is by far the most exciting project I've seen," said Woodson, who has worked in the energy and nanotechnology fields for more than five decades.
NTS Innovations focuses on the commercialization of nanotechnology and environmentally sustainable heating, water filtration and purification, as well as the production of green energy, all via 2-D materials. Woodson envisions many applications for Thibado's discovery. For example, it could be used to create sustainable, decentralized energy systems throughout the world, especially in places where the energy grid system is underdeveloped or nonexistent. It may also prove beneficial in biomedical devices, enhanced solar and wind production, capturing waste heat and remote sensing devices.
With the support of NTS Innovations, Thibado plans to produce a proof of concept — a device capable of charging a capacitor using only ambient heat and the motion of graphene — within a year.
Source and top image: University of Arkansas