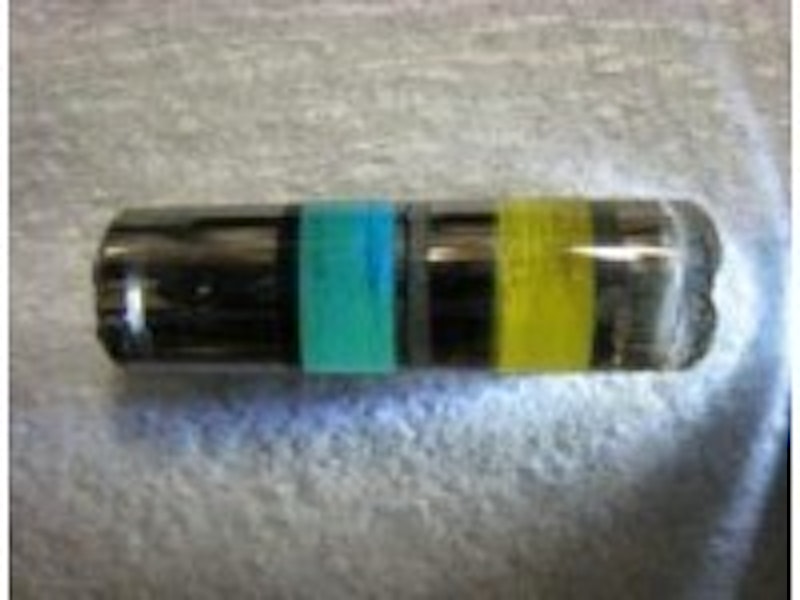 Standard dye sensitized solar cells utilize a transparent conducting electrode (TCO) which has high transmittances to visible light.
Researchers in Japan have developed a fiber type TCO-less dye sensitized solar cell after searching for ways to make a solar cell without a TCO with the aim of utilizing near infrared energy which has not been used for existing dye sensitized cells. The research group is led by Shuji Hayase, professor at the Graduate School of Life Science and Systems Engineering of the Kyushu Institute of Technology (KIT).
The prototype solar cell comprises a glass rod with a length of 35mm and diameter of 9mm. Dye sensitized solar cell layers are then formed concentrically around the glass tube in the following order:
• Layer of titanium oxide and a sensitizing pigment
• Porous titanium layer that serves as the anode
• A porous layer containing an iodine solution and other electrolytes
• A layer of platinum and titanium that serves as the cathode
The solar cell is then covered in titanium except for the 2 ends of the glass rod.
Light introduced into one end of the glass rod can be absorbed by the pigment in the solar cell and converted to electricity as long as it is not totally reflected by the inner surface. Current conversion efficiency is slightly greater than 1% when using one type of pigment. This low conversion efficiency is due to the large fiber diameter used and also because only about 15mm of the fiber served as the solar cell. It is felt that the net conversion efficiency of the solar cell could reach about 10% and the wasted light problem could be reduced by increasing the fiber length or by reducing the diameter.
The researchers have already prototyped a fiber type solar cell with a "tandem structure" where 2 pigments with absorption peaks in different wavelength ranges are used in the cell. If a pigment with a high absorption rate can be found for the near infrared and other wavelength ranges, then the number of contacts could be increased almost without limitation by using the different pigments in different parts of the fiber.
By Alan Johnson, Technical Analyst
Top image: The prototype painted with two kinds of pigments. Source: Tech On
For more attend: Energy Harvesting and Storage Europe 2009
Also read: Energy Harvesting and Storage for Electronic Devices 2009-2019