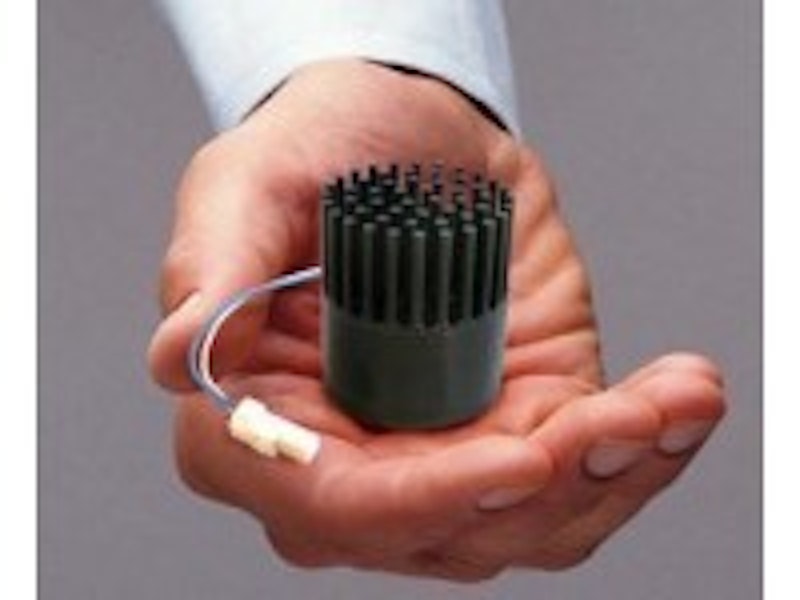 Thermoelectric generators directly convert waste heat into electricity. The Perpetua Power Puck is the first to use a thermoelectric semiconductor on a flexible substrate and because they're flexible the pucks - which have pins to disperse excess heat - can conform to curved heat producing surfaces such as hot water pipes or pumps. Initially the pucks are being marketed as power sources for wireless sensors at sites such as power plants and dams. Affixing the gadget to a surface just 10 degrees Celsius warmer than the surrounding temperature can produce more than five volts and several hundred microwatts of power, enough for a typical wireless sensor.
First developed by the US Department of Energy's Pacific Northwest National Laboratory (PNNL), the energy harvester technology was introduced to the private sector when a group of University of Oregon graduate students created a business plan and marketing strategy for the technology through the joint UO/PNNL. Along with technology veterans from Hewlett-Packard, one of the students founded Perpetua Power to commercialize the technology. The company received an exclusive license from PNNL to incorporate the technology into its new product called the Perpetua Power Puck™. It's currently being marketed for industrial automation, military and other uses.
The Thermoelectric Ambient Energy Harvester produces electricity whenever there is a temperature difference across the device's two ends. Energy harvesters replace or extend the life of traditional batteries used in wireless sensors or radio frequency transmitters. Not having to travel to remote locations to check on batteries in equipment that monitors the integrity of dams or pipelines, for example, saves valuable time and money. Energy harvesters are expected to last as long as the sensors and transmitters they power.
Engineered to be paired with a wireless sensor module, the Perpetua Power Puck series is designed to provide reliable energy for the life of a wireless system. Power Pucks can save multiple battery replacement cycles, leading to significant cost savings and reduction of batteries in landfills.
Source Perpetua Power Source Technologies Inc
Top image: Perpetua Power Puck. Source: Perpetua Power
For more attend: Energy Harvesting and Storage Europe 2009
Also read: Energy Harvesting and Storage for Electronic Devices 2009-2019