Scientists have created a new battery fuelled by air - with the potential for 10 times the storage capacity of conventional cells. This step-change in capacity could pave the way for a new generation of electric cars, mobile phones and laptops.
Funded by the Engineering and Physical Sciences Research Council, the £1.5m project is being carried out jointly by researchers at Newcastle University, the University of St Andrews and Strathclyde University. Newcastle lead Professor Keith Scott said the results so far had been very exciting.
"Here at Newcastle we are developing the new air-electrode interface - the part of the battery where the reaction takes place," explains Prof Scott, professor of electrochemical engineering at Newcastle University."The cells are charged in a traditional way but as power is used or 'discharged' an open mesh section of battery - the interface - draws in oxygen from the surrounding air. This oxygen reacts with a porous carbon component inside the battery, which creates more energy and helps to continually discharge the cell."
The new design has the potential to improve the performance of portable electronic products and give a major boost to the renewable energy industry. The batteries will enable a constant electrical output from sources such as wind or solar, which stop generating when the weather changes or night falls. Improved capacity is thanks to the addition of a component that uses oxygen drawn from the air during discharge, replacing one chemical constituent used in rechargeable batteries today. Not having to carry the chemicals around in the battery offers more energy for the same size battery. Reducing the size and weight of batteries with the necessary charge capacity has been a long-running battle for developers of electric cars. 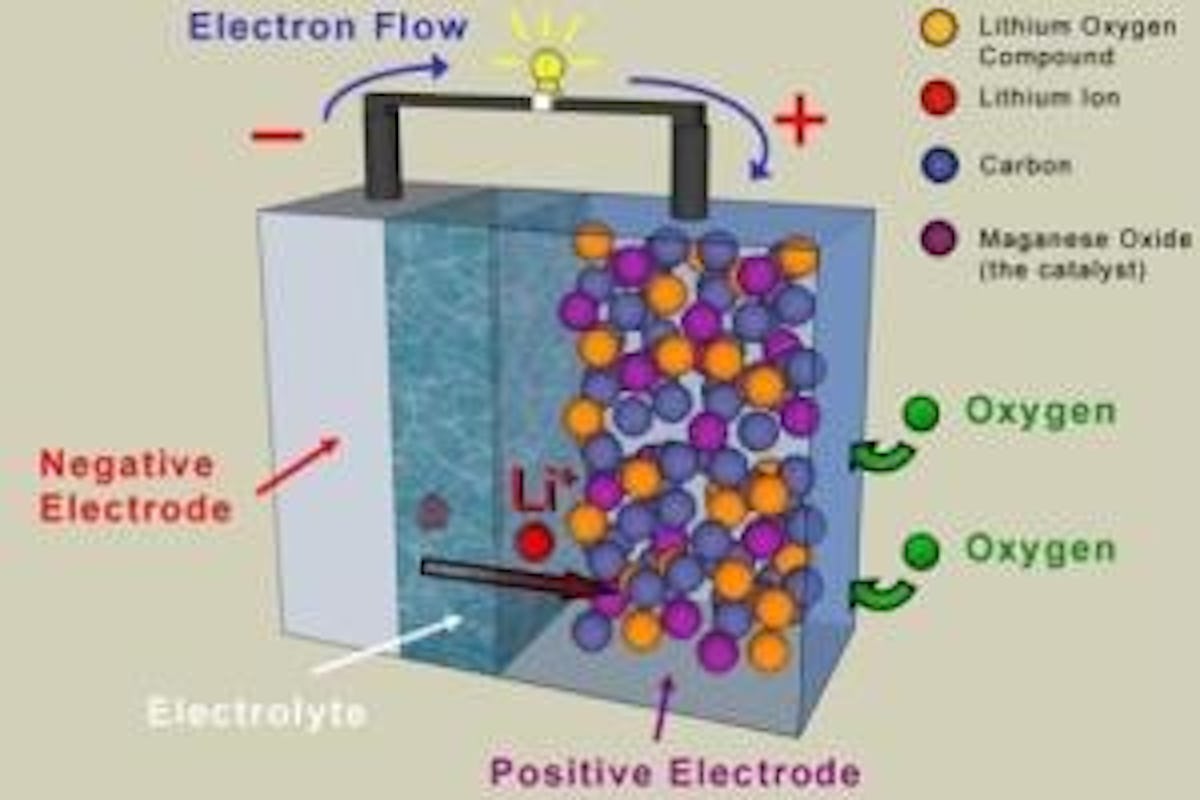 Source: Newcastle University
The STAIR (St Andrews Air) cell should be cheaper than today's rechargeables too. The new component is made of porous carbon, which is far less expensive than the lithium cobalt oxide it replaces.
This four-year research project reaches its halfway mark in July 2009. Principal investigator on the project, Professor Peter Bruce of the University of St Andrews, said: "Our target is to get a five to ten fold increase in storage capacity, which is beyond the horizon of current lithium batteries. Our results so far are very encouraging and have far exceeded our expectations. The key is to use oxygen in the air as a re-agent, rather than carry the necessary chemicals around inside the battery."
The project is focused on understanding more about how the chemical reaction of the battery works and investigating how to improve it. The research team is also working towards making a STAIR cell prototype suited, in the first instance, for small applications, such as mobile phones or MP3 players.
Source Newcastle University
Top Image: Professor Peter G Bruce of the University of St Andrews. Source: University of St Andrews
For more attend: Energy Harvesting and Storage Europe 2009
Also read: Energy Harvesting and Storage for Electronic Devices 2009-2019