Motoring without the gas station

Electric vehicles, whether hybrid or pure electric, increasingly harvest by regenerative braking and solar panels on the roof. Harvesting from shock absorbers is being developed at MIT and vibration harvesting is possible. These cars often dock under solar panels used to recharge them. Hybrid cars are a great success. In addition, pure electric cars are at last moving beyond the golf car and neighbourhood vehicle stage with serious volumes beginning to be sold. The profitable Tesla pure electric sports car with a 550 vehicle backlog, at a retail price of over $100,000 each, and a new $465 million government loan has attracted nearly 10% shareholding from Daimler Benz as the major car companies play catch up with this option. Indeed, Nissan is now giving pure electric priority over hybrid and assisting with the necessary charging infrastructure in several countries and it sees 10% of cars produced in 2020 being pure electric. Hybrids will be much more.

All the major car manufacturers are now racing to bring out both hybrid and pure electric models. They do not want the world's largest car company Toyota, which sells far more hybrids than anyone else, to pull even further ahead. Most of them have been in denial in the past, limiting their effort to such things as the dream of ubiquitous fuel cell powered cars which are always ten years away. Governments faced the global financial meltdown threatening the jobs of hundreds of thousands of voters in the car industry. Those governments exhibited increasing concern about reliance on ever scarcer oil from unreliable sources. They could also see the threat of global warming from belching transport. As a consequence, suddenly, there is approaching $60 billion available for the electric car of the future, its components and its enabling technologies - enough to make IBM enter the battery business and Intel think about joining it.
There are probably around 150 organisations planning to make electric cars. It is like the early part of the twentieth century all over again but this time with success in sight. Many have yet to declare their hand but IDTechEx has looked at eighty that are known to be active and their geographical distribution is as follows.
Geographical distribution of 80 companies making or intending to make hybrid or pure electric cars. 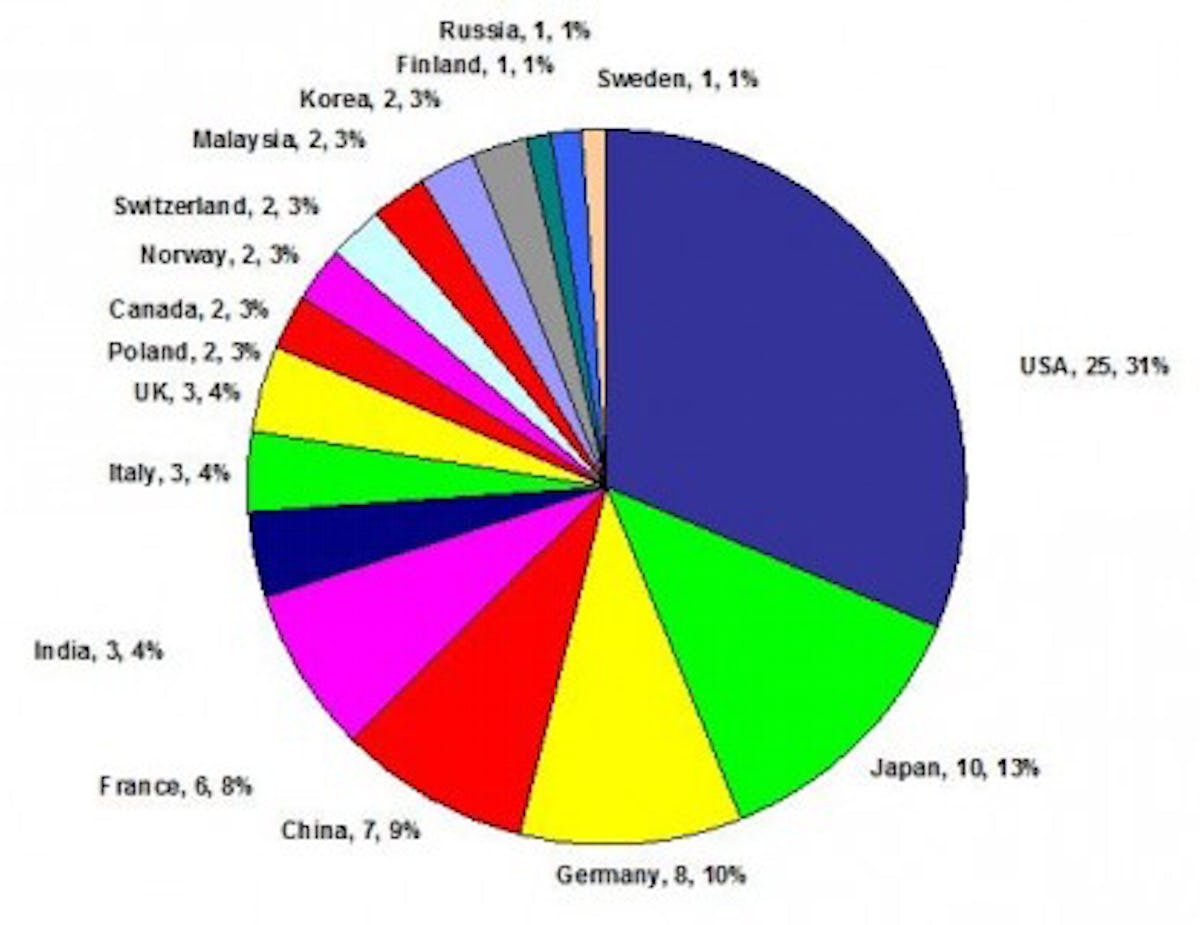 All this is enough to make some of the world's largest electricity supply companies look at provision of recharging sockets nationwide, wherever a car stops for a reasonable period of time. They can gain income both from access charges and from selling the electricity and get the kudos of helping to save the planet as their power sources become ever greener.

The warm up in this great saga is the mild hybrid and the pure electric car with a range of only 50 miles or less. Mild hybrids are not a disruptive technology. They cannot be plugged in and they are used in much the same way as a regular car. They still pollute though sometimes at as little as one tenth of the conventional level. They use gasoline but not necessarily less than the equivalent conventional cars. At best they do twice the miles to the gallon. Pure electric vehicles with only 50 miles or so in range are touted as suitable for almost everyone because that is the maximum distance people typically drive. This completely misses the point that most people want to feel they can change their mind during a journey and go much farther, for instance to deal with an emergency. Anyway, most people lack the space to park two cars - one for short distance and one for long distance.

What is really needed

What most people require is a single vehicle that saves money over its life, without inhibiting their options during travel. For a few, saving the planet and local jobs would also be a nice outcome of their choice of car. Preferably, the new models should be more fun to drive and more versatile and that will indeed be on offer. This is the affordable plug in hybrid and the affordable pure electric vehicle that have all electric ranges of hundreds of miles. Currently, mild hybrids have more parts and cost more to make than conventional cars and plug in hybrids are even more costly. However, IDTechEx believes that, within the decade, some manufacturers will be able to sell them at no price premium over the conventional equivalent, severely compromising competition. Then there will be no sensible reason for buying a conventional car other than unavailability of that particular model in hybrid form. Even here we can be optimistic because Toyota has promised hybrid versions of all models. Competitors offer less at their peril. We expect at least sixty new models of hybrid car, mostly plug in hybrid, worldwide between 2010 and 2013.

Pure electric cars are the obvious end game. We knew that since Thomas Davenport demonstrated the first one in 1834. However, forecasting their sales is more hazardous because they are easier to make, at least in primitive form, and that has meant that, unlike the situation with hybrids, hundreds of underfunded manufacturers have come and gone and many current participants look fragile. Will the lithium air battery be tamed? What about zinc air? Will these huge batteries last ten years or burden us with unaffordable replacement costs? Will Bolivia and China ration lithium, making it unaffordable? There are these and many other uncertainties but pure electric family cars with hundreds of miles of range are starting to be demonstrated.

This brings us to the question of infrastructure. In contrast to the eye watering cost of envisaged fuel cell infrastructure, provision of electric charging points is trivial in the extreme. At first they will be needed only at home and at destinations such as work and the leisure center because today few vehicles can be charged in the time it takes to stop at a gas station. Mostly, single phase regular power will be provided at negligible cost by extension of existing electricity supplies in buildings. Some organisations will provide the electricity free of charge as a service to employees or say country club members. Others will have the socket coin or card operated - another form of vending machine and a nice new earner for car parks. Some three phase fast charging will be provided. Later, it will be feasible to recharge while you nip into the shop using a roadside socket.
Less certain is the plan to have batteries replaced with charged batteries using robotics. This is planned for parts of California and elsewhere but there will need to be standardisation of shape and fixing of the huge batteries involved and the cost and real estate for such equipment is surely considerable. Indeed, there is the danger that, having made that investment, affordable fast charging batteries will be fitted by the car makers, removing the need for battery replacement but maybe it has a place for some of the market.

IDTechEx believes that the installation of recharging points is a one way bet. If plug in hybrids do not use them, then pure electric cars will. In fact we see both being an eager market, which brings us to the question of just how many cars will regularly avoid the gas station and recharge with electricity during the journey, even if it is only at destination, before returning home.
In researching its new report "Hybrid and Pure Electric Cars 2009-2019" www.IDTechEx.com/evcars, IDTechEx calculated that over one million vehicles (hybrid and pure electric) will be plugged in during the journey in 2015 and that figure will be over 16 million in 2019 because the rapidly increasing sales of hybrids and pure electric cars and the rapidly increasing percentage of hybrids that are plug in gives a multiplier effect.
The rapid growth in sales of hybrids is particularly driven by the rapid growth in financial incentives and new models being announced in earlier years. We forecast from 35-45% of car sales in 2025 being hybrid or pure electric. Several major car manufacturers take the same view. However, we are on an exponential here and that means slow growth initially. As an example, a snapshot of plug in vs mild hybrid cars in 2014 is given below, showing that, by then, most of the electric cars sold will have that magic plug. There is even an upside in the possible percentage of hybrids that are plug in at that time. However, we must avoid confusing hope with reality. Plug ins need much larger batteries, stealing precious space, and they have other added costs for re-engineering. Many models may only be available in a mild hybrid form for some years after they appear with even that option. We are not starting with many models that are even mild hybrid today so it will be one step at a time. The motor industry takes a long time to change.
Comparison of plug in and other electric car sales, including golf cars and neighborhood electric vehicles, in 2014 in thousands globally. 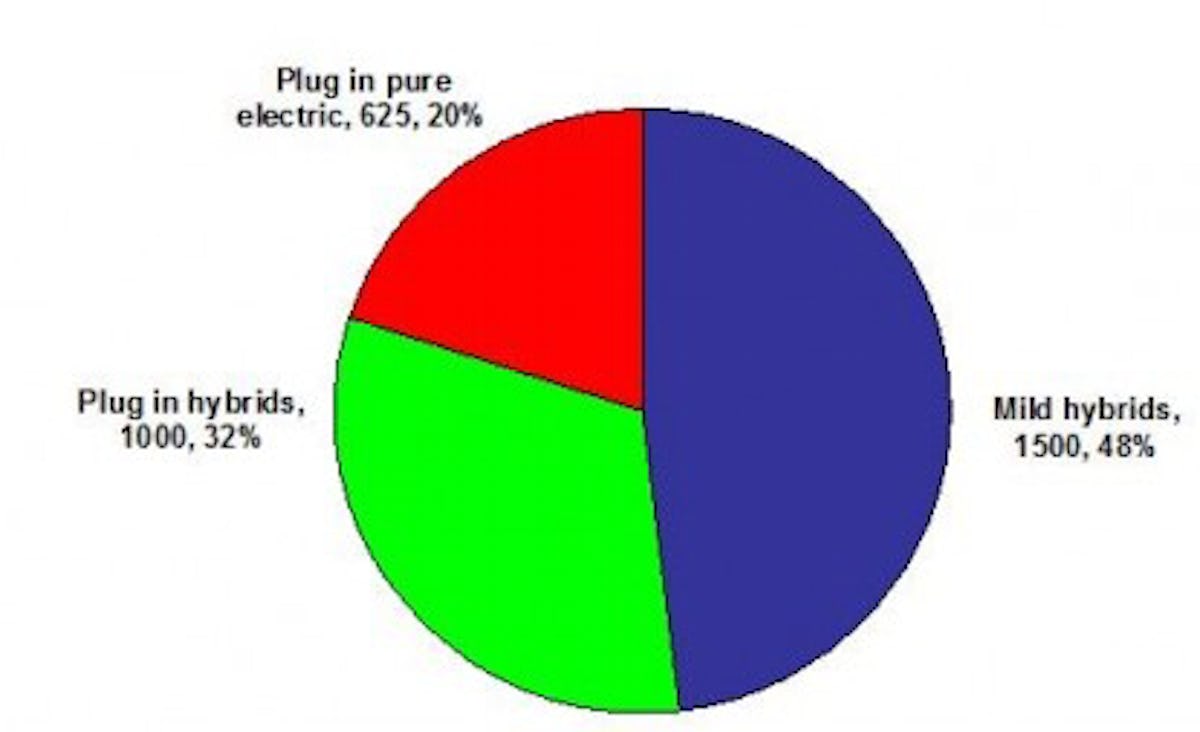 Source IDTechEx report "Hybrid and Pure Electric Cars 2009-2019" www.IDTechEx.com/evcars
The number of drivers actually plugging in during a journey is another matter. The report gives more detail and concludes that the extra load on national electricity grids will be easily manageable. The report is updated regularly to cover this fast moving topic. For more information see www.IDTechEx.com/evcars.
And gas stations? By the end of the decade, they will be seeing the impact of hybrid and pure electric vehicles but they will not be out of business or anywhere near to it. Most cars will still be gasoline or biofuel. Many gas stations will be recharging cars with electricity: after all, they already have safe electrics at the pump, so it would be wrong to say it is impossible to mix electric and gasoline at one location.
Top image of Tesla electric car, source Gizmodo
For more attend: Energy Harvesting & Storage USA 2009
Also read: Energy Harvesting and Storage for Electronic Devices 2009-2019
Hybrid and Pure Electric Cars 2009-2019
Car Traction Batteries - the New Gold Rush 2010-2020