Defence Advanced Research Projects Agency (DARPA) is conducting a Hybrid Insect MEMS (HI-MEMS) program which is aimed at developing technology that provides more control over insect locomotion. This is done by developing tightly coupled machine-insect interfaces by placing micro-mechanical systems inside the insects during the early stages of metamorphosis.
HI-MEMS derived technologies will enable many robotic capabilities at low cost, impacting the development of future autonomous defence systems. The development of cyborgs with most of the machine component inside the insect body will create robots that use muscle actuators which have been developed over millions of years of evolution. The basic technology developed in this program could also be used to understand and control insect development through better understanding of tissue development, and provide new technological pathways to harness the natural sensors and power generation from insects. 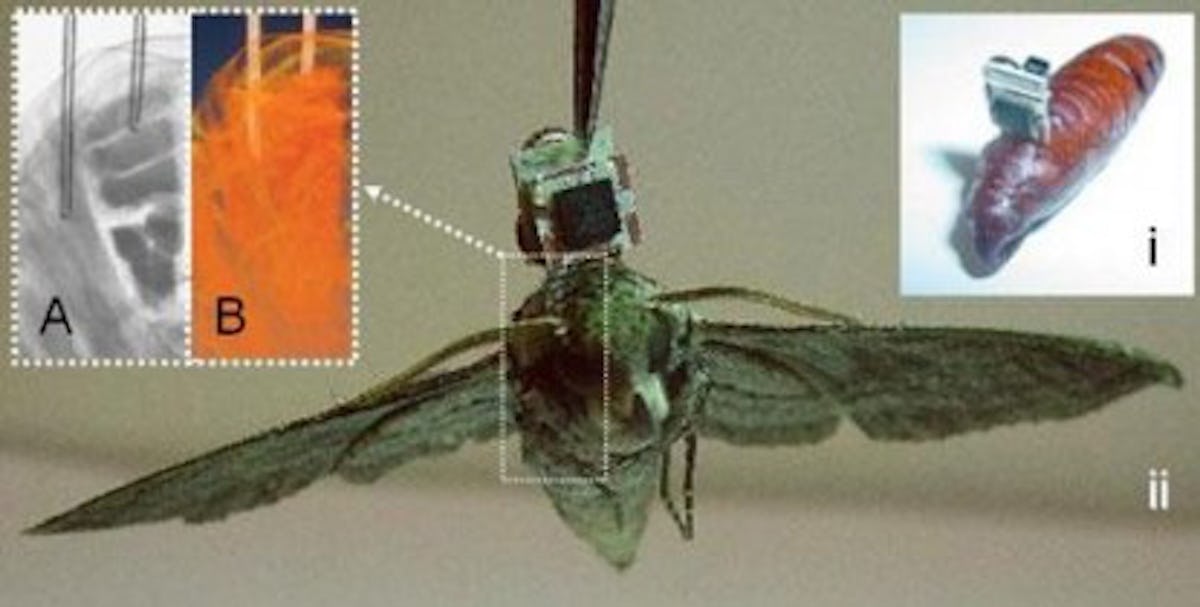 Source: Boyce Thompson Institute
Microchips are implanted into the insects at the early stages, such as the caterpillar and the pupae stages. Since most of the tissue development in insects occurs in the later stages of metamorphosis, the renewed tissue growth around the MEMS will tend to heal, and form a reliable and stable tissue-machine interface. The goal of the MEMS, inside the insects, will be to control the locomotion either from GPS coordinates, or using RF, optical, ultrasonic signals based remote control. The intimate control of insects with embedded microsystems will enable insect cyborgs, which could carry one or more sensors, such as a microphone or a gas sensor, to relay back information from the target destination.
Researchers have been successful embedding MEMS into moths at an MIT-led team and another moth project at the Boyce Thompson Institute for Plant Research, and were able to control the flight of tethered moths. The goal is to convert the heat and mechanical energy the insect generates as it moves into electricity, rather than relying on batteries. The insects themselves could be optimized to generate electricity.
Source: DARPA
Top image source: DARPA
For more attend: Energy Harvesting & Storage USA 2009
Also read: Energy Harvesting and Storage for Electronic Devices 2009-2019
Harvesting needed for robot flies
Energy harvesting for robots

I wrote "The Incredible Shrinking Bee" in 2006 Imperial College Press having to do with circulations and miniaturization. I would like to keep in touch with these new developments avoiding the need for batteries. jl

Was watching a bug caught in spiderweb the energy it used trying to get out was out of this world if we could use the web some how to produce energy threw bugs trying to survive.the spider is very small can hardly see it caught a big Beatle of sort was on bottom of my Harley tire these spiders like close to the ground will connect there web to anything