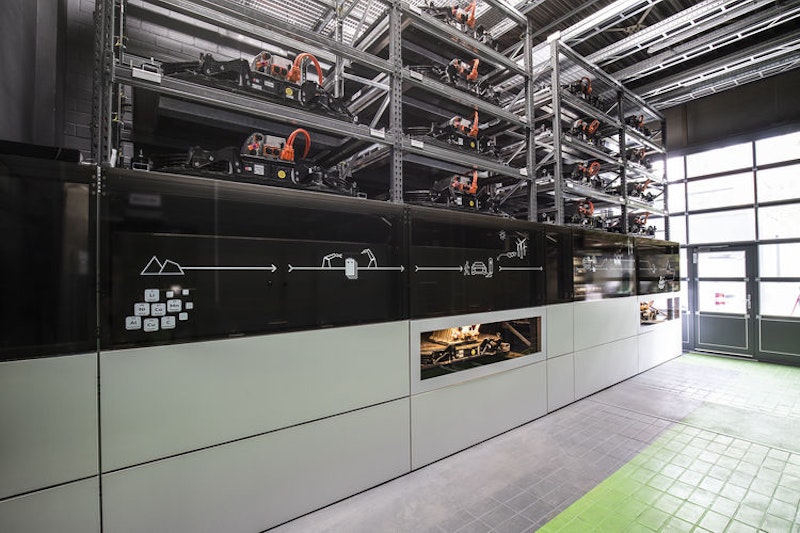 Audi has opened up Germany's largest multi-use storage unit on the EUREF Campus. The storage unit has a capacity of 1.9 MWh and uses used lithium-ion batteries from development vehicles to test various interaction scenarios between electric cars and the power grid. The objective: Intelligent networking to promote the energy transition. For more information see the IDTechEx report on Second Life Electric Vehicle Batteries 2019-2029.
Audi has committed to emissions-free mobility and set clear goals on the way to this vision: As early as 2025, around 40 percent of all newly sold Audi models are to be equipped with an electrified drive. By the middle of the coming decade, this is equivalent to roughly one million electrified cars per year. As the number of electric models rises, a huge mobile energy storage unit is growing with it. It carries a great deal of potential, provided that intelligent use is made of the storage capacity. It is therefore particularly important to integrate electric vehicles into the energy industry.
If one in ten passenger cars in Germany were electric, this would correspond to a flexible energy storage unit with a capacity of almost 200 GWh. Connecting electric cars with renewable energies in an intelligent way can have a positive effect on the energy transition. This would allow charging with solar or wind power, depending on what is available. Further, it would potentially allow flexible reactions to short-term power fluctuations in the grid. Audi is cooperating with partners from the energy industry (e.g. The Mobility House) to turn this vision into reality.
The storage unit on the EUREF Campus that is testing this concrete use case spans an area of around 110 square meters (1,184.0 sq ft) and serves as a real-life laboratory for further applications. It is connected to Berlin's medium-voltage power grid with one megawatt of power, which corresponds to the average charging requirement of around 200 electric cars. With its capacity of 1.9 MWh, the storage unit could supply the entire 5.5 hectare office and science campus with electricity independently for just under two hours.
Rapid-charging stations in the immediate vicinity, where electric cars can charge with up to 175 kW, are a further use case. To ensure that the high electricity requirement is covered in the most cost-efficient way possible and the local power grid is not put under excessive strain, the battery storage unit functions as a buffer here, too. Intelligent integration into the power grid allows the energy reservoir to absorb excess electricity from wind power and photovoltaic systems or the campus's own combined heat and power plant. This compensates for fluctuations in the grid, counteracts local peak demands, and helps prevent blackouts by stabilizing the transmission network. Smoothing load peaks and compensating for frequency fluctuations in this way reduces energy costs thanks to high levels of efficiency and fast response times. In addition, the power supply is optimized in terms of its CO2 neutrality.
Due to the large portion of renewable energies with varying electricity generation in the surrounding area, Berlin offers ideal conditions for the development of intelligent charging control that may be expanded to include a growing number of electric cars as buffer storage in the future. The project partners intend to conduct a model experiment with wind farms in Brandenburg and Mecklenburg-West Pomerania to show how excess green electricity can be buffered on the EUREF Campus in a targeted manner. Wind turbines would no longer have to be taken off the grid in the event of temporary excess electricity production. It is a small building block for a sustainable world of energy and an addition to the industrial storage of large volumes of excess electricity that Audi has been practicing with its power-to-gas plant in Werlte since 2013.
Aside from research on interfaces for intelligent integration into the power grid of the future, the battery storage unit on the EUREF Campus provides further insights that will be incorporated into future projects. Audi engineers are testing the use of stationary energy storage units in the power grid, thereby creating a way to reuse used batteries from electric cars—a sensible and resource-conserving application since batteries retain the majority of their capacity after being used in cars. In addition, Audi is developing concepts for an effective way to recycle batteries from used modules.
Source and top image: Audi