The Arrecife project designed by Arrecife Energy Systems in Spain, is about to begin a second round of testing in the open seas. The project was born thanks to the research of Ph.D. Professor José Javier Doria who, after years of experimentation, could demonstrate a formula to be followed in the design of turbines and different aerofoils. For more information see the IDTechEx report on Wave, Tidal and Hydro Power 2018-2038.
What started as a study of the number of blades that could be introduced in the production of a turbine, eventually became a long investigation which has obtained great results. Prof Doria noted that tiny living corals occupy vast extensions, forming a reef able to absorb much of the energy of waves in an efficient manner. This led to the idea of creating direct action turbines placed in series, composed of many blades simulating a coral reef.
Arrecife is designed to work with the most common wave size which is from 1 to 5 metre high waves (98%), which means more efficiency in energy production, working at full capacity during more hours.
Arrecife is provided with cross-flow turbines that are activated by waves, following the example of other successful systems such as hydraulic energy or wind energy systems that work with turbines. It is provided with an immersion system that will be operated in storms when the system submerges partially to prevent damage by waves. The wave energy harvester can be adapted to any sort of mooring: single anchor, dead weight, chain, jackets or pilots among others. It can be transported by a tugboat, which enables it to be repaired on land but can also be maintained on site in the ocean.
Arrecife is vertically positioned through ballast. Similar to an anchored boat, the system is orientated by the waves' direction and the turbines transform the movement of the waves into electricity through generators. 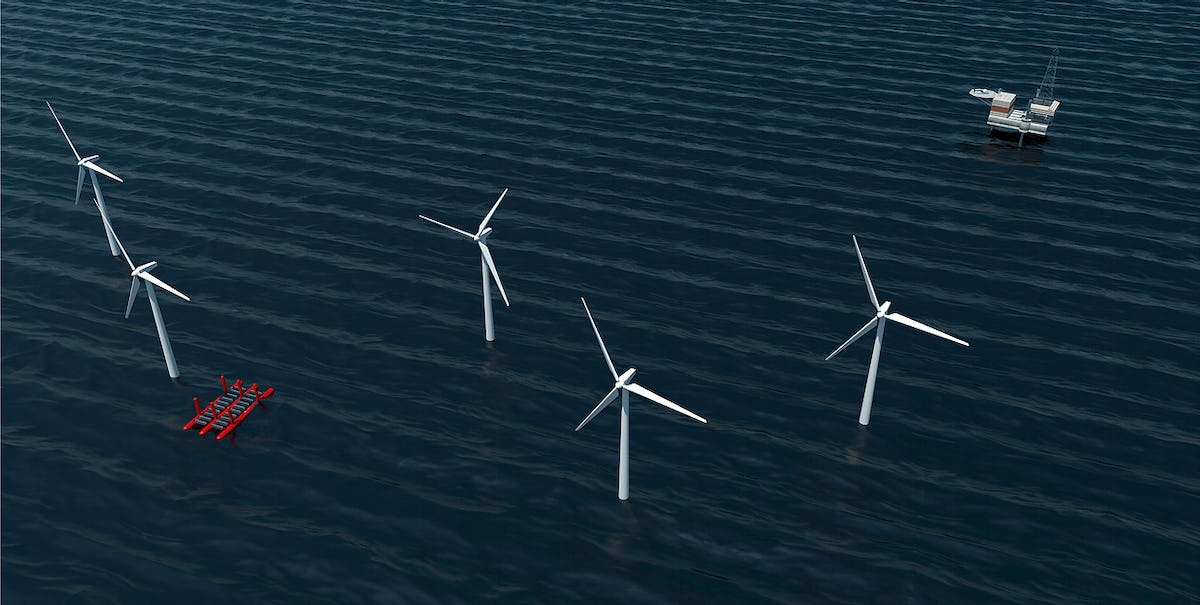 The system can be installed offshore and comes in three different sizes:
ARRECIFE 75kW
Designed for small applications.
Isolated places, islands or to charge solar panels batteries.
ARRECIFE 440kW
Designed to work all around the world.
Through its standardized design, the manufacturing cost is reduced.
ARRECIFE 2MW
Big power and production model.
It is the optimum model for exploiting marine energy in strong power areas from 70 kW/m
Iñigo Doria says. CEO of Arrecife Energy Systems says "We are right now well in discussions with an oil and gas company to install in one of their oil and gas platforms because they're using diesel generators and they are spending a lot of money."
Source and images: Arrecife Energy Systems
Top image: Solar Impulse Foundation