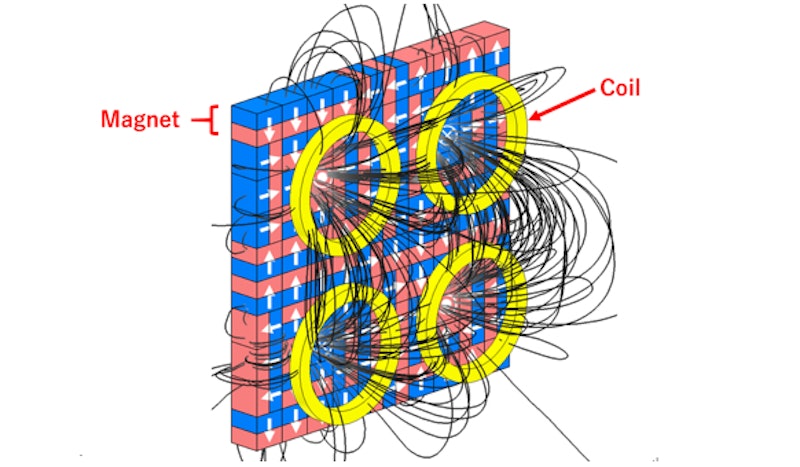 Fujitsu Laboratories Ltd has shown the capability of the Digital Annealer, Fujitsu's computational architecture inspired by quantum phenomena that rapidly solves combinatorial optimization problems, to maximize the performance of magnetic devices essential for renewable energy harvesting and other uses. The application of Fujitsu's next-generation architecture allows for the nearly instantaneous calculation of the optimal arrangement of multiple planar (2D) magnets to maximize the strength of the magnetic field in a device. For more information see the IDTechEx report on Energy Harvesting Microwatt to Megawatt 2019-2029.
Many magnetic devices used for environmental power generation create magnetic flux through the arrangement of a large number of small magnets. The optimal planar (2D) arrangement for maximizing power generation efficiency remains difficult to calculate due to the enormous number of potential combinations of magnet arrangements, however. To overcome this challenge, Fujitsu has developed a technology that utilizes its Digital Annealer to calculate in a matter of seconds how to arrange each individual magnet to achieve maximum magnetic flux density, delivering an efficiency gain of 16%.
This technological breakthrough now makes it possible to quickly calculate the optimal design for magnetic devices with significantly higher power generation efficiency, and will ultimately contribute to the spread of power generation devices that utilize renewable energy such as energy harvesting devices.
This technology was developed in collaboration with Professor Hajime Igarashi of Hokkaido University's Institute of Information Science, and an abstract outlining the technology will be presented at the COMPUMAG 2019 (The 22nd International Conference on the Computation of Electromagnetic Fields) conference held in Paris, France from Monday, July 15th.
Background
Energy harvesting devices, which convert vibrations from motors, engines, bridges and buildings into electricity, are increasingly attracting attention. The technology underpinning these devices eliminates the need for power transmission cables, battery replacement and charging as a means of supplying electricity to IoT devices installed both indoors and outdoors, as well as for on-board power supply for wearable devices and automotive components. While adopting this technology presents an attractive solution in a variety of practical contexts, further improvements in the efficiency of energy harvesting devices will prove essential to solving the greater environmental and energy problems facing humanity.
Issues
Energy harvesting devices convert vibrations into electrical power using the physical phenomenon of electromagnetic induction produced by permanent magnets and coils. To maximize the power generation efficiency of an energy harvesting device, the magnitude of the magnetic flux density emanating from the many magnets located within the device must be maximized relative to the location of the coil.
At present, the layout in which a number of magnets is arranged in a row (One Dimension) with a concentration of magnetic flux on one side is well-known. Arranging the magnets in a planar shape (2D) will prove effective in increasing the amount of power generated, leading to the achievement of devices with even greater efficiency in the future. Since the arrangement of the magnets arranged in a planar shape (2D) is complicated, however, designers face a formidable challenge when searching for the optimal arrangement of magnets that maximizes flux density near the coil. In fact, the number of possible combinations of magnet orientations when 10 x 10 magnets are arranged in a square shape along a 3- dimensional coordinate axis is more than 77 to the power of 10.
The Newly-Developed Technology
Fujitsu has embarked on a collaboration with Professor Hajime Igarashi of Hokkaido University's Institute of Information Science to develop a technique for calculating the optimal arrangement of planar magnets using the Digital Annealer, which is a unique computing architecture that simulates quantum behavior to rapidly solve combinatorial optimization problems not feasible for conventional computers.
For the Digital Annealer, problems must be defined over binary (0 and 1) variables. In this study, the direction of a magnet that can be oriented along the 3 axes of X, Y, and Z is expressed by 3 bit variables, and the magnetic flux density generated is formulated using the variable and Bio-Savart's law, one of the laws of electromagnetism, and an objective function (function whose value should be maximized) as a combinatorial optimization problem in which the magnetic flux density is maximized for a specific part. Furthermore, by adding a new variable to the objective function so that it can be formulated in the QUBO(1) format, the Digital Annealer it can calculate the optimum design structure for planar magnet arrays.
Outcome
Using Fujitsu's Digital Annealer, it was possible to calculate the optimum design of a planar (2D) magnet array from a vast number of potential combinations. The simulation confirmed that the design optimization problem of 10 x 10 2-dimensional magnet arrays can be solved in a few seconds. By using the resulting array, we were able to improve the magnetic flux density by 17% and the power generation efficiency of the energy harvesting device by 16% compared with the conventionally-designed 2-dimensional array. This technology is also expected to be applied to the optimization of magnet arrays for linear motors, where magnetic flux density must be controlled as intended for higher performance.
Future Plans
Fujitsu Laboratories will contribute to the further development of magnetic devices used in energy harvesting, etc., by implementing this technology as one of the professional services for Digital Annealer in fiscal 2020.
About Fujitsu Ltd
Fujitsu is a leading Japanese information and communication technology (ICT) company, offering a full range of technology products, solutions, and services. Approximately 132,000 Fujitsu people support customers in more than 100 countries. We use our experience and the power of ICT to shape the future of society with our customers. For more information, please see www.fujitsu.com