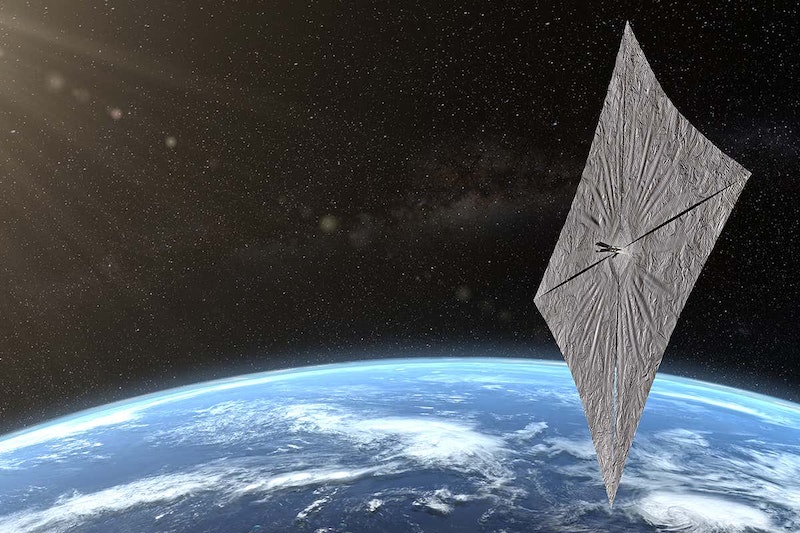 The Planetary Society's LightSail 2 spacecraft has successfully deployed the large, aluminized Mylar sail it will use to raise its orbit solely with sunlight. For more information see the IDTechEx report on Energy Harvesting Microwatt to Megawatt 2019-2029.
Flight controllers at Cal Poly San Luis Obispo in California commanded the spacecraft to deploy its solar sails and images captured during the deployment sequence show the 32-square-meter sail, which is about the size of a boxing ring, deploying as the spacecraft flew south of the continental United States.
Sail deployment marks a major milestone for the LightSail 2 mission, which aims to demonstrate solar sailing as a viable method of propulsion for CubeSats—small, standardized satellites that have lowered the cost of space exploration.
"Yesterday, we successfully set sail on beams of sunlight," said Bill Nye, CEO of The Planetary Society. "Thanks to our team and our tens of thousands of supporters around the world, the dream started by The Planetary Society's founders more than 4 decades ago has taken flight."
Bruce Betts, Planetary Society chief scientist and LightSail program manager, added, "We're ecstatic! The mission team has worked for years to get to this moment when we can start solar sailing."
Following the start of sail deployment on 23 July, telemetry from LightSail 2 showed the spacecraft's small motor was rotating properly, extending four, 4-meter cobalt-alloy booms from their central spindle. The booms unwind like carpenter's tape measures and are attached to 4 triangular sail sections that together form the square solar sail.
Though the motor activity itself was a good indicator of success, confirmation that the sails deployed successfully was only possible via imagery from LightSail 2's dual cameras. The cameras have 185-degree fields of view, and together can image the entire sail from the main LightSail bus, which is about the size of a loaf of bread.
"The successful deployment of the solar sail and the onset of sail control completes our critical post-launch phase," said LightSail 2 project manager David Spencer. "Now we are prepared for the solar sail's mission, to track how the orbit changes and evaluate solar sailing performance."
The deployment milestone comes 4 weeks after LightSail 2 launched from Kennedy Space Center, Florida aboard a SpaceX Falcon Heavy rocket, and 3 weeks after the Georgia Tech student-built Prox-1 spacecraft deployed LightSail 2 into orbit. The mission team spent a week checking out the spacecraft's systems before rescheduling sail deployment to allow extra time for testing and tuning the attitude control system.
Preliminary data shows LightSail 2 is already turning its solar sail broadside to the Sun once per orbit, giving the spacecraft a gentle push no stronger than the weight of a paperclip. Solar photons have no mass, but they have momentum, and as they reflect off the solar sail, some of that momentum is transferred and creates thrust. While this thrust is slight, it is continuous and over time will raise LightSail 2's orbit.
The orbit-raising portion of the mission will last about 1 month. LightSail 2 does not have the capability to circularize its orbit—as one side of the spacecraft's orbit raises due to solar sailing, the other side will dip lower into Earth's atmosphere, until atmospheric drag overcomes the slight force from solar sailing. LightSail 2 is expected to reenter the atmosphere in roughly 1 year.
Source and top image: The Planetary Society