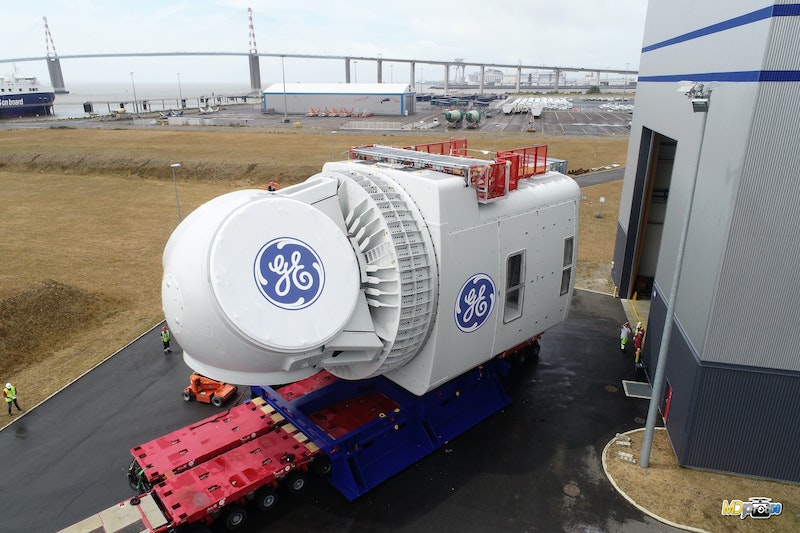 Today, GE Renewable Energy revealed the first manufactured components of the Haliade-X 12 MW offshore wind turbine at its production site in Saint-Nazaire, France. The new offshore wind turbine boasts unparalleled dimensions and the use of advanced technologies. For more information see the IDTechEx report on Energy Harvesting Microwatt to Megawatt 2019-2029.
GE has taken a new step towards launching the Haliade-X 12 MW to the market, as planned for 2021
The first nacelle revealed today will be shipped from Saint-Nazaire to Rotterdam-Maasvlakte in the Netherlands over the coming weeks, where its components will be assembled into the Haliade-X 12 MW prototype to be tested there. The prototype will be installed on land to simplify access for testing. This initial phase is designed to allow GE Renewable Energy to obtain the data required to receive its type certification—a key component prior to commercializing the product in 2021.
In parallel, a second Haliade-X 12 MW nacelle is currently being assembled at Saint-Nazaire, prior to dispatch to the ORE Catapult test centre at Blyth, in the United Kingdom, in the coming months. The nacelle will be testing in actual operational conditions to reduce the time required to confirm its performance levels and reliability.
GE continues to develop the offshore wind turbine segment
The Saint-Nazaire production site is dedicated to manufacturing offshore wind turbine generators and nacelles and has already assembled over 80 Haliade 150-6MW wind turbines since opening in December 2014. Significant projects include the development of turbines for Block Island, the first ever offshore wind farm in the U.S., the Xinghua Gulf project in China, and the Merkur offshore wind farm in Germany.
GE continues to innovate with the development of Haliade-X, supporting its customers in an increasingly competitive and rapidly growing market
The Haliade-X 12 MW's market-leading nacelle and 107-m long blades will allow GE Renewable Energy customers to generate more power more effectively, in an environment in which they face increased competition. The turbine can generate 67 GWh in gross annual energy, providing enough clean energy to power 16,000 European households and save up to 42 million metric tons of CO2, which is the equivalent of the emissions generated by 9,000 vehicles in one year alone.
Jérôme Pécresse, GE Renewable Energy CEO, declared "Today's presentation of the first ever Haliade-X 12 MW nacelle at Saint-Nazaire is the start of a key new phase in our ongoing commitment to structuring the offshore wind turbine segment. This project clearly reflects our ability to invest and innovate, supporting our customers on an ultra-competitive market in exponential growth. Thanks to the Haliade-X 12 MW, we are proud to prepare for the future of the offshore wind industry from Saint-Nazaire, a benchmark production site for offshore wind international projects."
According to John Lavelle, GE Renewable Energy Offshore Wind CEO, "We are on track to start commercializing this new product very shortly. Once we have received the type certificate (2020), we will be ready to start mass production and send out the first commercial units by mid-2021. Haliade-X 12MW is an outstanding and strategic project for GE. We aim to meet the requirements of our customers by providing a more affordable and competitive energy source."
Source and top image: GE