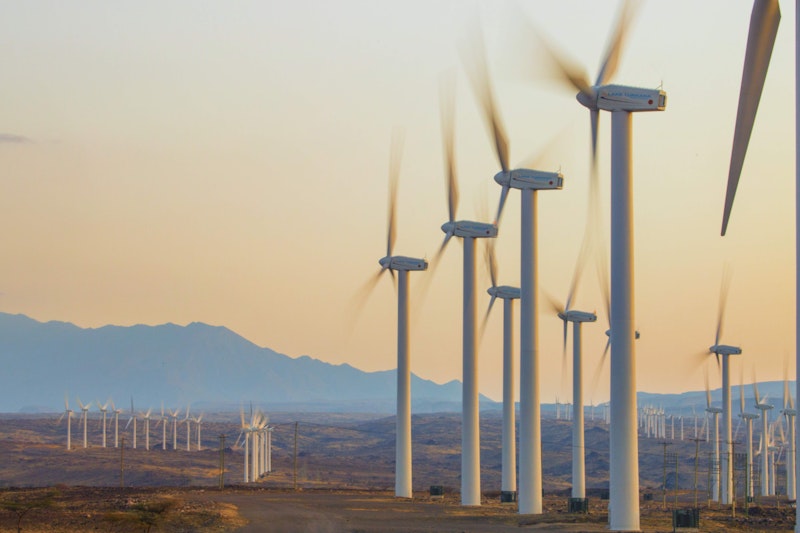 Kenyan president Uhuru Kenyatta has officially inaugurated the 310MW Lake Turkana Wind Power project. The joint ceremony for the inauguration of the wind farm and the commissioning of the 438km Loiyangalani-Suswa transmission line which connects the wind farm to the national grid was held at the wind farm site in Loiyangalani Sub-County, Marsabit County. For more information see the IDTechEx report on Energy Harvesting Microwatt to Megawatt 2019-2029.
The Lake Turkana Wind Power project (LTWP) is located in Loiyangalani District, Marsabit County, Kenya. It comprises of 365 wind turbines, each with a capacity of 850kW, and a high voltage substation that has been connected to the Kenyan national grid through an associated Transmission Line; constructed by the Kenyan Government.
The wind farm is providing reliable, low cost energy to Kenya's national grid (i.e. approx. 17% of the country's installed capacity), which will be bought at a fixed price by Kenya Power & Lighting Company Ltd (KPLC) over a 20-year period in accordance with the Power Purchase Agreement.
The project proponent is the LTWP consortium comprising KP&P Africa B.V and Aldwych International as co-developers, Investment Fund for Developing Countries, Vestas Eastern Africa Limited, Finnish Fund for Industrial Cooperation Ltd, KLP Norfund Investments AS and Sandpiper.
LTWP is financed by a consortium of senior and subordinated lenders specifically:
The entire plant comprises 365 wind turbine generators (WTGs), 365 step-up transformers 0.69/33 kV per Unit, a 33kV collecting grid, a sectionalized 33kV substation, step up block transformers 33/220(400) /30kV including the Dynamic Reactive Power Compensation Systems and all miscellaneous equipment, infrastructure and control and a SCADA System in place and fully installed.
Wind farms around the world operate at different capacity factors depending on wind speeds. As wind is an intermittent source of energy, capacity factors for most wind farms in the world average between 30%-40% of the farms' total installed capacity. Since LTWP began injecting power into the national grid on 24 September 2018, the wind farm has averaged capacity factors of above 70%, peaking at 99% at 307MW.
The benefits of the Project are both on micro and macro levels. Between 24 September 2018 and 31March 2019, the wind farm has injected 737,683,544 kWh of clean, reliable, renewable energy into the national grid. This has increased Kenya's spinning reserve capacity and reduced over reliance on diesel-powered electricity sources in drier months.
In this same period, LTWP displaced approximately USD 47 million of expensive fossil fuel imports and this figure is expected to grow to USD 140 million by November 2019.
Source and top image: Lake Turkana Wind Power Project

Boeing's New 777X to Offer Gentex Dimmable Windows
Development of Solar Cell to Be Used for Space Application
Polluted Wastewater in the Forecast? Try a Solar Umbrella
Toyota to Build Prototype City of the Future