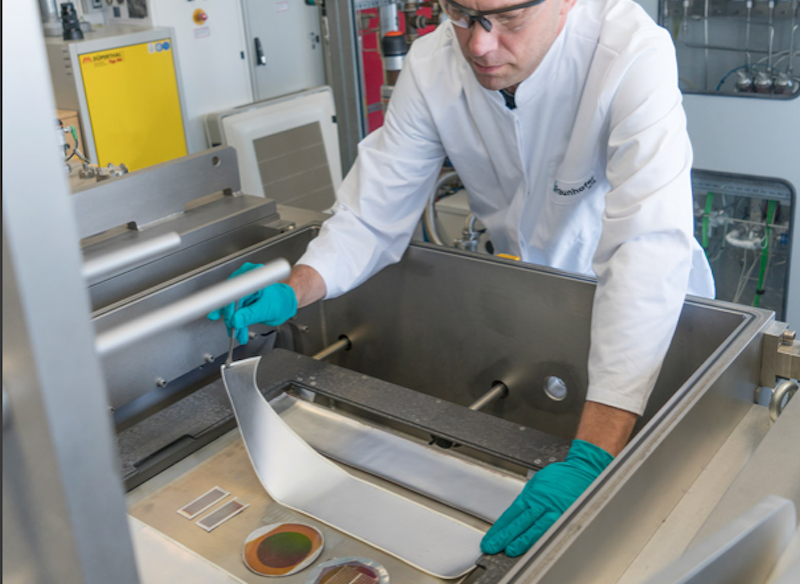 Imagine a truck tarp that can harvest the energy of sunlight. With the help of new textile-based solar cells developed by Fraunhofer researchers, semitrailers could soon be producing the electricity needed to power cooling systems or other onboard equipment. In short, textile-based solar cells could soon be adding a whole new dimension to photovoltaics, complementing the use of conventional silicon-based solar cells. For more information see the IDTechEx report on Energy Harvesting Microwatt to Megawatt 2019-2029.
Solar panels on building roofs are a common enough sight today - as are large-scale solar parks. In the future, we may well see other surfaces being exploited for photovoltaic generation. Truck tarps, for example, could be used to produce the electricity consumed by the driver when underway or parked up for the night, or to power electronic systems used to locate trailers in shipping terminals. Similarly, conventional building facades could be covered with photovoltaic textiles in place of concrete render. Or the blinds used to provide shade in buildings with glass facades could be used to create hundreds of square meters of additional surface for producing power.
Glass-fiber fabric as a solar-cell substrate
At the heart of such visions are pliable, textile-based solar cells developed at the Fraunhofer Institute for Ceramic Technologies and Systems IKTS in collaboration with the Fraunhofer Institute for Electronic Nano Systems ENAS, Sächsisches Textilforschungsinstitut e.V. and industrial partners erfal GmbH & Co. KG, PONGS Technical Textiles GmbH, Paul Rauschert GmbH & Co. KG and GILLES PLANEN GmbH. "There are a number of processes that enable solar cells to be incorporated in coatings applied to textiles," explains Dr. Lars Rebenklau, group manager for system integration and electronic packaging at Fraunhofer IKTS. In other words, the substrate for the solar cells is a woven fabric rather than the glass or silicon conventionally used.
"That might sound easy, but the machines in the textile industry are designed to handle huge rolls of fabric - five or six meters wide and up to 1000 meters in length," explains Dr. Jonas Sundqvist, group manager for thin-film technology at Fraunhofer IKTS. "And during the coating process, the textiles have to withstand temperatures of around 200 °Celsius. Other factors play a key role too: the fabric must meet fire regulations, have a high tensile strength and be cheap to produce. The consortium therefore opted for a glass-fiber fabric, which fulfills all of these specifications," Rebenklau says.
An emphasis on standard processes
Researchers also faced the challenge of how to apply the wafer-thin layers that make up a solar cell - the bottom electrode, the photovoltaic layer and the top electrode - to the fabric. These layers are between one and ten microns in thickness. By comparison, the surface of the fabric is like a mountain range. The solution was first to apply a layer that levels out the peaks and troughs on the surface of the fabric. For this purpose, researchers opted for a standard process from the textile industry: transfer printing, which is also used to rubberize fabrics. All the other processes have been adapted in such a way that they can be easily incorporated in standard production methods used in the textile industry. For example, the two electrodes - which are made of electrically conductive polyester - and the photovoltaic layer are applied by means of the common roll-to-roll method. The solar cells are also laminated with an additional protective layer in order to make them more robust.
Fabric-based solar cells ready for market launch in around five years
The research team has already produced an initial prototype. "This has demonstrated the basic functionality of our textile-based solar cells," Rebenklau says. "Right now, they have an efficiency of between 0.1 and 0.3 percent." In a follow-up project, he and the team are seeking to push this over the five percent mark, at which point the textile-based solar cells would prove commercially viable. Silicon-based solar cells are significantly more efficient, at between ten and 20 percent. However, this new form of solar cell is not intended to replace the conventional type, merely offer a alternative for specific applications. In the coming months, the team will be investigating ways of enhancing the service life of the fabric-based solar cells. If all goes according to plan, the first textile-based solar cells could be ready for commercialization in around five years. This would fulfill the original goal of the PhotoTex project: to provide new stimulus for Germany's textile industry and improve its competitiveness.
Source and top image: Fraunhofer Gesellschaft
Learn more at the next leading event on the topic: Healthcare Sensor Innovations USA 2020

A sustainable and recyclable thermoelectric paper
Internet of Things: Lessons from EAS and RFID
Coronavirus to Particulates: Huge Market Opening Up for TAF
Perovskite solar cells with iridescent colors