Researchers at Cornell University have created an energy harvesting "piezo-tree" based on the fluttering of leaves where synthetic leaves are connected to a piezoelectric stem. The device is able to convert the energy in wind into electric power whilst remaining light, low-cost, and easily scaled.
In the prototype, the flexible plate and film are driven to oscillate just as a flag or leaf might flap in the wind. The flapping motion is attributed to instability of the aero-elastic system. When creating the piezo-tree, researches used the flexible piezoelectric material Polyvinylidene Fluoride (PVDF) as the basic component, as it could withstand unpredictable wind strength. The basic design is to clamp one edge of PVDF element to a cylinder bluff body and leave the other edge free. When the wind crosses this bluff body, it will lead to a vortex shedding and the periodic pressure difference will drive the piezo-leaf to bend in the downstream of the air wake, synchronously. AC signal is collected from the flapping piezo-leaf, which is working on a periodic bending model, and the electrical energy is stored in a capacitor after rectifying it with a full-wave bridge. 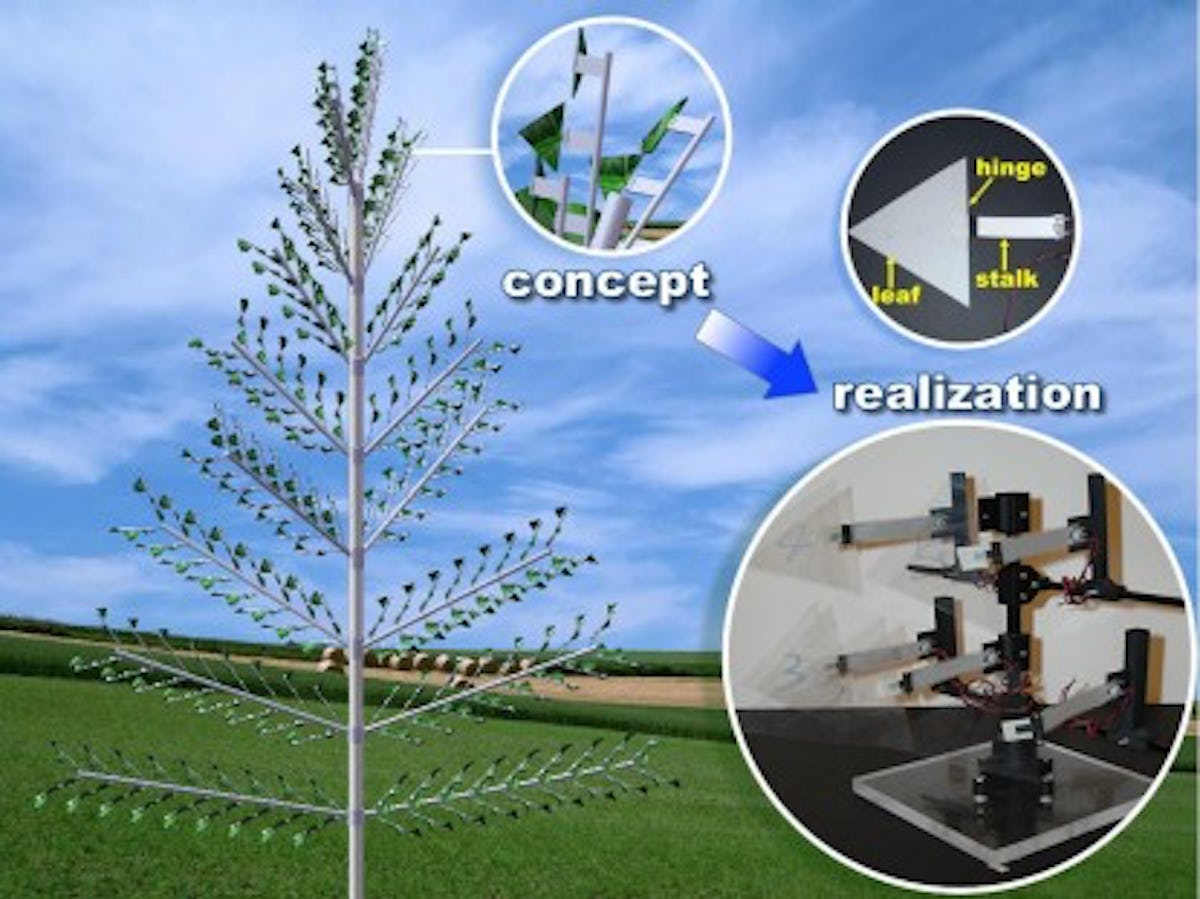 Source: Cornell University
However, because of the weak piezoelectric strain coefficient of PVDF, the preliminary Piezo-Leaf Generator's power level was just about 100 pW, unable to drive even a common LED. Then, researchers tried to attach a piece of plastic film to the end of the leaf along the direction of air flow, which showed about 100 times increase of power in the same condition. A series of experiments were conducted using attachments of various shape, area, density and flexibility of plastic and polymer film producing different results in the level of power.
Additionally, design optimization studies found that a particular vertical stalk, horizontal leaf arrangement could increase power output by an order of magnitude. This is a massive, ten-fold improvement over current leaf-stalk arrangements. As a simple, robust, and easily scaled device, the "piezo-tree" would serve as an effective and unique power generator in a variety of environments. For practical application the researchers hope to build plant-like devices with hundreds or thousands of piezo-leaves.
Source: Cornell University
Top image source: Cornell University
For more attend: Energy Harvesting & Storage USA 2009
Also read: Energy Harvesting and Storage for Electronic Devices 2009-2019

I would like to point out that the Cornell team was not the first to propose a flapping piezoelectric wind generator. I was the inventor, who developed the idea. After discovering that Cornell was using my idea, which they got from my website, book, and other renewable energy websites, I contacted their department Dean, and he had Dr. Lipson amend his research paper to cite me as the original inventor of the concept. In fact I am now patenting this process. Rick Dickson, Inventor Portland, Oregon

Seriously? who hasn't had this idea. The difference is they actually built something.