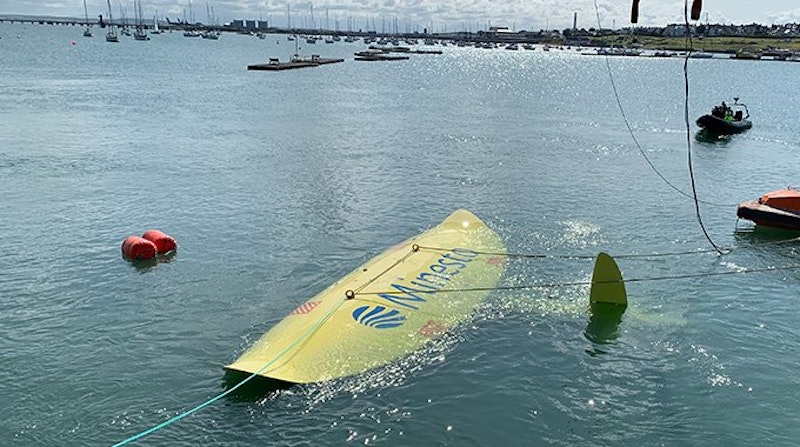 Leading marine energy developer Minesto has resumed testing of its commercial-scale DG500 kite system at the company's Holyhead Deep site off North Wales now that upgraded test site infrastructure installation is complete. After a period of maintenance and upgrade, the microgrid system (MGS) buoy was lifted back into the sea from the quayside in Holyhead, towed to site and successfully reconnected to its pre-laid moorings. The MGS buoy, used for the first installation in Wales, handles and analyses generated electricity while also providing data communications with Minesto's marine energy converter DG500. For more information see the IDTechEx report on Energy Harvesting Microwatt to Megawatt 2019-2029.
"We are very pleased to be back in the water with the DG500 kite system, and we are looking forward to the continued testing operations. The team has made a great effort in upgrading the systems over winter and has executed the installation activities in an efficient and safe manner," said Minesto's Chief Operating Officer David Collier.
Following the recent re-installation of some of the offshore site infrastructure in the Holyhead Deep, the DG500 kite system was towed to site where the kite was re-connected to the seabed foundation. The operations this year build on last year's commissioning program, especially looking at long-term operations. This will be used for optimisation and cost reduction of Minesto's unique Deep Green technology.
Bernt Erik Westre, Chief Technology Officer at Minesto commented: "It was great to see the upgraded DG500 start up and fly right away, as the current system is different from last year's version in several key areas. The new method of installing the kite by towing and connecting it to the infrastructure at the foundation rather than on the surface worked really well. By eliminating offshore kite lifts, we have expanded our operational ability and capacity, while lowering the total cost level at the same time."
Minesto's marine energy technology called Deep Green consists of a subsea kite carrying a turbine. The kite flies across the underwater current, significantly enhancing the water flow speed through the turbine. This makes Minesto's product commercially viable in globally extensive sea areas where no other known, verified technologies can operate cost effectively.
Source and top image: Minesto