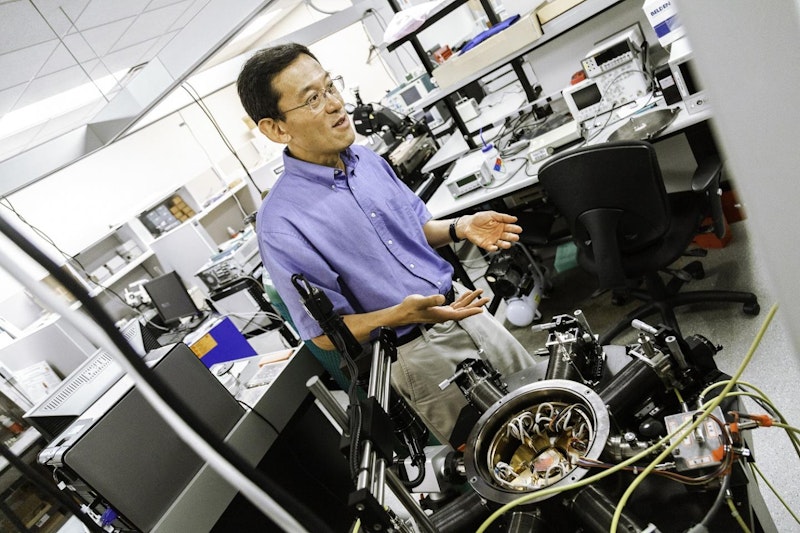 A University of Texas at Dallas physicist has teamed with Texas Instruments Inc. to design a better way for electronics to convert waste heat into reusable energy. The collaborative project demonstrated that silicon's ability to harvest energy from heat can be greatly increased while remaining mass-producible. For more information see the IDTechEx report on Energy Harvesting Microwatt to Megawatt 2019-2029.
Dr. Mark Lee, professor and head of the Department of Physics in the School of Natural Sciences and Mathematics, is the corresponding author of a study published in Nature Electronics that describes the results. The findings could greatly influence how circuits are cooled in electronics, as well as provide a method of powering the sensors used in the growing "internet of things."
"Sensors go everywhere now. They can't be constantly plugged in, so they must consume very little power," Lee said. "Without a reliable light source for photovoltaic energy, you're left needing some kind of battery -- one that shouldn't have to be replaced." Thermoelectric generation is a highly green energy source, converting a difference in temperature into electrical energy.
"In a general sense, waste heat is everywhere: the heat your car engine generates, for example," Lee said. "That heat normally dissipates. If you have a steady temperature difference -- even a small one -- then you can harvest some heat into electricity to run your electronics." Sensors embedded beneath a traffic intersection provide an example of convenient thermoelectric power.
"The heat from tires' friction and from sunlight can be harvested because the material beneath the road is colder," Lee said. "So no one has to dig that up to change a battery." The primary hurdles for widespread thermoelectric harvesting have been efficiency and cost, he said.
"Thermoelectric generation has been expensive, both in terms of cost per device and cost per watt of energy generated," Lee said. "The best materials are fairly exotic -- they're either rare or toxic -- and they aren't easily made compatible with basic semiconductor technology."
Silicon, upon which so much technology relies, is the second-most abundant element in Earth's crust. It has been known since the 1950s to be a poor thermoelectric material in its bulk, crystalline form. But in 2008, new research indicated that silicon performed much better as a nanowire -- a filamentlike shape with two of its three dimensions less than 100 nanometers. For comparison, a sheet of paper is about 100,000 nanometers thick.
"In the decade since those experiments, however, efforts to make a useful silicon thermoelectric generator haven't succeeded," Lee said. One barrier is that the nanowire is too small to be compatible with chip-manufacturing processes. To overcome this, Lee and his team relied on "nanoblades" -- only 80 nanometers thick but more than eight times that in width. While that is still much thinner than a sheet of paper, it's compatible with chip-manufacturing rules. Study co-author Hal Edwards, a TI Fellow at Texas Instruments, designed and supervised fabrication of the prototype devices. He turned to Lee and UT Dallas to further study what the devices could do.
"A deep dive for these novel measurements, detailed analysis and literature comparisons requires a university group," Edwards said. "Professor Lee's analysis identified key metrics in which our low-cost silicon technology competes favorably with more exotic compound semiconductors." Lee explained that the nanoblade shape loses some thermoelectric ability relative to the nanowire. "However, using many at once can generate about as much power as the best exotic materials, with the same area and temperature difference," he said.
The team's circuit-design solution combined an understanding of nanoscale physics with engineering principles. One key realization was that some previous attempts failed because too much material was used. "When you use too much silicon, the temperature differential that feeds the generation drops," Lee said. "Too much waste heat is used, and, as that hot-to-cold margin drops, you can't generate as much thermoelectric power. There is a sweet spot that, with our nanoblades, we're much closer to finding than anyone else. The change in the form of silicon studied changed the game," he added.
Lee said that the advanced silicon-processing technology at Texas Instruments allows for efficient, inexpensive manufacturing of a huge number of the devices. "You can live with a 40% reduction in thermoelectric ability relative to exotic materials because your cost per watt generated plummets," he said. "The marginal cost is a factor of 100 lower."
Gangyi Hu PhD'19, who finished his doctorate in physics at UT Dallas in May, is the study's lead author. He produced the computer modeling to determine the number of nanoblades per unit area that will produce the most energy without reducing the temperature difference. "We optimized the configuration of our devices to place them among the most efficient thermoelectric generators in the world," Hu said. "Because it's silicon, it remains low-cost, easy to install, maintenance-free, long-lasting and potentially biodegradable."
Lee said the work was also novel because they used an automated industrial manufacturing line to fabricate the silicon integrated-circuit thermoelectric generators. "We want to integrate this technology with a microprocessor, with a sensor on the same chip, with an amplifier or radio, and so on. Our work was done in the context of that full set of rules that govern everything that goes into mass-producing chips," Lee said. "Over at Texas Instruments, that's the difference between a technology they can use and one they can't."
Source and top image: University of Texas at Dallas