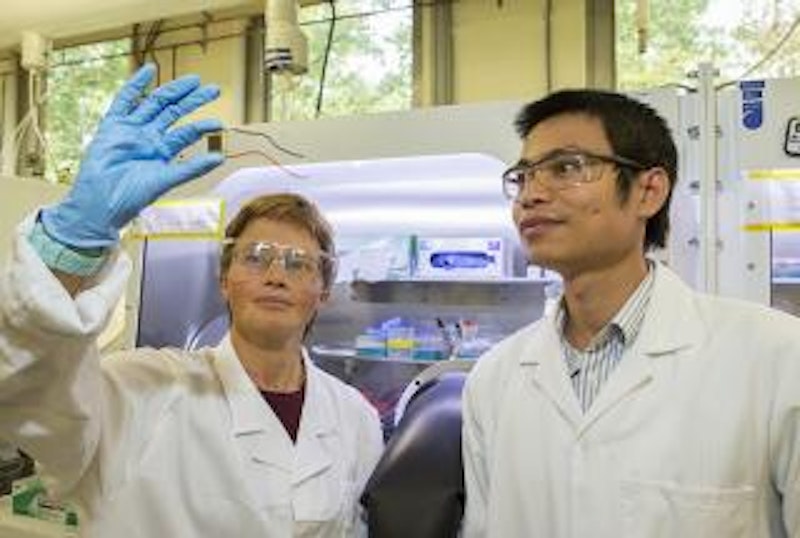 Researchers at The Australian National University (ANU) have achieved a new record efficiency for low-cost semi-transparent perovskite solar cells in a breakthrough that could bring down the cost of generating solar electricity. For more information see the IDTechEx report on Perovskite Photovoltaics 2018-2028.
The team led by The Duong from the ANU Research School of Engineering have achieved 26 per cent efficiency in converting sunlight into energy, which could help make perovskite solar cells a viable alternative to existing silicon cells. Perovskite is a material with a lattice-like structure that can help harvest light. Researchers have achieved 26 per cent efficiency by mechanically combining perovskite with silicon solar cells.
"Until now efficiencies of this kind have only been achieved using high cost materials normally used on satellites," said Mr Duong, a PhD student. "We are now a step closer to a low cost alternative."
Silicon solar cell technology is about 90 per cent of the solar market, but scientists around the world are working to find a way to make them more efficient, affordable, stable and reliable. The research is supported by $3.6 million in funding from the Australian Renewable Energy Agency. Professor Kylie Catchpole from the ANU Research School of Engineering said the advances in solar technology were good news for consumers, although the perovskite cells were not yet ready for use on rooftops.
"This breakthrough opens the way to increasing the efficiency of silicon solar cells further, and in a cheap way," Professor Catchpole said. "The key challenge for now is achieving the same stability as we have with silicon solar cells that can be put out on a roof for 20 years using perovskite./Over the next few years we are planning to increase efficiencies to 30 per cent and beyond."
The research has been published in Advanced Energy Materials.
This work was part of the "High-efficiency silicon/perovskite solar cells" project led by University of New South Wales with research partners ANU, Monash University, Arizona State University, Suntech R&D Australia Pty Ltd and Trina Solar.
Source and top image: Australian National University