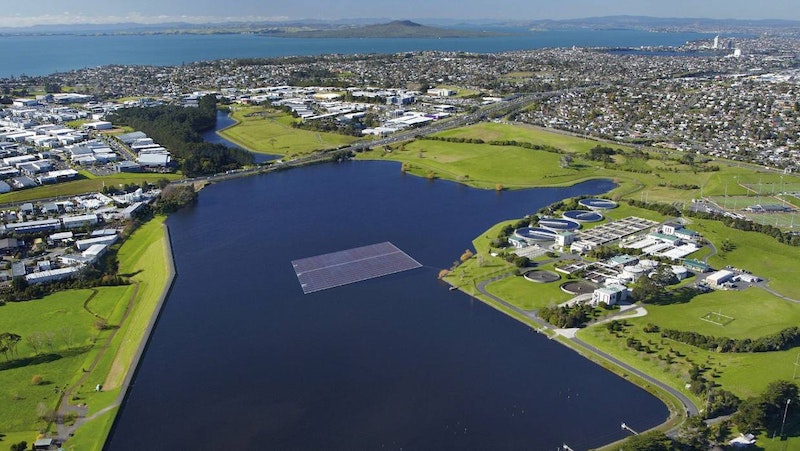 Auckland's electricity and water utility companies today announced a project to build New Zealand's largest solar array in the heart of Auckland's North Shore, by floating it on top of the Rosedale wastewater treatment pond near the Northern Motorway. For more information see the IDTechEx report on Distributed Generation: Minigrid Microgrid Zero Emission 2018-2038.
Vector Group CEO Simon Mackenzie and Watercare chief executive Raveen Jaduram said the system, delivered by Vector PowerSmart, would mark a number of firsts for New Zealand. "It's the first time floating solar will be seen in New Zealand and the first megawatt-scale solar project to be confirmed," said Mr Mackenzie. "It can generate enough power over a year to run the equivalent of 200 average New Zealand homes for a year. Even larger systems are already common overseas and with reports out of Australia of costs as low as 4-5c per kWh, when that scale arrives here we'll see solar's real potential to set a new cap on the wholesale market which over the past few days has been around double that. Vector PowerSmart's capability to design and deliver this innovative system shows how new energy solutions are key to helping business reach their economic and environmental goals, and we're proud to be working with Watercare to help it achieve both."
Watercare chief executive Raveen Jaduram said, "The project is a fantastic example of how utilities can work together for the benefit of their communities. As a large user of energy, it's important that we look at ways of reducing our environmental footprint and becoming more self-sufficient. Innovative solutions like this on top of wastewater ponds are a smart way to reduce operational costs."
The array will be used to supplement electricity from the grid as well as cogeneration from biogas, which is already generated on-site from wastewater treatment. The electricity is used for pumping and aeration for natural bacteria that help break down the waste as part of the treatment process.
Watercare has an ambitious programme to reduce its energy use by 8GWh by 2022 and to achieve energy self-sufficiency at its Mangere and Rosedale wastewater treatment plants by 2025. Solar installations such as this one will help Watercare achieve its targets.
Highlights of New Zealand's first floating solar project:
Source and top image: Vector