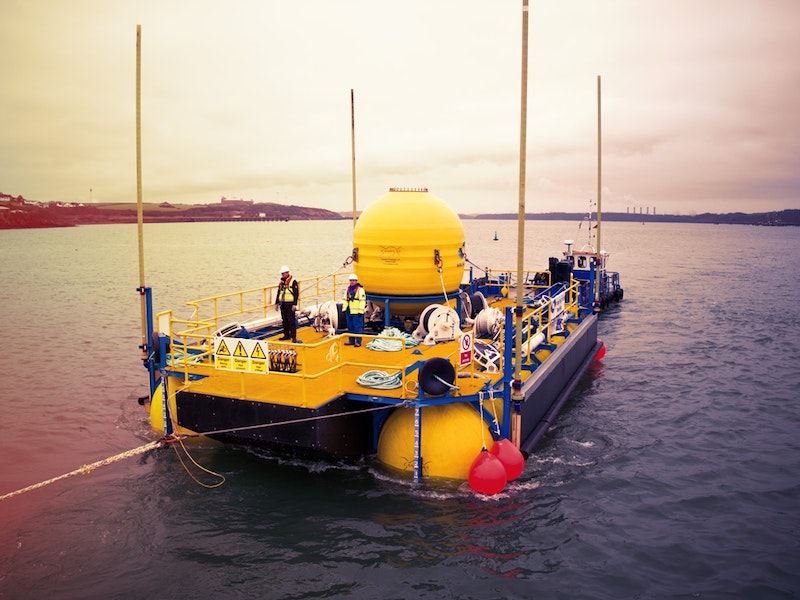 More than £12m of EU funds will be invested in the next stage of a major initiative to generate clean energy from ocean waves, First Minister Mark Drakeford announced today. The funding will support the next stage of Swansea-based Marine Power Systems' project to create and launch an underwater device that can provide clean, affordable and reliable energy in Wales and around the world. For more information see the IDTechEx report on Wave, Tidal and Hydro Power 1W-10MW 2018-2038.
The WaveSub device is the invention of Swansea University graduates Dr Gareth Stockman and Dr Graham Foster who founded Marine Power Systems in 2008. Drawing upon patented technology developed by the company, the device operates under the surface of the sea by capturing the high power density of ocean waves.
Following successful testing of a quarter-scale WaveSub, today's investment will allow the company to develop a full-scale prototype, paving the way for the device to be launched on the market and sold around the world. The Welsh Government has been working with Marine Power Systems for a number of years to support the development of this technology and the WaveSub concept.
Announcing the £12.8m EU funding during a visit to the company, First Minister Mark Drakeford said: "We want Wales to be a leading player in the marine energy sector. This means supporting Welsh developers like Marine Power Systems; continuing to attract developers from around the world to Wales and exporting our knowledge, technology and services globally. WaveSub is a pioneering project and today's investment allows the company to take a major step towards these goals. This is excellent news for the marine energy industry in Wales."
Marine Power Systems' Chief Executive, Dr Gareth Stockman, said: "MPS is honoured to be awarded this £12.8 million EU funding package for its WaveSub wave energy generation device and would like to thank the Welsh Government for its continued, forward thinking, support. Having recently concluded testing on our quarter-scale prototype WaveSub device, this funding is a solid endorsement of the progress that MPS has made with the WaveSub's development. With our talented team of engineers and a network of highly experienced suppliers behind us, MPS is confident it can make great strides as a world leader in the marine energy sector."
Dr Stockman added: "We live in an era in which renewable energy development is rapidly accelerating and - importantly - which the public are now overwhelming in support of. MPS are excited to utilise this £12.8 million of financial support to continue the development of WaveSub to a point of market-readiness, and remain fully committed to supporting the Welsh Government with its ambition to achieve zero carbon emissions by 2050."
The next stage of the WaveSub project will also be funded through a £5.5m investment opportunity, to be raised by MPS over the coming months.
Source and top image: Marine Power Systems