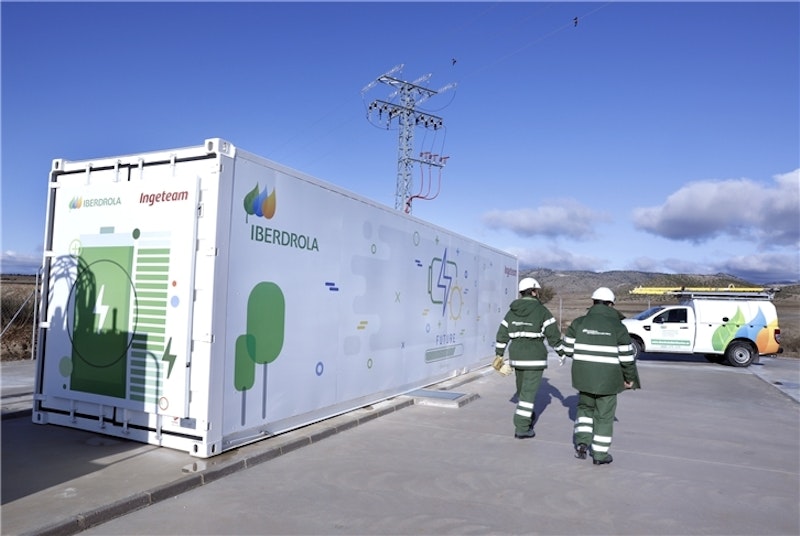 i-DE, Iberdrola's electricity distribution arm, has inaugurated the first electrical energy storage system with lithium-ion batteries for distribution networks in Spain. The project, which is the first in the country, is located in the Murcian municipal district of Caravaca de la Cruz and will improve the quality of the energy supply in the surrounding area, as well as the use of solar energy generated in the area. The storage system, with a capacity of 3 MWh, can operate in isolation and, in the event of an interruption in supply, will be able provide up to five hours of electricity to the main districts in the surrounding area: Cañada de la Cruz, Inazares, Moralejo, Barranda, El Moral and Los Royos. For more information see the IDTechEx report on Batteries for Stationary Energy Storage 2019-2029.
The special circumstances in the rural environment around Caravaca de la Cruz have determined the choice of this enclave for this innovative solution. In recent years, the area has been recording very adverse weather conditions that cause incidents in the distribution network. Also, it is an area consisting of various small and scattered centres of consumption, so a fault can leave several villages without service. To this is added the long distances that have to be covered to reach the source of the problem, which further complicates the resolution of incidents.The traditional solution would have been to construct 22 km of overhead power lines, crossing environmental protection areas. This is the reason why an innovative solution was chosen, based on energy storage installed at a point where overhead cables intersect, allowing several areas to be served with a single battery. The project has shown that batteries can improve the continuity of supply in contingency situations, as well as the use of photovoltaic plants connected to the impacted grid, including in isolation using only renewable energy. The batteries, in short, constitute a complement to the conventional local operation.
There are several large photovoltaic plants in Caravaca de la Cruz that upload electricity to the grid during the hours with the most intense sunlight. A battery with these characteristics is able to adjust the voltage to the appropriate values and be ready to intervene as a second source of power supply in the event of a power failure.To achieve this, it has a smart storage system that is able to assess the situation and decide what part of the network will remain in operation from the battery, taking into account actual consumption at that time, the generation capacity of photovoltaic plants nearby and the state of charge of the battery, among other aspects.The system estimates both the consumption and the potential renewable generation power of the solar plants in the area at that time and for the following hours. It can, thus, take advantage of local power generation and, in addition, absorb excess energy, in case of excess production. The combination of this battery and the electricity produced by the photovoltaic plants in the area will significantly reduce the interruption times in the power supply during an emergency.
Storage systems are key to addressing the challenges of the energy transition and are destined to become an essential element in the electrical system of the future. This is because they allow the quality of the electricity supply to be improved, ensuring the stability and reliability of the network and integrating and harnessing the energy generated by renewable sources.Iberdrola is a leader in energy storage, with an installed pumping technology capacity of 4,400 MW, which is currently the most efficient method. It is also undertaking numerous initiatives that combine the use of batteries with renewable energy - wind and photovoltaic - projects, as well as those oriented towards improving the quality of the supply by its grids, as is the case with the installation in Caravaca de La Cruz.Electricity distribution networks are the circulatory system in the new energy model and an essential platform in the transition toward a decarbonised economy based on competitive, renewable energy. Transforming the grids into smart infrastructure responds to the challenges of an electrified economy, with greater integration of renewables, sustainable mobility, smart cities and consumption models and distributed generation. In this context, i-DE has allocated 2 billion euros to digitising its electricity networks, with the installation of almost 11 million digital meters, together with the infrastructure that supports them, and the adaptation of around 90,000 transformer centres in Spain, to which it has incorporated remote management, supervision and automation capabilities. It is also currently working on the digitalisation of the low voltage network and is investing in control and operation systems.
Source and top image: Iberdrola
Learn more at the next leading event on the topic: Energy Storage Innovations USA 2020