Global Tidal Energy Leader Gets go Ahead in Nova Scotia 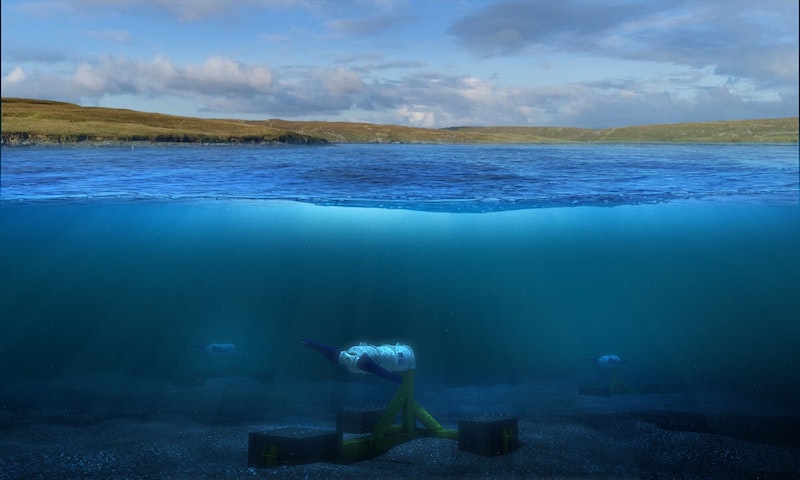 World leading tidal energy company Nova Innovation has landed its largest project, which is set to deliver enough energy to power 600 homes. As the world-wide race heats up to capture the potentially huge global tidal energy industry, Nova Innovation has expanded into North America and expects to start work within months. For more information see the IDTechEx report on Wave, Tidal and Hydro Power 1W-10MW 2018-2038.
Nova has received a permit to develop a 1.5MW tidal array in Petit Passage, in the Bay of Fundy area of Nova Scotia. A phased approach starting with a single turbine in 2020, then three phases of 0.5MW will eventually see 15 new tidal stream turbines installed by 2023 on the seabed to generate clean electricity from the natural ebb and flow of the tide - enough to power 600 homes.
Simon Forrest, Chief Executive of Nova Innovation, said: "In the face of the climate emergency, we are on a mission to transform the power of the oceans across the world into clean, predicable energy. At five times the size of our array in Shetland, which is the first of its kind in the world, this project is a massive step forward for Nova Innovation and the sector - propelling Nova Scotia to a leading position in tidal energy. We are delighted to have won the contract. It is testimony to the quality of our team in Canada; the relationships we have built with communities, supply chain and government; and the hard work put in by all, that this project will now become a reality. Canada, particularly Nova Scotia, is blessed with an abundant tidal resource and it is inspiring to see the political drive, locally and nationally, to make Nova Scotia the global leader in the sector. The momentum building behind tidal energy is demonstrated by the astonishing response to Nova Innovation's ongoing crowdfunding campaign, which has so far seen more than 1,000 people invest to join our mission."
The Nova Scotian government is putting its weight behind tidal power, pledging to pay Nova Innovation 50 cents per kilowatt hour of electricity from the 15 new turbines, recognizing the costs of developing a ground-breaking new energy technology. This long-term approach will enable Canada to become the global hub of the sector, establish a highly skilled supply chain, help regenerate coastal communities and capitalise on the high-quality jobs being created by the industry.
Derek Mombourquette, Nova Scotia Energy and Mines Minister said: "Nova Scotia's leadership in the development of clean, renewable tidal energy continues to attract new businesses and new investment to our shores. These projects are growing our green economy, creating jobs in rural areas of the province and they have tremendous potential to help in our fight against climate change."
A similar story unfolded when wind power was in its infancy in the 1980s and 90s. The UK and US were early pioneers of wind turbine technology, but it was countries like Denmark who ultimately prospered to the tune of many billions of dollars through significant governmental backing at the crucial early commercial stage. Canada looks set to emulate Denmark in the tidal sector.
As well as helping to save the environment, the global push to decarbonize presents a huge economic opportunity for tidal energy.
Source and top image: Nova Innovation