Inspired by membranes in the body tissues of living organisms, scientists have combined aramid nanofibers used in Kevlar with boron nitride to construct a membrane for harvesting ocean energy that is both strong like bone and suited for ion transport like cartilage. The research, published in the journal Joule, overcomes major design challenges for technologies that harness osmotic energy (pressure and salinity gradient differences between freshwater and ocean water) to generate an eco-friendly and widely available form of renewable energy. For more information see the IDTechEx report on Wave, Tidal and Hydro Power 1W-10MW 2018-2038.
Osmotic energy generators vary less from one day to the next than solar and wind energy farms, making them more reliable than these green energy staples. However, the clay, graphene oxide, MXene, and molybdenum disulfide nanomaterials commonly used in membranes tend to collapse and disintegrate in water.
While nanosheets made from boron nitride have recently shown promise, remaining stable as temperatures rise and not easily reacting with other substances, membranes made from boron nitride alone are not hardy enough to withstand water for a long time either, rapidly beginning to leak ions as they develop microscopic cracks.
"New advanced boron nitride composite membranes with novel and robust properties will solve this problem, which is in high demand now," says Weiwei Lei, the lead scientist of this project in Australia, a Senior Research Fellow at Deakin University's Institute for Frontier Materials (IFM).
"Osmotic energy represents an enormous resource for humankind, but its implementation is severely limited by the availability of the high-performance ion-selective membranes," says Nicholas Kotov (@kotov_group), the lead scientist in the US, a professor of engineering at the University of Michigan. 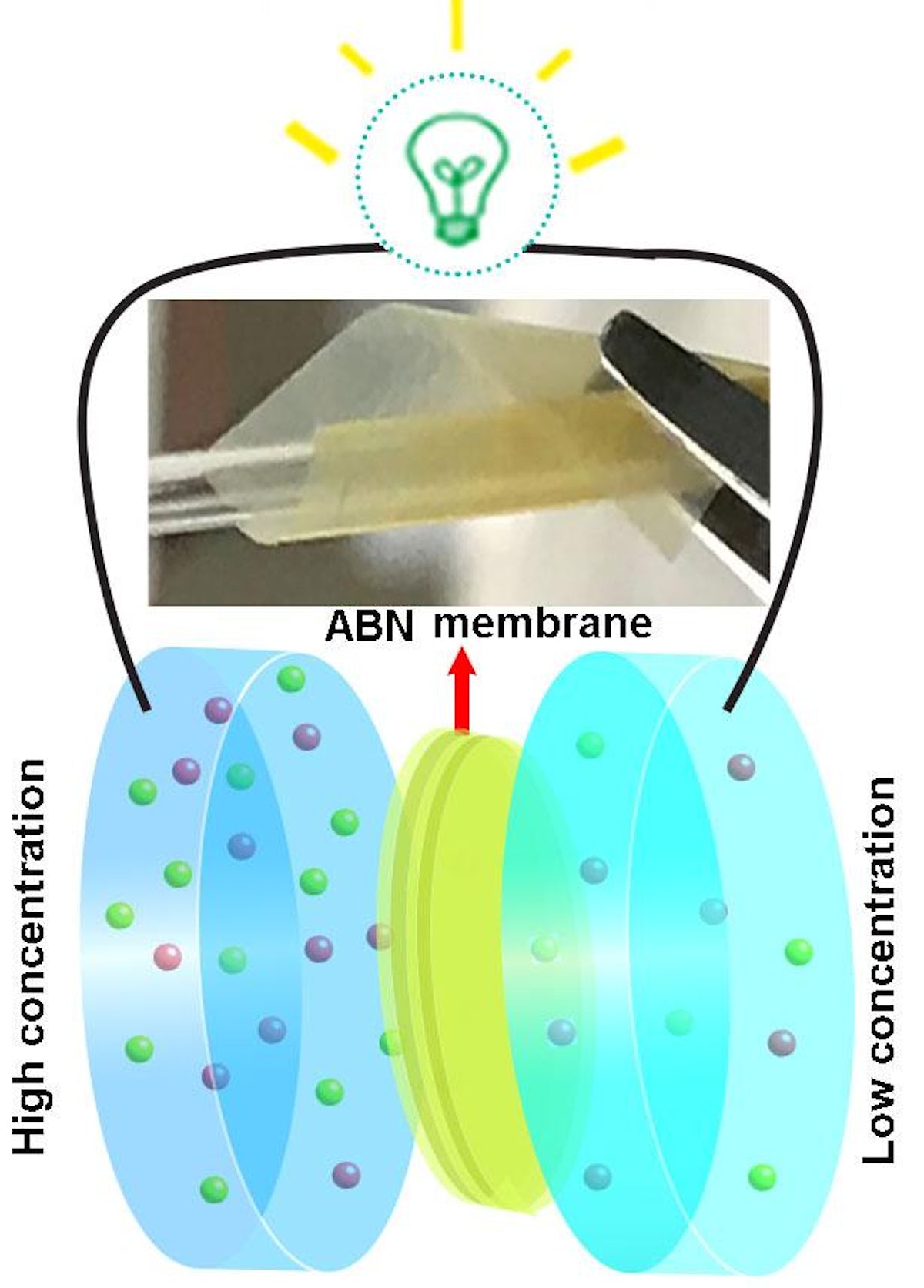 Lei, Kotov, and their colleagues set out to solve this problem by turning to the tissues of living creatures as a blueprint, observing that many different varieties of high-performance ion-selective membranes are needed to facilitate the biological reactions in their bodies. They noted that while soft tissues, such as cartilage, kidney membranes, and basement membranes, allow ions to pass through with ease, they are weak and flimsy. In contrast, bones are exceptionally strong and stiff, but without the benefit of efficient ion transport.
"We found a way to 'marry' these two types of materials to obtain both properties at the same time, using aramid nanofibers that make flexible fibrous materials similar to cartilage and boron nitride that makes platelets similar to bone," Kotov says.
"Our bio-inspired nanocomposite membranes have certain advantages such as high robustness and being easier to fabricate and offering greater multifunctionality than the membranes made of a single material," Lei says.
The researchers constructed the hybrid membrane using layer-by-layer-assembly, a method for recreating layered complex composites that works especially well for water technologies. They applied pressure to one reservoir of the aramid-boron nitride membrane in sodium chloride solution to observe its current and compared it with other nanomaterial membranes, finding that the narrowness of its channels allows it to attract sodium cations and repel chloride anions better than other porous composites. Lei, Kotov, and colleagues also repeatedly rinsed the membrane in sodium chloride for twenty cycles to monitor its stability, finding that it continued to function optimally after 200 hours.
"Our new composite membrane has an adjustable thickness and high stability at temperatures ranging from 0 to 95 degrees Celsius and at a pH of 2.8 to 10.8," Lei says. "Inexpensive components and membrane longevity makes harvesting ocean energy realistic," says Dan Liu, the lead author of the paper, also at Deakin IFM.
Altogether, the researchers concluded that the aramid-boron nitride membrane is well suited to withstand a wide range of conditions they would expect it to encounter while generating osmotic energy. They also believe the technology is highly scalable, especially since both of its components are inexpensive. Aramid nanofibers can even be gathered from discarded Kevlar fabric.
"These are the best performing membranes known so far," says Kotov. However, they are not yet fully optimized. Even better performance can potentially be obtained."
Source: Cell Press
Top image: Pixabay