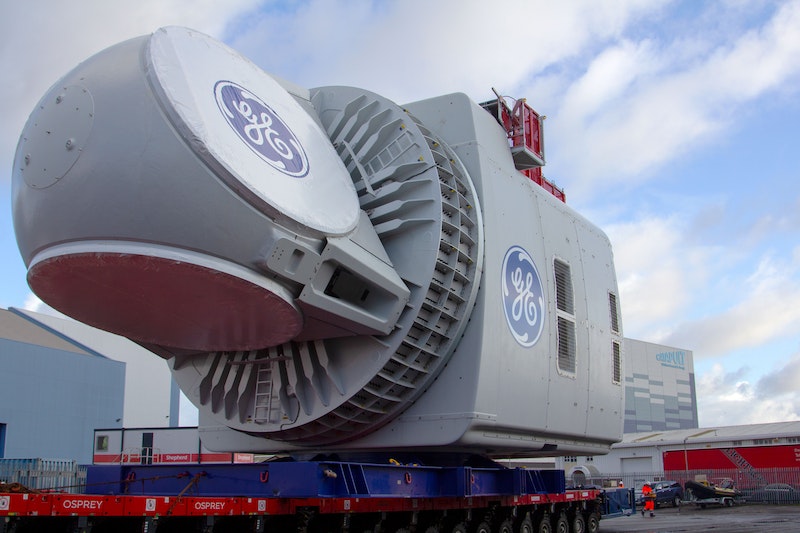 Eneco, Future Wind (a Joint Venture between Pondera Development and SIF Holding Netherlands), and GE Renewable Energy announced that Eneco will purchase all of the electricity generated by GE's Haliade-X 12 MW prototype. The announcement was made during a ceremony to inaugurate the prototype that was recently installed at the port of Maasvlakte-Rotterdam in the Netherlands. For more information see the IDTechEx report on Energy Harvesting Microwatt to Megawatt 2019-2029.
The prototype set a new world record this past weekend by being the first wind turbine ever to generate 262 MWh of clean energy in 24 hours, enough energy to power 30,000 households in the region. Over the next five-year period, the Haliade-X prototype will undergo a series of tests to validate the turbine's power curve, loads, grid performance and reliability. The tests will also allow GE to validate operational procedures for installation and services teams and obtain a Type Certificate for the Haliade-X in 2020, keeping GE on track to commercialize the turbine by 2021.
Frans van de Noort, COO of Eneco said: "We are very proud of our cooperation with Future Wind and GE Renewable Energy, as it enables Eneco to purchase the green power produced by the Haliade-X prototype and to get hands on experience with this innovative and powerful new turbine that represents the future of offshore wind energy."
Diederik de Bruin, Project Manager at Future Wind said: "We are glad to be able to collaborate with GE Renewable Energy and having the world's first 12 MW wind turbine installed at our SiF site in Rotterdam. We believe this milestone is relevant not only for the global offshore wind industry, but also proves how Dutch companies (such as SiF and Pondera) are engaged with the development of renewable energy."
John Lavelle, CEO of Offshore Wind at GE Renewable Energy, said "Along with the industry's compelling value proposition, technology innovation is a key driver of the offshore wind market. Because it is the most powerful machine in the industry, the Haliade-X allows our customers to drive down the cost of wind energy and speed the adoption of clean, renewable energy. The testing that the prototype will undergo is one part of a multi-faceted testing process that will enable us to commercialize the Haliade-X by 2021, just in time for the strong growth uptick we are seeing in offshore wind worldwide."
The Haliade-X technology has been selected already as the preferred wind turbine for 4,800 MW of power in several offshore windfarms: the 120 MW Skip Jack and 1,100 MW Ocean Wind projects in the US, and the 3,600 MW Dogger Bank project in the UK. Serial production of the Haliade-X 12 MW will start at the second half of 2021.
The Haliade-X program is part of a multi-million dollar investment that will contribute to reducing the levelized cost of electricity (LCOE) by making offshore wind a more competitive source of renewable energy. One Haliade-X 12 MW turbine can generate up to 67 GWh of gross annual energy production, providing enough clean energy to power 16,000 European households and save up to 42,000 metric tons of CO2, which is the equivalent of the emissions generated by 9,000 vehicles in one year.
The global offshore wind market is projected to grow from just over 20 GW today to 190 GW by 2030 according the Global Wind Energy Council, and the International Energy Agency has projected that the total investment in offshore wind could top $1 trillion by 2040.
Source and top image: GE Renewable Energy