On the 15th December at the Copenhagen Conference on Climate Change, MIT researchers introduced the Copenhagen Wheel — a revolutionary new bicycle wheel that not only boosts power, but can keep track of friends, fitness, smog and traffic.
"Over the past few years we have seen a kind of biking renaissance, which started in Copenhagen and has spread from Paris to Barcelona to Montreal," says Carlo Ratti, director of the MIT SENSEable City Laboratory and the Copenhagen Wheel project. "It's sort of like 'Biking 2.0' — whereby cheap electronics allow us to augment bikes and convert them into a more flexible, on-demand system."
The first goal of the Copenhagen Wheel project is to promote cycling by extending the range of distance people can cover and by making the whole riding experience smoother so that even steep inclines are no longer a barrier to comfortable cycling. Toward this end, the Wheel can store energy every time the rider puts on the brakes, and then give that power back to provide a boost when riding uphill or to add a burst of speed in traffic.
"The Wheel uses a technology similar to the KERS (Kinetic Energy Recovery System), which has radically changed Formula One racing over the past couple of years," says Ratti. "When you brake, your kinetic energy is recuperated by an electric motor and then stored by batteries within the wheel, so that you can have it back to you when you need it. The bike wheel contains all you need so that no sensors or additional electronics need to be added to the frame and an existing bike can be retrofitted with the blink of an eye." 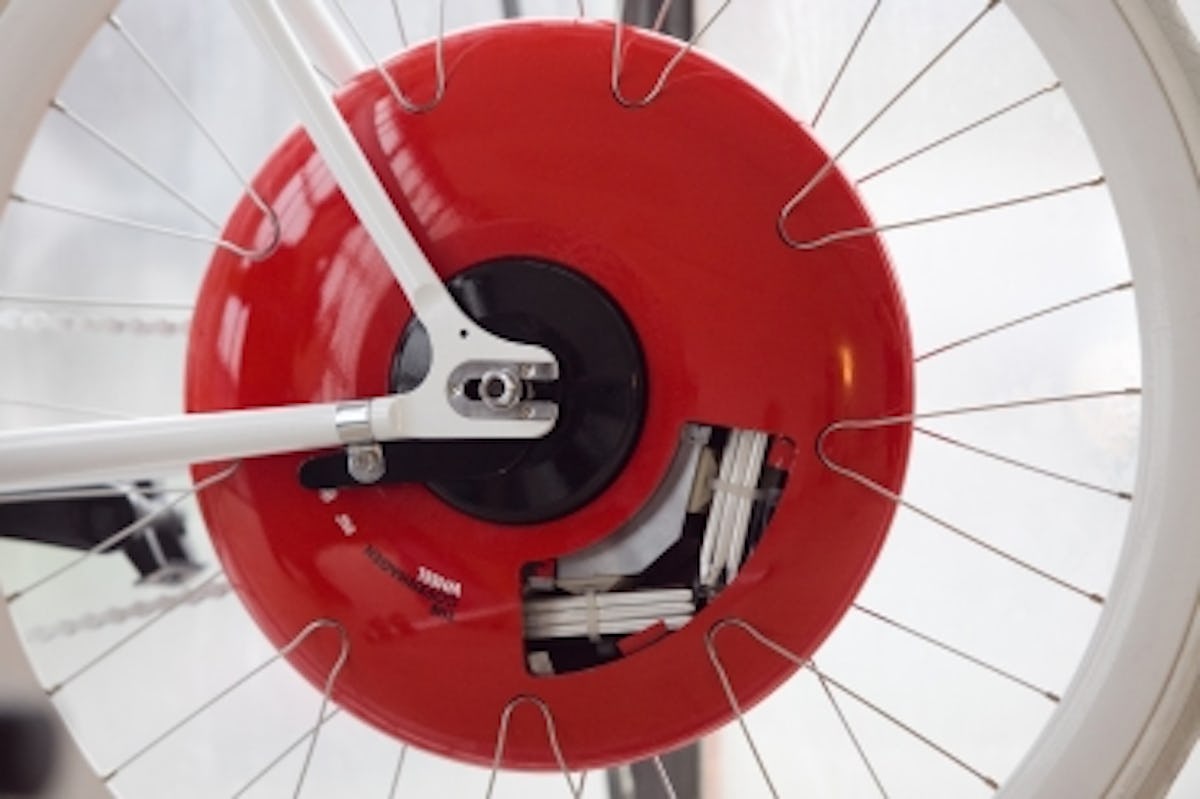 The Copenhagen Wheel, source SENSEable City Lab
"Our city's ambition is that 50 percent of the citizens will take their bike to work or school every day," says Ritt Bjerregaard, Lord Mayor of Copenhagen. "So for us, this project is part of the answer to how can we make using a bike even more attractive."
But there are also a variety of extra functions hidden within the hub of the Copenhagen Wheel. By using a series of sensors and a Bluetooth connection to the user's iPhone, which can be mounted on the handlebars, the wheel can monitor the bicycle's speed, direction and distance traveled, as well as collect data on air pollution and even the proximity of the rider's friends.
"One of the applications that we have discussed with the City of Copenhagen is that of an incentive scheme whereby citizens collect Green Miles — something similar to frequent flyer miles, but good for the environment," says Christine Outram, who led the team of MIT researchers.
The project also aims to create a platform for individual behavioral change. "The Copenhagen Wheel is part of a more general trend: that of inserting intelligence in our everyday objects and of creating a smart support infrastructure around ourselves for everyday life," says Assaf Biderman, associate director of the project. "For example, the Wheel has a smart lock: if somebody tries to steal it, it goes into a mode where the brake regenerates the maximum amount of power, and sends you a text message. So in the worst case scenario the thief will have charged your batteries before you get back your bike."
The initial prototypes of the Copenhagen Wheel were developed along with company Ducati Energia and the Italian Ministry of the Environment. It is expected that the wheel will go into production next year, with a tag price competitive with that of a standard electric bike. According to Claus Juhl, CEO of Copenhagen, the city might place the first order and use bicycles retrofitted with the Copenhagen Wheel as a substitution for city employee cars as part of the city's goal to become the world's first carbon-neutral capital by 2025.
Source and top image: MIT
For more read: Energy Harvesting and Storage for Electronic Devices 2009-2019