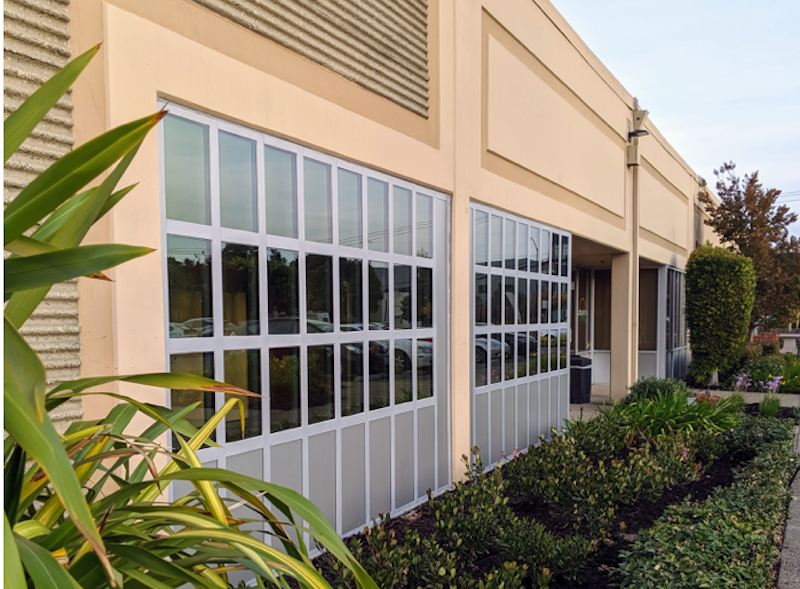 Ubiquitous Energy, a leader in transparent solar technology, has installed the world's first truly transparent solar window façade at its company headquarters in Redwood City, California.
Approximately 100 square feet of transparent solar windows have been installed as an exterior facing window façade replacing the previous single pane windows. This Ubiquitous Energy window façade installation demonstrates the ability to generate clean, renewable energy while maintaining aesthetic beauty, high transparency, and color neutrality. For more information see the IDTechEx report on Smart Glass and Windows 2018-2028: Electronic Shading and Semi-Transparent PV.
Each double pane window has been glazed into a fiberglass frame, matching the existing aesthetic of the building's windows. The windows produce electricity that is being used to power the LED lighting in the adjacent room, while simultaneously maintaining the performance of standard commercial window glass. The façade is also connected to an energy management system that monitors and logs its power generation.
"Not only did we improve the thermal insulation in the conference room by replacing the single pane windows, but also our Ubiquitous Energy windows generate enough electricity to power the lighting in the conference room. We are thrilled with the outcome of this installation and look forward to completing other installation projects in the near future," said Ubiquitous Energy Co-founder and CTO Miles Barr. "I have been looking at BIPV (Building Integrated Photovoltaics) since 1999 and this is the best thing I have ever seen in BIPV," said Scott Thomsen, former Guardian Industries President.
Applied directly on glass using standard glass coating equipment, Ubiquitous Energy's coating is highly transparent and color neutral. The transparent solar coating selectively absorbs and converts non-visible light (ultraviolet and infrared) to electricity while maintaining visible transparency. It also doubles as a low-E and solar control coating in addition to its electricity generation by blocking infrared light that is commonly known as solar heat. The transparent solar coating can be applied to vertical surfaces of buildings turning traditional windows into aesthetically pleasing, highly energy efficient, and electricity generating windows that are desired by architects, designers, and occupants.
Source and top image: Ubiquitous Energy
Learn more at the next leading event on the topic: Printed Electronics Europe 2020