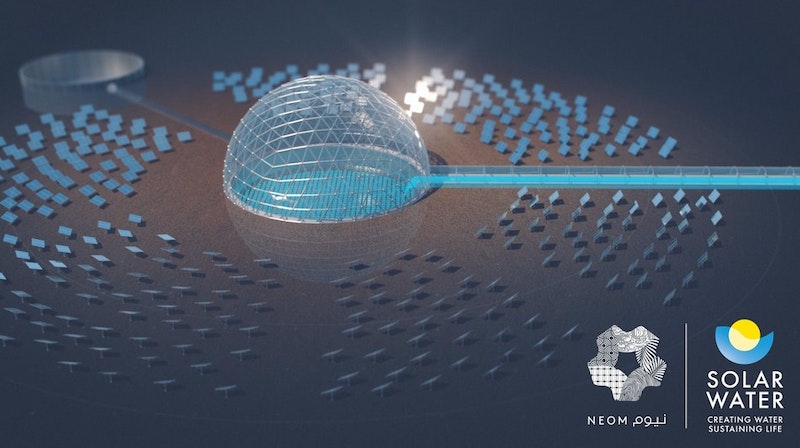 Technology researched at Cranfield University that harnesses concentrated solar power to desalinate sea water is being adopted by a new smart city under construction in Saudi Arabia.
NEOM - a region in northwest Saudi Arabia on the Red Sea being built from the ground up as a living laboratory - has signed an agreement with Solar Water Plc to build the first ever 'solar dome' desalination plant. Solar Water's groundbreaking carbon neutral approach was developed through a Cranfield master's group project and represents the first large-scale use of Concentrating Solar Power (CSP) technology in seawater desalination. For more information see the IDTechEx report on Energy Harvesting Microwatt to Megawatt 2019-2029.
Professor Chris Sansom, Head of the Centre for Renewable Energy Systems at Cranfield, and currently a consultant to Solar Water, said: "Research for this technology began as a group MSc project five years ago and we are delighted to see it now being rolled out at full-scale. The adoption of solar dome desalination in NEOM will be a trailblazer for other countries struggling to generate environmentally-safe and sustainable sources of fresh water. The process could be used to produce clean water for a range of uses including farming, reforestation, biotech consumption, or use by high-tech industries that rely on pure clean water for their manufacturing."
Commenting on the project, H.E. Abdulrahman Al-Fadli, Saudi Arabia's Minister of Environment, Water and Agriculture, said: "NEOM's adoption of this pilot supports Saudi Arabia's sustainability goals, as outlined in the country's National Water Strategy 2030, and is fully aligned with the sustainable development goals set out by the United Nations."
The Solar Water process involves seawater being pumped into a hydrological 'solar dome' made from glass and steel, before it is heated, evaporated and eventually precipitated as fresh water. The technology also reduces the total amount of brine that is created during the water extraction process and prevents any damage to marine life as no brine is discharged into the sea. The heat that accelerates the evaporation of the seawater is harvested from a concentrating solar thermal field of mirrors next to the desalination dome.
David Reavley, CEO of Solar Water Plc, said: "Currently, thousands of desalination plants around the world are heavily reliant on burning fossil fuels to extract water, poisoning our oceans in the process with excess brine. Our game-changing desalination technology is 100% carbon neutral and entirely sustainable. In NEOM we have found a partner who has a strong vision of what a New Future looks like in harmony with nature."
Source and top image: Cranfield University