Floating Battery as Clean Energy Source for City and Port 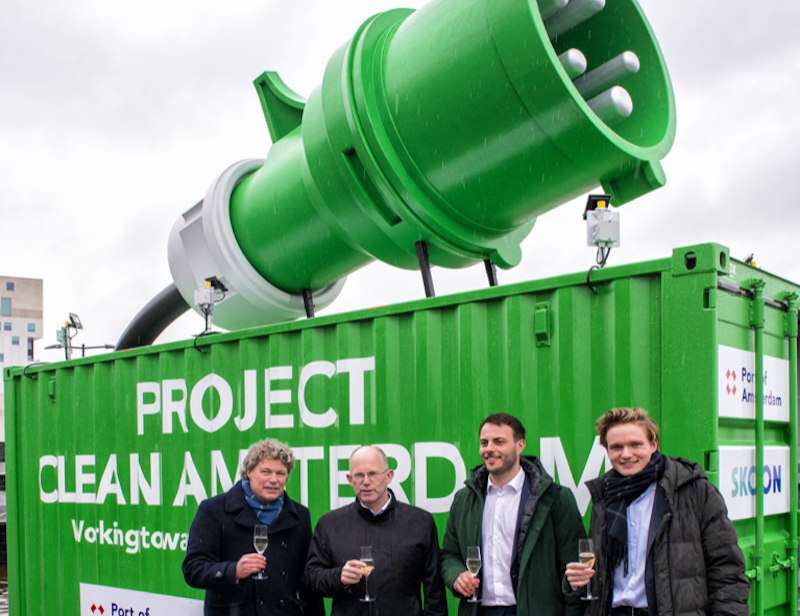 Skoon Energy and Port of Amsterdam start Project Clean Amsterdam, with the launch of a floating battery to provide clean energy to port activities and the city of Amsterdam.
Skoon Energy and the Port of Amsterdam have launched a floating battery service to bring mobile energy storage into the port and inner city of Amsterdam. The battery, which is placed on a barge and powered by local, renewable energy, will help balance the electricity grid. Because it is placed on a barge, the battery can deliver electricity any place close to water. Skoon operates a platform that enables mobile battery sharing to optimize the economics for battery owners and user. This concept of battery sharing facilitates all services for energy users whom are in temporary need of electricity.
In April and May, the number of river cruise docked in Amsterdam is at its peak, due to the prime tulip season. Current grid connections do not provide sufficient capacity to meet the vessels' power demand. Consequently, some of them run diesel generators to generate power whilst moored. This leads to noise pollution and harmful emissions in the centre of Amsterdam. The floating battery is silent and supplies green energy. The battery will be charged from renewable energy sources, such as Windpark Ruigoord, solar panels from rooftops in the port area and energy from biomass by waste-to-energy company AEB. For further information see the IDTechEx report on Diesel Generator Set Future Developments and Alternative Technologies 2019-2029.
Koen Overtoom, CEO at Port of Amsterdam: "We have started this project with Skoon, as it is in line with our ambition of creating partnerships that will help us become a zero emission Port. Together with Skoon and Zoev City, the floating battery will also be deployed in the city centre of Amsterdam, when it is not needed for to deliver power to river cruise vessels at berth."
Peter Paul van Voorst tot Voorst, Founder of Skoon: "The use cases for mobile batteries are endless. Think about construction or maintenance activities on quays or bridges in the canals of Amsterdam, for example. Batteries provide a clean alternative to diesel generators. Additional benefits of the floating battery include transport by an electrically powered barge to the customer. This reduces noise pollution, emissions and traffic on the already busy streets. Also, the barge will not take up any parking space. This makes it a faster, smarter and cleaner solution."
Skoon is backed by clean energy conglomerate Koolen Industries, which also owns Super B, the company supplying lithium batteries to the barges as well as to tourist boats in Amsterdam, and Smart Grid, which supplies the battery system. Kees Koolen, CEO, Koolen Industries: "Amsterdam is admired for its pioneering clean energy initiatives. The canal boats are being converted from diesel to electric power, and the charging infrastructure for electric vehicles is expanding rapidly. This idea to transport mobile batteries by barges is a neat addition to this city's clean energy system."
The floating battery will be on the barge for six months. It will support river cruise vessels two weeks per month. During the other two weeks, the battery will be utilised by various projects in the city of Amsterdam, such as construction projects, film sets or events that often need temporary energy sources and traditionally rely on diesel generators. With a growing network of large batteries and reliable grid connections, the step to turn to a zero emission solution is even simpler. Zoev City is the partner involved in transporting the battery through the canals, with its full electric vessels. The Port of Amsterdam will host a demonstration container near its headquarters, to inform people about Project Clean Amsterdam and its role in the electrification of the industry and larger Amsterdam area, based on renewable sources.
Source and top image: Skoon Energy