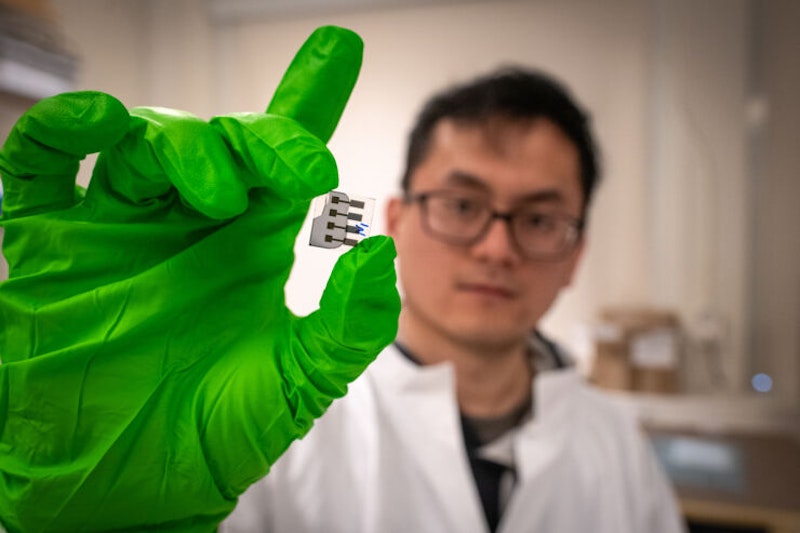 Researchers at Linköping University have discovered a quantum phenomenon that influences the formation of free charges in organic solar cells. "If we can properly understand what's going on, we can increase the efficiency," says Olle Inganäs, professor emeritus.
Doctoral student Qingzhen Bian obtained unexpected results when he set up an experiment to optimise a solar cell material consisting of two light-absorbing polymers and an acceptor material. Olle Inganäs, professor emeritus in the Division of Biomolecular and Organic Electronics asked him to repeat the experiment to eliminate the possibility of measurement errors. Time after time, and in experiments carried out both at LiU and by colleagues in Lund, the same thing happened: a tiny periodic waveform lasting a few hundred femtoseconds appeared in the signature from the optical absorption as a photocurrent formed in the solar cell material. What was going on? For more information see the IDTechEx report on Energy Harvesting Microwatt to Megawatt 2019-2029.
Remarkable waveform
Some background: When light in the form of photons is absorbed in a semi-conducting polymer, an exciton forms. Excitons are bound electrone-hole pairs in the polymer. The electrons are not released, and the transport of charges, the photocurrent, does not arise. When the electron-donating polymer is mixed with a molecule that accepts electrons, the electrons can be released. The electrons then only need to take a small jump to become free, and the loss of energy is kept to a minimum. The holes and the electrons transport the photocurrent and the solar cell starts to produce electricity. This has been well-known for a long time. However, the remarkable waveform then appeared in Qingzhen Bian's experiment.
"The only conceivable explanation is that coherence arises between the excited system and the separated charges. We asked the quantum chemists to look into this and the results we obtain in repeated experiments agree well with their calculations," says Olle Inganäs.
Coherence arises
In the quantum scale, atoms vibrate, and they vibrate faster when they are heated. It is these vibrations that interact with each other in some way and with the excited system of electrons: the phases of the waves follow each other and a state of coherence arises.
"The coherence helps to create the charges that give the photocurrent, which takes place at room temperature. But we don't know why or how yet," says Olle Inganäs.
The same quantum coherence is found in the biological world. "An intense debate is ongoing among biophysics researchers whether systems that use photosynthesis have learnt to exploit coherence or not. I find it unlikely that millions of years of evolution have not resulted in the natural world exploiting the phenomenon" says Olle Inganäs.
"If we understood better how the charge carriers are formed and how the process is controlled, we should be able to use it to increase the efficiency of organic solar cells. The vibrations depend on the structure of the molecule, and if we can design molecules that contribute to increasing the photocurrent, we can also use the phenomenon to our advantage," he says.
Source and top image: Linkoping University

How Chlorine Stabilizes Next-Gen Solar Cells
US Solar Energy to Generate More Power in 2035 Than All Homes Use Now
21.4% Record Efficiency for Flexible Solar Cells
First Railway Station Upgrade in Europe to Use Photovoltaic Film