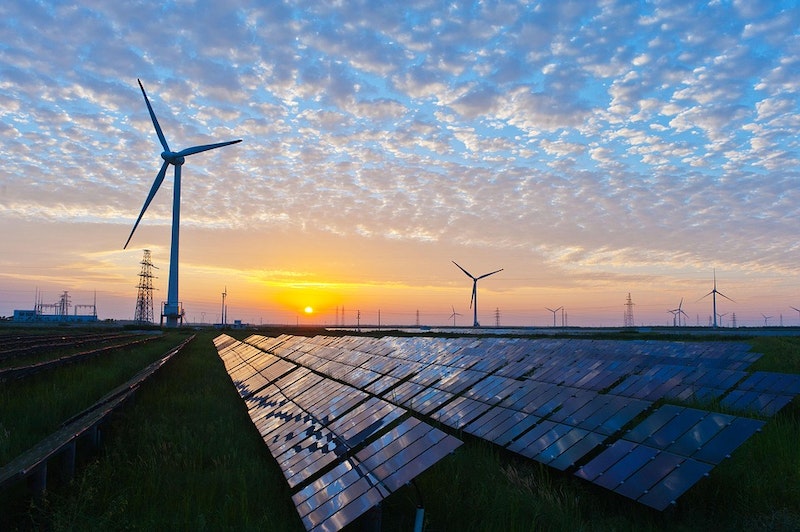 University of Southern California scientists have developed a new battery that could solve the electricity storage problem constraining widespread use of renewable energy. The technology is a new spin on a known design that stores electricity in solutions, sorts the electrons and releases power when it's needed. So-called redox flow batteries have been around awhile, but the USC researchers have built a better version based on low-cost and readily available materials. For further information see the IDTechEx report on Redox Flow Batteries 2020-2030: Forecasts, Challenges, Opportunities.
"We have demonstrated an inexpensive, long-life, safe and eco-friendly flow battery attractive for storing the energy from solar and wind energy systems at a mass-scale," said chemistry professor Sri Narayan, lead author for the study and co-director of the Loker Hydrocarbon Research Institute at USC. The study was published today in the Journal of the Electrochemical Society.
Energy storage is a big hurdle for renewable power because power demand doesn't always coincide when wind turbines spin or sunshine hits solar panels. The search for a viable storage solution faces multiple challenges, which is the problem the USC scientists sought to solve. They focused on the redox flow battery because it's proven technology and has been deployed in limited applications so far. It uses fluids to store electrochemical energy, sorting electrons and recombining by reduction and oxidation, and releasing them to make electricity when its needed.
The key innovation achieved by the USC scientists involves using different fluids: an iron sulfate solution and a type of acid. Iron sulfate is a waste product of the mining industry; it is plentiful and inexpensive. Anthraquinone disulfonic acid (AQDS) is an organic material, already used in some redox flow batteries for its stability, solubility and energy storage potential. While the two compounds are well known individually, it's the first time they've been combined to prove potential for large-scale energy storage. Tests at the USC lab proved the battery has big advantages over competitors.
For example, iron sulfate is cheap and abundant - a dime buys about 2.2 pounds - while large scale manufacturing of AQDS would cost about $1.60 per pound. At those prices, material costs for the type of battery developed by the USC scientists would cost $66 per kilowatt hour; if manufactured at scale, electricity would cost less than half the energy derived from the redox batteries that use vanadium, which is more expensive and toxic. 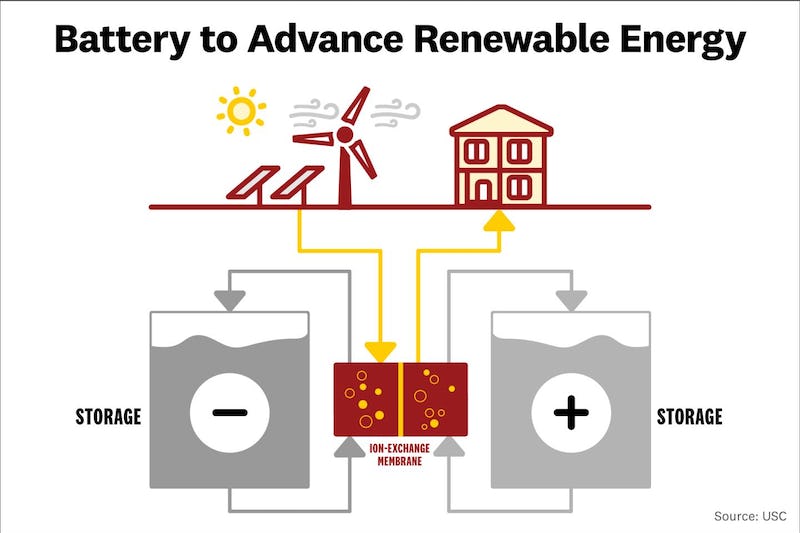 Also, in tests at USC, the researchers found that the iron-AQDS battery can cycle, or recharge, hundreds of times with virtually no loss of power, unlike competing technologies. Durability for energy storage systems is important for large-scale use.
"The materials developed are highly sustainable," said Surya Prakash, co-author of the study and director of the Loker Institute, who collaborates with Narayan in developing new organic quinones. "AQDS can be manufactured from any carbon-based feedstocks, including carbon dioxide. Iron is an earth-abundant, non-toxic element."
The technology also has advantages over lithium ion battery storage. The proliferation of consumer electronics and electric vehicles, powered by lithium ion batteries, creates scarcity for the element, which drives up costs. In turn, those economics make other, less expensive energy storage options more appealing, the study says. Also, lithium ion batteries don't last as long, due to recharging, as most anyone who's recharged cellphones and laptops know. "... The iron-AQDS flow battery system presents a good prospect for simultaneously meeting the demanding requirements of cost, durability and scalability for large-scale energy storage," the study says.
Renewable energy use is growing, yet is constrained due to energy storage limitations. Storing just 20% of today's solar and wind energy requires reserve capacity of 700 gigawatt hours. One gigawatt hour is enough electricity for about 700,000 homes for an hour.
Said Narayan: "To date there has been no economically viable, eco-friendly solution to energy storage that can last for 25 years. Lithium-ion batteries do not have the long-life and vanadium-based batteries uses expensive, relatively toxic materials limiting large-scale use. Our system is the answer to this challenge. We foresee these batteries used in residential, commercial and industrial buildings to capture renewable energy."
Source: University of Southern California
Top image: Pixabay