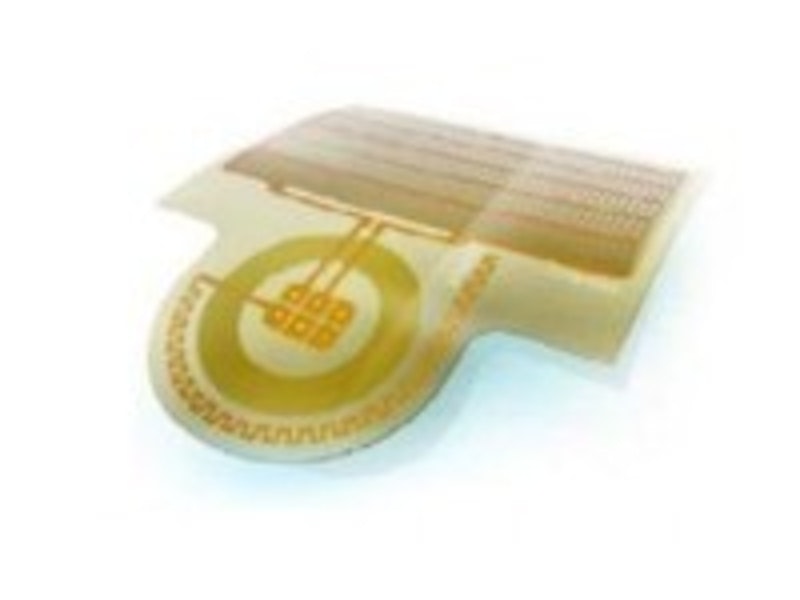 There is a new energy harvesting project that IDTechEx believes could lead to a basic hardware platform for the new printed flexible electronics, incorporated in many products in most applicational sectors from military to consumer packaged goods. In the European FACESS project, a flexible autonomous cost efficient energy source and storage device (shown above) will be developed. The effort of the FACESS consortium is to create a new technology that is derived from the strengths of European region, to the area of low cost power source manufacturing and its utilization in different applications.
The FACESS device consists of an organic solar cell (OSC) module, which is used to harvest solar energy to a thin film battery (TFB) module. Both modules will be manufactured using cost efficient roll-to-roll (R2R) production technologies like printing and coating. In order to maximize the energy storage from the OSC module to the TFB module a control transistor circuitry implemented on thinned silicon chip will be interconnected to the foil. The technological goal for the OSC module is to manufacture using R2R production technologies 100cm2 size module, which has 2.5% photon conversion efficiency producing 250mW power. That would encompass most energy harvesting requirements. For the TFB module, the goal is to manufacture, using R2R technologies, batteries based on Li-technology, which have 1-3mAh/cm2 capacity and area of 30cm2.
As we await suitable printed transistors, the control transistor circuitry is produced on silicon, which is thinned down to 30μm to make it flexible as well. The chip will be connected to the device backplane by a suitable interconnection technique. This kind of energy source concept has huge potential to be integrated into different low cost large area electronics applications such as posters, wireless keyboards, large-area sensor networks.
The FACESS project consortium consists of Technical Research Centre of Finland, Interuniversity Micro-Electronics Centre (Belgium), Commissariat à l'Energie Atomique (France), Politechnika Warszawska (Poland), Umicore S.A. (Belgium), Coatema Coating Machinery GmbH and Coatema Machinenbau GmbH (Germany), and Suntrica Oy (Finland).
Source: VTT
For more read : Energy Harvesting and Storage for Electronic Devices 2009-2019
and attend Energy Harvesting & Storage Europe and Wireless Sensor Networks & RTLS Summit 2010
Learn more at the next leading event on the topic: Printed Electronics Europe 2020