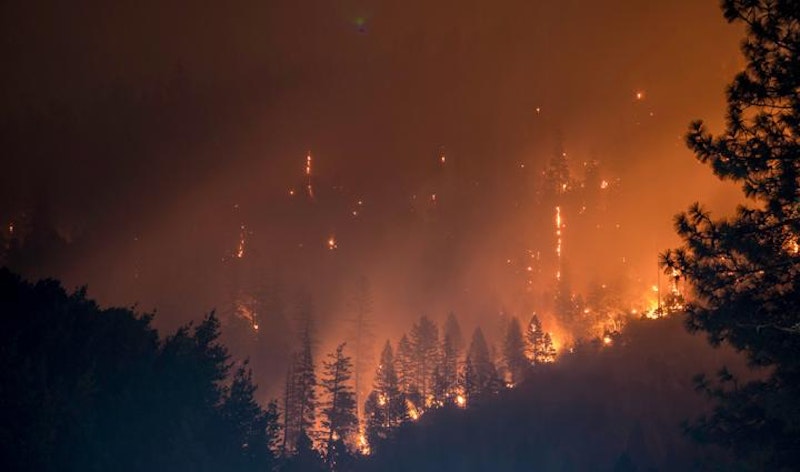 In a new study, a team of Michigan State University scientists designed and fabricated a remote forest fire detection and alarm system powered by nothing but the movement of the trees in the wind. As detailed in the journal Advanced Functional Materials, the device, known as MC-TENG -- short for multilayered cylindrical triboelectric nanogenerator (TENG) -- generates electrical power by harvesting energy from the sporadic movement of the tree branches from which it hangs. For further information see the IDTechEx report on Triboelectric Energy Harvesting and Sensing (TENG) 2020-2040.
"As far as we know, this is the first demonstration of such a novel MC-TENG as a forest fire detection system," said lead author Changyong Cao, who directs the Laboratory of Soft Machines and Electronics in MSU's School of Packaging and is an assistant professor in the Packaging School and Departments of Mechanical Engineering, and Electrical and Computer Engineering. "The self-powered sensing system could continuously monitor the fire and environmental conditions without requiring maintenance after deployment," he said.
For Cao and his team, the tragic forest fires in recent years across the American West, Brazil and Australia were driving forces behind this new technology. Cao believes that early and quick response to forest fires will make the task of extinguishing them easier, significantly reducing the damage and loss of property and life.
Traditional forest fire detection methods include satellite monitoring, ground patrols, watch towers, among others, which have high labor and financial costs in return for low efficiency. Current remote sensor technologies are becoming more common, but primarily rely on battery technology for power.
"Although solar cells have been widely used for portable electronics or self-powered systems, it is challenging to install these in a forest because of the shading or covering of lush foliage," said Yaokun Pang, co-author and postdoc associate at Cao's lab.
TENG technology converts external mechanical energy -- such as the movement of a tree branch -- into electricity by way of the triboelectric effect, a phenomenon where certain materials become electrically charged after they separate from a second material with which they were previously in contact.
The simplest version of the TENG device consists of two cylindrical sleeves of unique material that fit within one another. The core sleeve is anchored from above while the bottom sleeve is free to slide up and down and move side to side, constrained only by an elastic connective band or spring. As the two sleeves move out of sync, the intermittent loss of contact generates electricity. The MC-TENG are equipped with several hierarchical triboelectric layers, increasing the electrical output.
The MC-TENG stores its sporadically generated electrical current in a carbon-nanotube-based micro supercapacitor. The researchers selected this technology for its rapid charge and discharge times, allowing the device to adequately charge with only short but sustained gusts of wind.
"At a very low vibration frequency, the MC-TENG can efficiently generate electricity to charge the attached supercapacitor in less than three minutes," Cao said.
The researchers outfitted the initial prototype with both carbon monoxide (CO) and temperature sensors. The addition of a temperature sensor was intended to reduce the likelihood of a false positive carbon dioxide reading.
Source and top image: Michigan State University