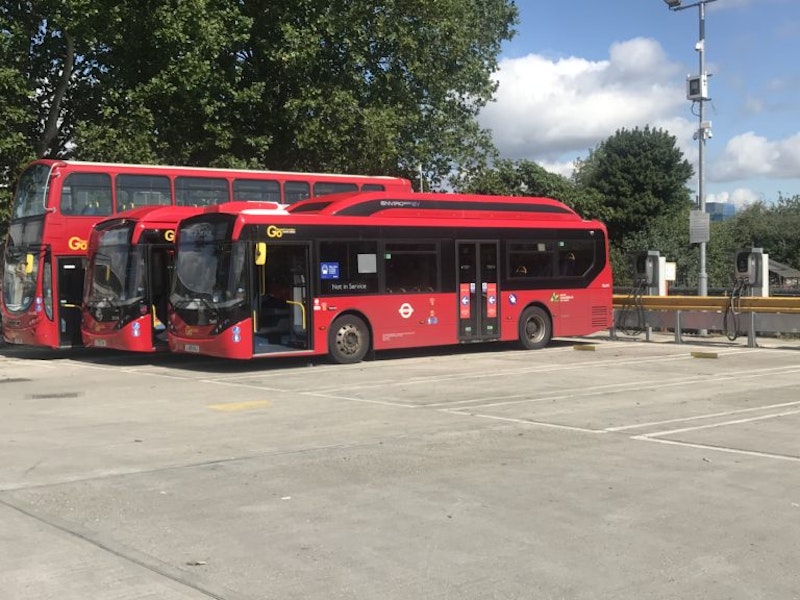 A North London bus garage is set to become a 'virtual power station', generating electricity from buses when not in use. Following a transformation to garage nearly 100 new zero-emission electric buses, Northumberland Park is now one of the biggest electric bus facilities in Europe. The project, called Bus2Grid, is believed to be the world's largest vehicle-to-grid (V2G) trial site.
V2G technology enables energy stored in an electric vehicle's battery to be fed back into the electricity network. By recharging when demand is low and putting energy into the grid when it is high, V2G helps manage the peaks and troughs, balance the network and make it more efficient. If the entire London bus fleet of around 9,000 vehicles were to be converted with the technology being used in the Bus2Grid project, it could theoretically provide enough energy to supply more than 150,000 homes. For further information see the IDTechEx report on Charging Infrastructure for Electric Vehicles 2020-2030.
The Bus2Grid project will be led by SSE Enterprise in partnership with the Mayor of London, Transport for London (TfL) and Go-Ahead London. The initial trial will use the batteries of 28 state-of-the-art double decker buses, capable of returning over 1MW energy to the grid.
Bus2Grid will explore both the commercial value and social benefits to the energy and passenger transportation systems by developing services for the national grid, regional distribution network operators, bus operators and transport authorities. The development and test of the underpinning technology is also an important objective of the trial.
Niall Riddell, Smart Systems Innovation Sector Director for SSE Enterprise, said: "Central to the challenge of decarbonising our transport and achieving climate change targets is how we can optimise the existing flexibility within the energy system. Developing a charging infrastructure that operates in two directions so that batteries can give back as well as take from the grid is an important part of this. SSE Enterprise is proud to have electrified most of the bus garages in London that operate electric buses. Delivering the Bus2Grid project is the next natural step in using smart technology to make bidirectional charging the reality for today's bus users."
Go Ahead London was chosen by TfL to run the first electric buses in London back in 2013. It has now grown its fleet to 240 - making it the largest e-bus operator in Britain.
Dr Stephen Hall from the University of Leeds, one of the project partners, said: "Electrifying transport will have huge benefits for air quality in cities and for meeting our climate change commitments. Large electric vehicles like these can also support the energy system, but this means creating new ways of working between energy utilities, grid managers, and transport providers. This project is creating new business models to make this happen."
Frank Thorpe, Managing Director of BYD UK (Build Your Dreams), said: "This is a significant step for the BYD ADL Partnership, already the market leader in electric buses on British roads. Exploiting the potential of electric buses to act as 'mobile power stations' will be critical to the efficient running of the grid once electric vehicles of all types become commonplace."
UK Power Networks forecasts there will be more than 3.6m electric vehicles connected to its network by 2030, an increase of more than 3.5m on the 95,000 vehicles currently in its region, creating significant additional demand on the energy system. The options are either to spend customers' money on building new infrastructure to meet this increasing demand, or to charge in a smarter way to avoid it.
Ian Cameron, Head of Innovation at UK Power Networks, said: "We believe buses have a big part to play in rolling out low emission vehicles. They offer huge opportunities to contribute towards the drive to improve London's air quality. A fleet of bus batteries harnesses large amounts of electricity and they are habitual, with regular and predictable routes, driving patterns and timings. That means we can easily predict and plan for how we can use any spare electrical capacity they can offer. For example, we could use them as energy storage devices that could add capacity and help us to increase the volume of renewable energy exported onto the network when supply might otherwise be exceeding demand."
The three-year trial is funded by the Department for Business, Energy and Industrial Strategy (BEIS) and the Office for Low Emission Vehicles (OLEV) with the support of Innovate UK. The Bus2Grid project is being led by SSE Enterprise and supported by a partnership including bus manufacturer Build Your Dreams/Alexander Dennis Limited (BYDADL), TfL, bus operator Go Ahead Group, electricity distribution network UK Power Networks, Leeds University and Scotland based Alexander Dennis with aggregation of the buses supported by Origami.
Source and top image: SSE Engerprise