By combining a new generation of piezoelectric nanogenerators with two types of nanowire sensors, researchers have created what are believed to be the first self-powered nanometer-scale sensing devices that draw power from the conversion of mechanical energy. The new devices can measure the pH of liquids or detect the presence of ultraviolet light using electrical current produced from mechanical energy in the environment.
Based on arrays containing as many as 20,000 zinc oxide nanowires in each nanogenerator, the devices can produce up to 1.2 volts of output voltage, and are fabricated with a chemical process designed to facilitate low-cost manufacture on flexible substrates. Tests done with nearly one thousand nanogenerators - which have no mechanical moving parts - showed that they can be operated over time without loss of generating capacity.
"We have demonstrated a robust way to harvest energy and use it for powering nanometer-scale sensors," said Zhong Lin Wang, a Regents professor in the School of Materials Science and Engineering at the Georgia Institute of Technology. "We now have a technology roadmap for scaling these nanogenerators up to make truly practical applications."
For the past five years, Wang's research team has been developing nanoscale generators that use the piezoelectric effect - which produces electrical charges when wires made from zinc oxide are subjected to strain. The strain can be produced by simply flexing the wires, and current from many wires can be constructively combined to power small devices. The research effort has recently focused on increasing the amount of current and voltage generated and on making the devices more robust. Wang's team report on a new configuration for the nanowires that embeds both ends of the tiny structures in a polymer substrate. The wires can then generate current as they are compressed in a flexible nanogenerator enclosure, eliminating the contact with a metallic electrode that was required in earlier devices. Because the generators are completely enclosed, they can be used in a variety of environments.
"We can now grow the wires chemically on substrates that are foldable and flexible and the processing can now be done at substrate temperatures of less than 100 degrees Celsius - about the temperature of coffee," explained Wang. "That will allow lower cost fabrication and growth on just about any substrate."
Wang's team has so far produced two tiny sensors that are based on zinc oxide nanowires and powered by the nanogenerators. By measuring the amplitude of voltage changes across the device when exposed to different liquids, the pH sensor can measure the acidity of liquids. An ultraviolet nanosensor depends on similar voltage changes to detect when it is struck by ultraviolet light. The new generator and nanoscale sensors open new possibilities for very small sensing devices that can operate without batteries, powered by mechanical energy harvested from the environment. Energy sources could include the motion of tides, sonic waves, mechanical vibration, the flapping of a flag in the wind, pressure from shoes of a hiker or the movement of clothing. 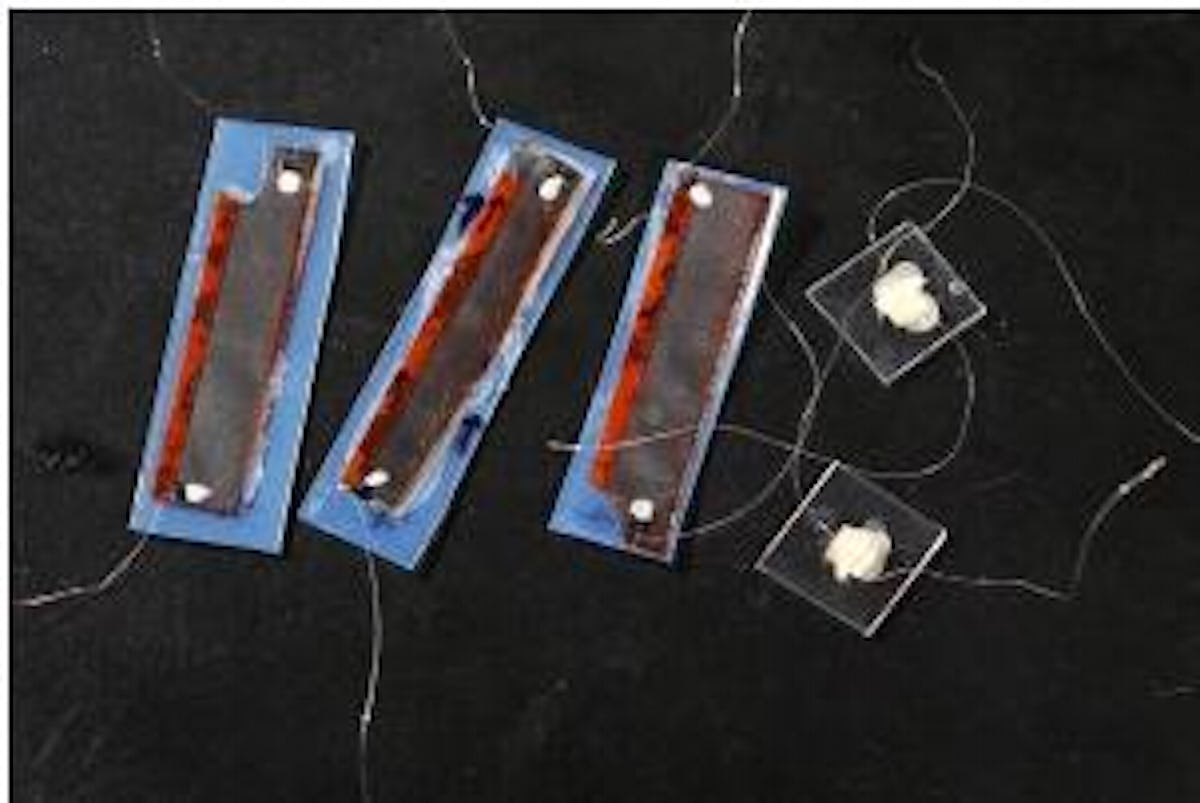 Image shows packaged nanogenerators that use 700 rows of lateral nanowire arrays (left) and packaged nanogenerators that use vertically-aligned nanowire arrays (right). (Click image for high-resolution version. Credit: Gary Meek)
"Building devices that are small isn't sufficient," Wang noted. "We must also be able to power them in a sustainable way that allows them to be mobile. Using our new nanogenerator, we can put these devices into the environment where they can work independently and sustainably without requiring a battery."
Source: Georgia Tech
Top image shows professor Zhong Lin Wang with an improved nanogenerator containing 700 rows of nanowire arrays
For more read : Energy Harvesting and Storage for Electronic Devices 2009-2019
and attend Energy Harvesting & Storage Europe and Wireless Sensor Networks & RTLS Summit 2010