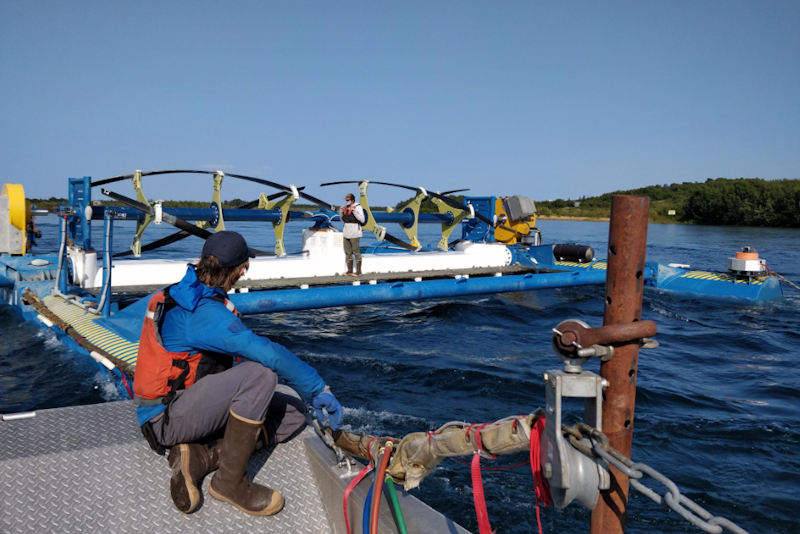 ORPC has concluded summer inspection and maintenance of its RivGen device, re-deployed it and resumed operations sending power to the Igiugig, Alaska, community grid. The project has achieved over 7 million revolutions of the marine hydrokinetic (MHK) turbine to produce power during its 10 months of operation, making the RivGen Power System the longest operating current energy converter in the United States.
During this initial period of operation, the RivGen device survived a mid-winter frazil ice occurrence, was subjected to mobile debris without observed negative effects, and had significant amount of ice flow over it from spring break up of Alaska's largest lake. Monitoring efforts indicated no negative effects to the environment or impedance to or direct interactions with adult sockeye salmon. Lessons learned from this first year of operations are being incorporated into the design of a second RivGen device being assembled for Igiugig. for further information see the IDTechEx report on Wave, Tidal and Hydro Power 1W-10MW 2018-2038.
"ORPC needed to prove the technology, and our village needed to prove that it didn't impact our fish resources, could survive our harsh environment, and be handled with equipment we have on hand," said Igiugig Village Council (IVC) President, AlexAnna Salmon. "Together, what we've achieved to date is remarkable and worth sharing. With the recent purchase of our battery energy storage system, we are looking at the potential to go diesels off in 2021."
IVC Vice President Karl Hill noted, "The valuable experience and training that our local workforce has gained through this project can't be understated. The Igiugig community now has the capabilities to deploy and retrieve the RivGen device with very little help from outside contractors. Our growing autonomy and skill set around operation and maintenance of the system make the project much more cost effective for us."
"The success of Igiugig's hydrokinetic turbine in the Kvichak River demonstrates MHK technology's promise to make significant contributions to the renewable energy mix," commented Renewable Energy Alaska Project Executive Director, Chris Rose.
"With the right support over the next five to ten years, MHK technology can rapidly grow to meet our renewable energy objectives providing power to over 100 million people and, in the process, create hundreds of thousands of new manufacturing, engineering, and marine industry jobs," said ORPC CEO Stuart Davies. "The last ten years were the decade of solar and wind. With the right incentives in place, the next ten years can be the decade of river and tidal energy, bringing with it manufacturing and marine energy jobs to communities across the country and creating a highly- predictable, baseload renewable energy source that will move the U.S. and the world closer to a 100- percent, renewable energy future."
The Igiugig-RivGen multi-year project is supported in part by funding to the Village of Igiugig from the US Department of Energy's Water Power Technology Office and Office of Indian Energy Policy and Programs, as well as private investment.
ORPC is a recognized industry leader in the development of underwater power systems for use in free flowing tidal and river sites and is active in North American, South American and European markets. In addition to operating a commercial river power project for the Village of Igiugig, Alaska, ORPC is also working with the communities of False Pass, Alaska, and Eastport, Maine, on smart microgrid projects utilizing tidal energy as a baseload resource.
Operating in three countries on two continents, ORPC aims to improve people's lives and their environment through sustainable energy solutions, and it is one of the few companies to have built, operated and delivered power to a utility grid from a tidal energy project (in Maine), and to a remote community grid from a river energy project (in Alaska).
Source and top image: ORPC