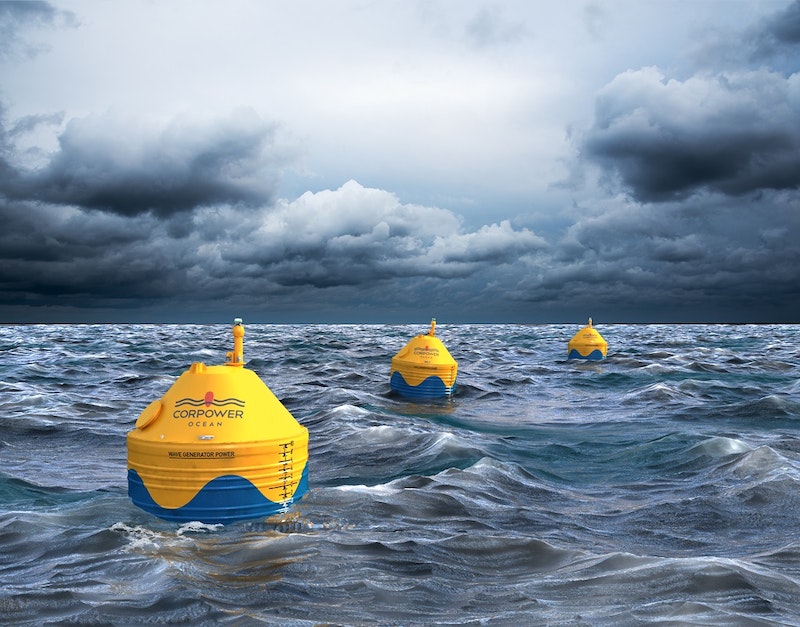 CorPower Ocean is set to unleash a world-leading wave energy project in the Atlantic Ocean after securing a 10-year license.
The TUPEM license - awarded by the national Directorate-General for Natural Resources (DGRM) - provides a 'Permit for the Private Use of the Maritime Space' up to 12 miles off the coast of Aguçadoura in northern Portugal.
CorPower Ocean Country Manager Miguel Silva said the permit unlocks the demonstration phase of the firm's flagship HiWave-5 project, paving the way for a new class of high efficiency WEC products. For further information see the IDTechEx report on Wave, Tidal and Hydro Power 1W-10MW 2018-2038.
"CorPower has reached a series of milestones throughout 2020 and the TUPEM license is another significant step forward," he said. "This permit allows us to kickstart the final phases of our demonstration work in the Atlantic Ocean, which will test our next generation WECs within the most aggressive and challenging maritime conditions. The Aguçadoura coastal zone is a world-renowned site for marine renewable energy and has previously hosted the demonstration of floating offshore wind technology, now fully operational and supplying electricity to Portugal's grid. There is huge potential for wave energy developments to deliver consistent and predictable clean electricity along the Portuguese coast, either as standalone wave farms or combined with floating wind."
For further information visit www.corpowerocean.com

and email info@corpowerocean.com
For press information contact: Sam Pinnington sam@pressing.co Tel: +44 (0)7919 010092.
CorPower's HiWave-5 Project
CorPower's HiWave-5 Project continues in northern Portugal following a decade of product development and three decades of research on wave hydrodynamics. The Swedish-headquartered developer is currently fabricating its first commercial scale C4 WEC - 9x18m, weighing 60 tonnes with a 300kW power rating. Dry testing is scheduled for Spring 2021, before ocean installation in the second half of 2021. This will be followed by a cycle of testing and design updates to further develop the commercial stage C5 machines. A total of three C5 machines will then be installed in Aguçadoura in 2023 to form a grid-connected pilot array and secure type certification. The latest TUPEM announcement comes shortly after CorPower announced a new 16 MEUR (USD 18.1m) R&D, Manufacturing and Service Centre in Viana do Castelo.
About CorPower Ocean
CorPower Ocean brings to market, a new class of high efficiency Wave Energy Converters (WECs) enabling robust and cost-effective harvesting of electricity from ocean waves. The design principle is inspired by the pumping principles of the human heart and offers five times more energy per ton of device compared to previously known technologies, allowing a large amount of energy to be harvested using a small and low-cost device. The CorPower WEC's unique ability to become transparent to incoming waves provides survivability for the WEC in storm conditions. CorPower's is headquartered in Sweden, with offices in Portugal, Norway and Scotland. The company has received broad backing across Europe, with funders including EIT InnoEnergy, the European Commission, the Swedish and Scottish Governments, Midroc New Technology, ALMI Greentech fund and additional private investors.
CorPower's Verification process
CorPower's structured five-stage product verification program is recognized as best practice in the sector. It includes verifying step-by-step that the business case is supported by the physical and economical metrics in each stage from small scale models (since 2012) to full scale array product (by 2024). Dry testing each machine in controlled simulated wave loading on-land to debug and stabilize the machines prior to ocean deployment is a key part of the strategy. It includes a rigorous Certification process with DNV-GL and independent validation of device performance by EMEC and WavEC.
What Makes CorPower technology unique?
The CorPower Wave Energy Converter (WEC) produces 5 times more electricity per ton (>10MWh/t) than any other known wave technology by combining:
The WEC has four significant patented features:
CorPower WECs can harvest the same amount of Annual Energy from a buoy with 1/10 volume compared to conventional point absorber WEC. 1. As comparison, a 300kW CorPower WEC has a size of 9x18m and weighs 60 tonnes, where other wave devices may have dimensions of 100s' of meters and several thousand tonnes for the same capacity. Getting large amounts of electricity from a small device significantly reduces CAPEX. The compact lightweight devices are also less costly to transport, install and service, bringing down OPEX.
Source: Pressing