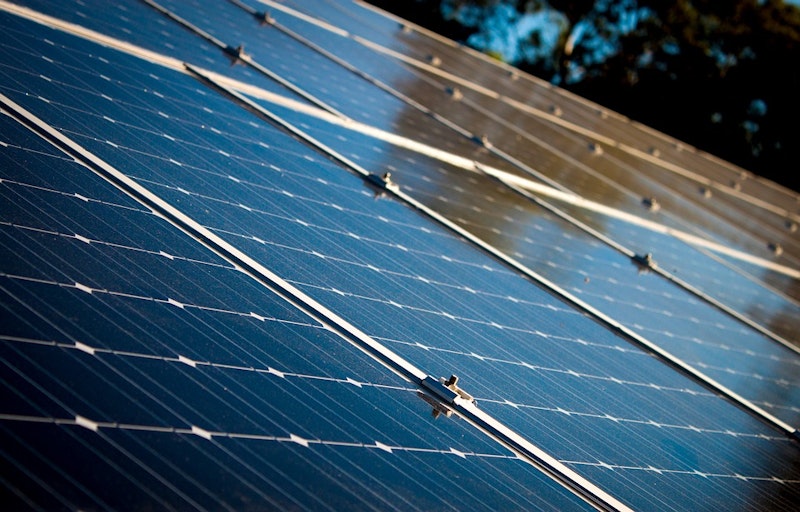 Over 500 solar panels are being installed on the roof of one of the University of Huddersfield's largest buildings as part of a major carbon reduction scheme across the institution, in response to the climate emergency. The work is part of the University's '10 Point Plan' towards achieving Carbon Neutral status for Scope 1 and 2 by 2030. Scope 1 emissions are those from sources directly owned or controlled by the University, while Scope 2 are those generated by use of energy bought from a utility provider.
The photovoltaic (PV) panels will be positioned on top of the Technology Building, the first phase of a planned investment of £1m in measures to reduce carbon emissions on the campus. The Plan was developed in conjunction with staff and students, and adopted by the University's Council in 2020. For further information see the IDTechEx report on Energy Harvesting Microwatt to Gigawatt: Opportunities 2020-2040.
"The panels on the Technology Building will bring major benefits by generating an anticipated 150,000 kWh per year, while addressing another key aim in reducing conventional energy consumption from the National Grid," says Deputy Vice-Chancellor Professor Tim Thornton. "The working group of staff and students that collaborated to produce the 10 Point Plan reflects the strong commitment to achieving carbon neutrality across all areas of the University."
The solar panels will be installed as part of a programme of works in the Technology Building, including an eye-catching new façade facing out onto the University Plaza. New facilities for researchers from the School of Computing and Engineering will be created inside the building, while existing systems such as lighting and heating are being improved to become more energy efficient. The researchers will be using their new facilities to investigate new technologies which may have a global benefit in reducing carbon emissions, including micro-generation, battery storage and electric vehicle charging.
Work on the striking new façade begins soon, while contractors Robertson Construction have already begun a series of projects to prepare for the major work on and around the building.
"The work to transform the Technology Building is fully aligned with our 10 Point Plan," adds Professor Thornton. "Making our pre-existing facilities more energy efficient is vital, and it was a requirement from the very outset of the planning of new buildings such as the Barbara Hepworth Building. Low energy LED lighting is used throughout, and its ventilation system uses highly effective and efficient automated controls. Recent work on the Oastler and Joseph Priestley East buildings also incorporated better energy efficiency, as will any future building or redevelopment projects. With Robertson Construction beginning their work on the Technology Building, this was the perfect opportunity to begin the next phase of our carbon reduction plans. The ongoing move of our data centres from energy-sapping hardware on campus into the cloud is another way in which we will reduce energy consumption on campus. Behind the scenes, we have also installed thousands of low-energy LED lighting units while major improvements to the heating and cooling systems in several buildings are also improving our energy efficiency."
The University of Huddersfield has a growing reputation as an inspiring, innovative provider of higher education of international renown. Researchers at the University of Huddersfield are dedicated to solving the problems and answering the questions posed by industry, science and society as a whole. The University's research is showcased by world-leading applied research groups in biomedical sciences, engineering and physical sciences, social sciences and arts and humanities. The University is recognised as a gold-rated university by the Teaching Excellence Framework (TEF). In 2017, Huddersfield won the first Global Teaching Excellence Award (Higher Education Academy) and is currently joint first in England for professionally qualified teaching staff. In 2019, the University gained a Queen's Anniversary Prize for the innovative work of the Institute of Railway Research. This followed the 2015 Queen's Anniversary Prize for expanding global boundaries in new music. Recognised as a leader in enterprise and innovation, the University has been the recipient of the Times Higher Education magazine's awards for the University of the Year, Entrepreneurial University of the Year and Outstanding Leadership and Management and also a recipient of a Queen's Awards for Enterprise. The University has been awarded an overall 5 Star rating from QS Stars, which renders the university's rating as world-class in Teaching, Employability, Facilities, Innovation, Internationalisation and Inclusiveness.
The University annually enrols over 19,000 students to an increasingly multicultural campus that welcomes students from over 120 countries on to a range of undergraduate and postgraduate programmes across subjects covering...
Source: University of Huddersfield
Top image: Pixabay