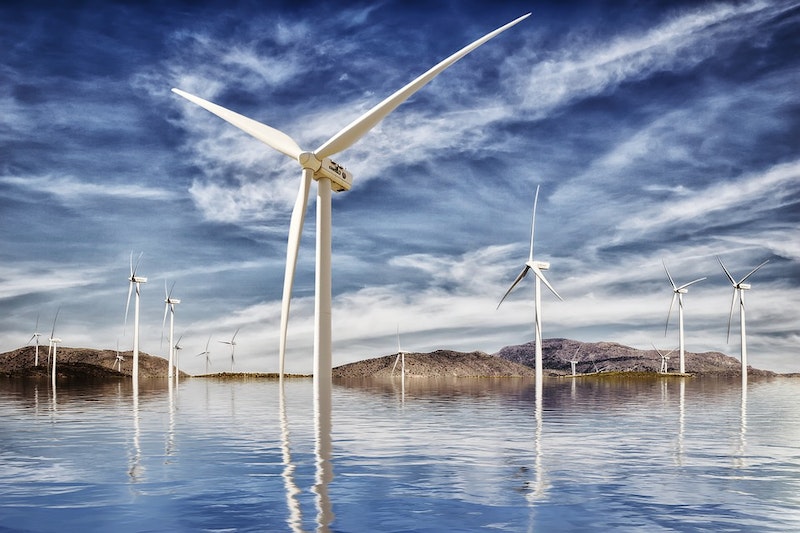 Shearwater Energy Ltd, a United Kingdom-based hybrid clean energy company, is developing a wind-SMR (Small Modular Reactor) and hydrogen production hybrid energy project in North Wales. The project would provide 3 GWe of zero-carbon energy and is also expected to produce over 3 million kilograms of green hydrogen per year for use by the UK's transport sector, ensuring full utilization of the energy produced. Shearwater has also submitted an outline proposal to the British Government and the devolved governments of Wales, Northern Ireland and Scotland, all of whom stand to derive considerable economic benefits in connection with the proposed project.
Shearwater has selected the leading U.S. SMR technology being developed by NuScale Power LLC to provide the clean, base load and load-following energy for the proposed hybrid energy project. Shearwater has signed a memorandum of understanding (MOU) with NuScale Power to further collaboration in advancing the proposed project. For further information see the IDTechEx report on Energy Harvesting Microwatt to Gigawatt: Opportunities 2020-2040.
Under the MOU, Shearwater and NuScale will generally explore opportunities for the combined generation of nuclear power based on NuScale's leading SMR technology, offshore wind energy and hydrogen production at sites in the UK, with a flagship opportunity being explored at Wylfa on Anglesey. As international renewable energy portfolios grow, this collaboration highlights the increasing momentum and need for more flexible and reliable low-carbon energy generation.
NuScale will also specifically support Shearwater as it continues to develop the project, including conducting project-specific engineering, planning, and licensing activities for their SMR technology. NuScale's assessment of the UK supply chain concluded that more than 75% of the content of a NuScale plant could be sourced within the UK. Both parties are committed to further exploring British companies' capabilities to participate in maximizing the UK content of this project.
"Combining low-carbon generating technologies enables us to achieve similar performance characteristics to large thermal plants without the high cost, long construction time and environmental legacy," explained Simon Forster, Chief Executive Officer of Shearwater. "When fully developed, an SMR-wind plant at Wylfa will provide 3 GW of reliable, zero-carbon electricity at a fraction of the cost of a conventional nuclear power station with surplus energy generation focused on the production of hydrogen to support the transport sector's transition to low-carbon fuels. Power generation at Wylfa could begin as early as 2027."
"With deep knowledge and expertise in the clean energy sector of the United Kingdom, Shearwater Energy understands the unique challenges facing the energy needs of the region," said John Hopkins, Chairman and Chief Executive Officer of NuScale Power. "NuScale looks forward to demonstrating the innovative features of our SMR design, and how our load following capability is a perfect complement to Shearwater's offshore wind project as the country seeks to meet its clean energy goals."
Given the UK's recently announced plans to rapidly expand offshore wind capacity by 2030 and invest in SMR development to meet net-zero carbon emissions goals by 2050, a Shearwater-NuScale wind-nuclear energy system will provide reliable, load following power to overcome intermittency and grid stability issues. Additionally, green hydrogen produced by a Shearwater-NuScale wind-nuclear energy system will support industry, transport, power and homes providing a further opportunity for decarbonization and affordable energy security.
NuScale made history in August 2020 as the first SMR to ever receive design approval from the U.S. Nuclear Regulatory Commission. NuScale's innovative, modular design has unparalleled safety and reliability features and is flexible, economic, faster to build, and readily integrated into existing power supply systems. In the US, NuScale's power company customer will be breaking ground in 2023 on its first project located in the state of Idaho.
Press Contact:
Shearwater Energy
+44 (0) 78 4605 9145
tom.parks@shearwaterenergy.co.uk
http://shearwaterenergy.com/
Source: Shearwater Energy
Top image: Pixabay

Shearwater appears to be a 2019 start-up with only 4 employees, and does not yet seem to have submitted any accounts to companies house. It is not clear whether it has ever completed an projects, at even a modest scale. It is not clear how Shearwater would have the capacity or relevant experience to develop plans for an £8bn project, let alone to construct an £8bn project. Perhaps Shearwater will be able to convince us.