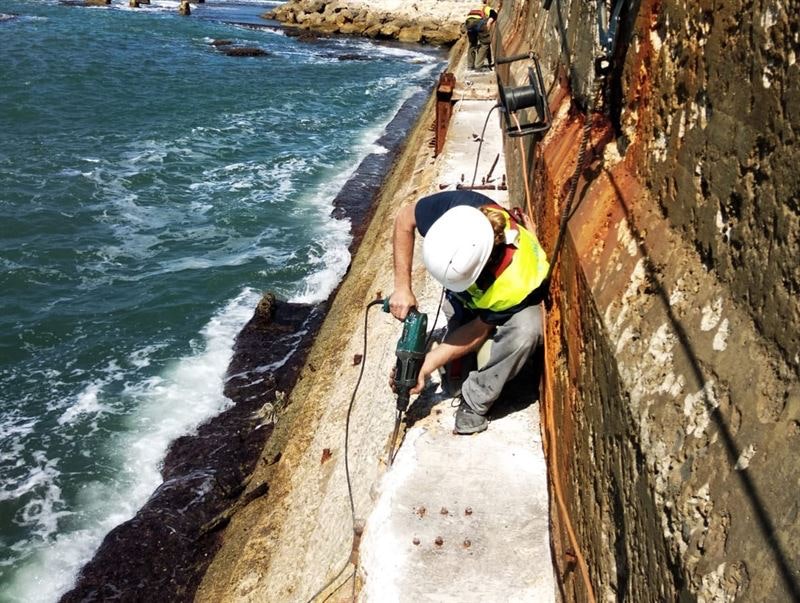 Pursuant to the engineering coordination permit from the Municipality of Tel-Aviv Jaffa Eco Wave Power is pleased to announce that it officially commenced preparation works for installation of floaters on the sea wall of the Port of Jaffa, Israel.
The works will include clearing the top cement layer of the relevant sections of the sea wall, followed by adding steel rebars for reinforcement and finally the creation of a new cement layer, which shall provide the necessary support for the installation of the floaters. In parallel, the company have commenced the production of ten floaters, which are expected to arrive to site in conjunction with the finalization of the works on the sea wall.All works are performed by a local subcontractor, during days of calm sea, to enable safe work on the sea wall. For further information see the IDTechEx report on Wave, Tidal and Hydro Power 1W-10MW 2018-2038.
"We have previously finalized the assembly of our conversion unit and now moving forward to the most exciting part of our project, which is the installation works. We cannot wait to finalize the floaters production and installation of the whole array, which will enable us to send clean electricity from sea waves to the Israeli national electrical grid for the very first time," said Inna Braverman, Founder and CEO of Eco Wave Power.
The EWP-EDF One wave energy project will include 10 floaters, connected to one conversion unit. Due to the onshore nature of the Eco Wave Power technology, the works on the sea wall and floaters installation will be straightforward and will not involve any works performed from the seaside. The EWP-EDF One conversion unit will be located on land, just like a regular power station, enabling an easy access for operation and maintenance. This highlights the significant advantages of the EWP onshore technology, in comparison with offshore solutions.
The EWP-EDF one project is executed in collaboration with EDF Renewables IL and co-funding from the Israeli Energy Ministry.
About EWPG Holding AB
EWPG Holding AB is a leading onshore wave energy technology company that developed a patented, smart and cost-efficient technology for turning ocean and sea waves into green electricity. Eco Wave Power's mission is to assist in the fight against climate change by enabling commercial power production from ocean and sea waves. EWP is recognized as a "Pioneering Technology" by the Israeli Ministry of Energy, and was labelled as an "Efficient Solution" by the Solar Impulse Foundation. Eco Wave Power's project in Gibraltar has received funding from the European Union Regional Development Fund and from the European Commission's Horizon 2020 framework program. The company has also received the "Climate Action Award" from the United Nations. Eco Wave Power's common shares (ECOWVE) are traded on Nasdaq First North Growth Market.
FNCA is the company's Certified Advisor info@fnca.se).
Read more about Eco Wave Power at: www.ecowavepower.com

Human-Machine Interfaces Work Underwater, Generate Their Own Power
Philippines to Develop up to 3GW Wind Power
A Simple, Cheap Material for Carbon Capture, Perhaps from Tailpipes
Recylable Wind Turbine Blades Get to Work