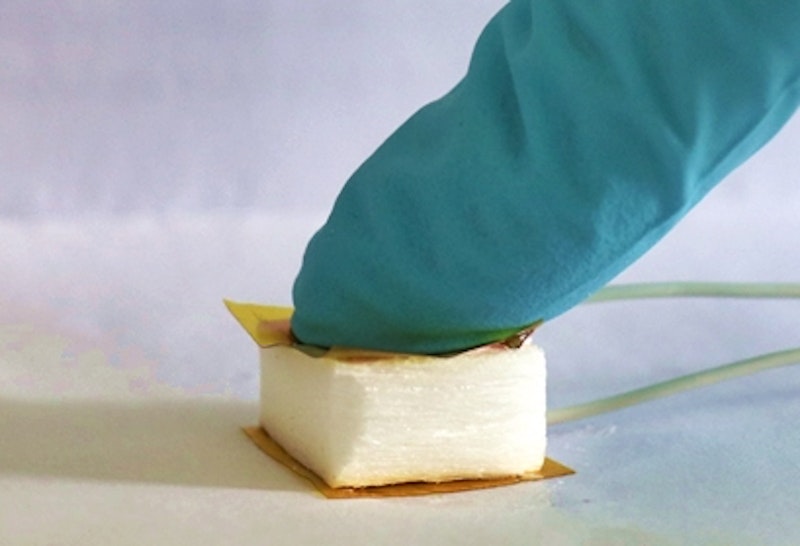 Researchers at Empa and ETH Zurich have made wood compressible and turned it into a micro-generator. When it is loaded, an electrical voltage is generated. In this way, the wood can serve as a bio-sensor - or generate usable energy. The latest highlight: To ensure that the process does not require aggressive chemicals, naturally occurring wood-degrading fungi take over the task of modifying the wood.
Ingo Burgert and his team at Empa and ETH Zurich has proven it time and again: Wood is so much more than "just" a building material. Their research aims at extending the existing characteristics of wood in such a way that it is suitable for completely new ranges of application. For instance, they have already developed high-strength, water-repellent and magnetizable wood. Now, together with the Empa research group of Francis Schwarze and Javier Ribera, the team has developed a simple, environmentally friendly process for generating electricity from a type of wood sponge, as they reported last week in the journal Science Advances. For further information see the IDTechEx report on Piezoelectric Harvesting and Sensing 2019-2039.
If you want to generate electricity from wood, the so-called piezoelectric effect comes into play. Piezoelectricity means that an electric voltage is created by the elastic deformation of solids. This phenomenon is mainly exploited by metrology, which uses sensors that generate a charge signal, say, when a mechanical load is applied. However, such sensors often use materials that are unsuitable for use in biomedical applications, such as lead zirconate titanate (PZT), which cannot be used on human skin due to the lead it contains. It also makes the ecological disposal of PZT and Co rather tricky. Being able to use the natural piezoelectric effect of wood thus offers a number of advantages. If thought further, the effect could also be used for sustainable energy production. But first of all, wood must be given the appropriate properties. Without special treatment, wood is not flexible enough; when subjected to mechanical stress; therefore, only a very low electrical voltage is generated in the deformation process.
Jianguo Sun, a PhD student in Burgert's team, used a chemical process that is the basis for various "refinements" of wood the team has undertaken in recent years: delignification. Wood cell walls consist of three basic materials: lignin, hemicelluloses and cellulose. "Lignin is what a tree needs primarily in order to grow to great heights. This would not be possible without lignin as a stabilizing substance that connects the cells and prevents the rigid cellulose fibrils from buckling," explains Burgert. In order to transform wood into a material that can easily be deformed, lignin must at least partially be "extracted". This is achieved by placing wood in a mixture of hydrogen peroxide and acetic acid. The lignin is dissolved in this acid bath, leaving a framework of cellulose layers. "We take advantage of the hierarchical structure of wood without first dissolving it, as is the case in paper production, for example, and then having to reconnect the fibers," says Burgert. The resulting white wood sponge consists of superimposed thin layers of cellulose that can easily be squeezed together and then expand back into their original form - wood has become elastic.
Burgert's team subjected the test cube with a side length of about 1.5cm to about 600 load cycles. The material showed an amazing stability. At each compression, the researchers measured a voltage of around 0.63V - enough for an application as a sensor. In further experiments, the team tried to scale up their wooden nanogenerators. For example, they were able to show that 30 such wooden blocks, when loaded in parallel with the body weight of an adult, can light up a simple LCD display. It would therefore be conceivable to develop a wooden floor that is capable of converting the energy of people walking on it into electricity. The researchers also tested the suitability as a pressure sensor on human skin and showed that it could be used in biomedical applications.
The work described in the Empa-ETH team's latest publication, however, goes one step further: The aim was to modify the process in such a way that it no longer requires the use of aggressive chemicals. The researchers found a suitable candidate that could carry out the delignification in the form of a biological process in nature: the fungus Ganoderma applanatum, the causes of white rot in wood. "The fungus breaks down lignin and hemicellulose in the wood particularly gently," says Empa researcher Javier Ribera, explaining the environmentally friendly process. What's more, the process can be easily controlled in the lab.
There are still a few steps to be taken before the "piezo" wood can be used as a sensor or as an electricity-generating wooden floor. But the advantages of such a simple and at the same time renewable and biodegradable piezoelectric system are obvious - and are now being investigated by Burgert and his colleagues in a follow-up projects. And in order to adapt the technology for industrial applications, the researchers are already in talks with potential cooperation partners.
Source and top image: Empa