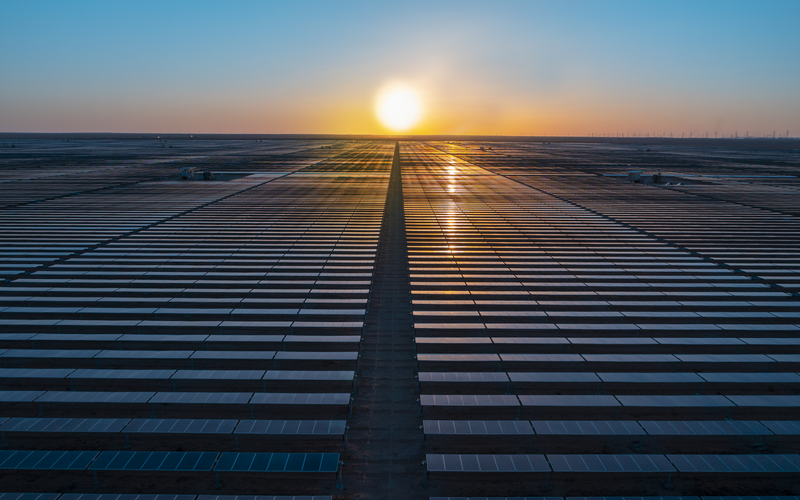 ACWA Power, a leading Saudi developer, investor and operator of power generation and water desalination plants, announces the official inauguration of the 300 MW Sakaka PV IPP, the kingdom of Saudi Arabia's first utility scale renewable energy project, at an investment value of 1.2 billion Saudi riyals. The ceremony was held under the patronage of His Royal Highness Prince Mohammed bin Salman bin Abdulaziz Al Saud, Crown Prince, Deputy Prime Minister and Minister of Defense, and in the presence of His Royal Highness Prince Abdulaziz Bin Salman Bin Abdulaziz Al Saud, Saudi Minister of Energy, and Prince Faisal bin Nawaf bin Abdulaziz, Governor of Al-Jouf Region, and senior government officials and representatives from the KSA Ministry of Energy, Al Jouf region, and ACWA Power.
"The private sector plays a fundamental role in the development of renewable energy projects in the Kingdom. The Sakaka project we are inaugurating today was developed by ACWA Power, together with various Saudi companies that have worked alongside ACWA Power to make this remarkable achievement a reality. ACWA Power is the leading national company in this field, and it is considered a state-owned company and is sponsored by the state, because ACWA Power has proven to be a distinct company worthy of the government's ownership. Consequently, the Public Investment Fund currently has 50% ownership of ACWA Power, which as my brother Mohammad mentioned, spans thirteen countries around the world. One of its most important projects is Sakaka PV, which as my brother Mohamed also stated, that 97% of the operating team are Saudis, and 90% of the workforce is from Al Jouf region." His Royal Highness Prince Abdulaziz Bin Salman Bin Abdulaziz Al Saud, Saudi Minister of Energy.
The inauguration of Sakaka PV IPP marks a pivotal moment in the continued energy diversification and development plans of Saudi Arabia. The project was awarded to an ACWA Power led consortium at a world record tariff, at the time, of 8.781 halalas/kWh in 2018, which has paved the way for subsequent projects of the National Renewable Energy Program (NREP) to lower the cost of clean solar electricity in the Kingdom. For further information see the IDTechEx report on Distributed Generation: Off-Grid Zero-Emission kW-MW 2020-2040.
"I am delighted to partake in the phenomenal achievement of inaugurating the first renewable energy plant in the Kingdom, which affirms ACWA Power's role as a leading Saudi national company that has been at the forefront of the energy transition - not only in the Kingdom, but also in a growing number of international key markets. We are proud to extend our market leadership, contributing to the mission to achieve the goals of Vision 2030 and the requirements of the National Renewable Energy Program launched in the Kingdom by the Custodian of the Two Holy Mosques King Salman bin Abdulaziz Al Saud; guided by the directives of the Crown Prince His Royal Highness Prince Mohammed bin Salman bin Abdulaziz Al Saud; and underpinned by the unparalleled support of His Royal Highness Prince Abdulaziz Bin Salman Bin Abdulaziz Al Saud, Saudi Minister of Energy," said Mohammad Abunayyan, ACWA Power Chairman.
Abunayyan stated that the success of completing the Sakaka project in record time embodies a pivotal foundation for diversifying the energy mix and accelerating energy efficiency in the Kingdom, as well as transferring ACWA Power's international expertise, knowledge and capabilities in the global renewable sector back to the Kingdom. The Sakaka project will encourage local Saudi companies to participate in the implementation of renewable energy projects and support Saudi talent in cultivating the skills and competencies needed in this thriving sector, which constitutes one of the Kingdom's key pillars for sustainable socioeconomic development.
Al Gihaz Holding, a major Saudi contractor and investor, owns a 30% stake in the Sakaka Solar Energy Company (SSEC), alongside ACWA Power's 70% stake, and was instrumental in both the investment, engineering, procurement and construction of the project.
ACWA Power remains focused on extending its leadership and accelerating the energy transition in Saudi Arabia and beyond through operational excellence and technological expertise, delivering power and desalinated water to communities in thirteen countries worldwide.
Source: ACWA Power