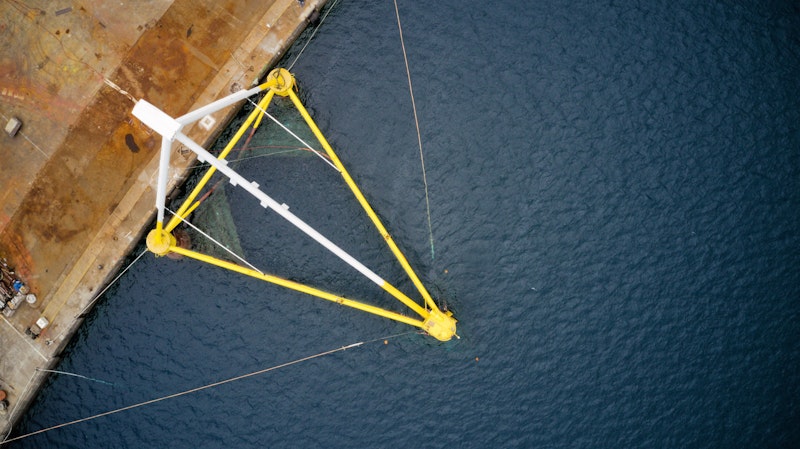 X1 Wind is preparing to deploy its ground-breaking PivotBuoy floating wind technology in the Canary Islands after successfully completing the assembly and load-out of a fully-functional prototype.
The prototype has been developed through the €4million PivotBuoy Project awarded by the European Commission H2020 Program. It will be installed at the PLOCAN test site with full exposure to open ocean conditions in a bid to demonstrate the efficiency of the innovative structural design and mooring system.
The pan-European Pivotbuoy consortium includes leading companies EDP NEW, DNV, INTECSEA, ESM and DEGIMA and world-class research centres WavEC, PLOCAN and DTU. The Pivotbuoy Project is aiming to substantially reduce the current Levelized Cost Of Electricity (LCOE) of floating wind by demonstrating the advantages of the PivotBuoy system, namely a reduced floater weight, a faster and cheaper installation process and a more reliable operation. For further information see the IDTechEx report on Energy Harvesting Microwatt to Gigawatt: Opportunities 2020-2040.
Fitted with a Vestas V29 turbine, the 1:3 scale prototype (X30) will be stationed at a 50m water depth through a single point mooring system in a downwind configuration - creating a 'weathervaning' solution which maximises use of passive systems.
X1 Wind CTO and Co-Founder Carlos Casanovas said the team is thrilled to reach PivotBuoy's deployment phase following several years of intense work. "We are immensely grateful to our project partners who have all played an instrumental role, with careful planning and preparation to ensure the X30 prototype's successful assembly and load-out," he said. "Portside testing of all subsystems will be performed over the coming weeks, before PivotBuoy is installed in the PLOCAN test site and connected via a dynamic 20kV cable, later progressing to the commissioning phase - the timing of which will be determined by environmental condition. Construction of the X30 Platform was completed last November by DEGIMA in Santander, before being shipped in different segments to Gran Canaria. Structural assembly was managed entirely onshore at Hidramar Shipyard, Las Palmas, using regular LTM mobile cranes and local equipment. Throughout the process we were able to mobilise and engage local supply chains, which is a key feature of our future fabrication and deployment plan for full-scale units. Local manufacturing, assembly and load out supports the development of local economies and job creation in the offshore wind sector, while also avoiding long transit times and saving costs and carbon emissions for future projects. Importantly, our floating wind technology offers a lighter design requiring less steel - which also reduces carbon emissions during fabrication - and requires a significantly smaller footprint on the ocean floor when compared to catenary systems. The scalability of our technology further enables us to transition easily up to 15MW mega-turbines operating at depths of 500m plus."
X1 Wind was set up in 2017. Its technology has advanced rapidly from concept design to demonstration in less than four years. This has been achieved through strong backing from private investment and public sector funding, with further recognition from leading institutions including EIT Innoenergy, EIC Accelerator, CDTI, ENISA and ACCIO, in addition to the H2020 funding for this specific project.
"This is a significant step forward for X1 Wind, preparing the way to demonstrate how our innovative technology can deliver dramatic cost savings and firmly position floating wind as a competitive green energy resource," said X1 Wind CEO & Co-Founder Alex Raventos. "We have a clear trajectory with funding secured to design and certify our technology at full-scale. This will allow us to move swiftly in the short term through the pre-commercial phase. X1 Wind is a progressive company, driven by talented individuals with a passion for the environment and a mission to re-direct the future energy transition. Our technology can play a crucial role to reduce harmful climate change and reenergise global efforts to limit temperature rises to 1.5C, in line with the UN's Paris Climate Agreement and EU's 2050 Climate Neutrality target."
INTECSEA Engineering Manager J.W. Timmermans said: "INTECSEA is very pleased to have been able to contribute to the realization of this PivotBuoy prototype, which offers exciting opportunities for cost-effective development of offshore wind resources. We appreciate the professionalism with which X1Wind has led the project to this major milestone and we look forward to a successful offshore trial period."
DNV Business Development Director Claudio Bittencourt said: "As partner in the H2020 project, DNV has contributed to the development and improvement of this project so that it is positioned for the technical challenges that come with its future commercialisation. The project provides an excellent opportunity to implement and rigorously test the technology and accelerate the much needed energy transition where floating wind is expected to play a major role."
The PivotBuoy concept was initially developed by Mr Casanovas in 2012 while studying at Massachusetts Institute of Technology (MIT), before progressing the patented technology for almost a decade. X1 Wind's team benefits from more than 20 years' experience within leading renewable energy, engineering and strategy institutions including Alstom, Siemens Gamesa, ABB, Rolls Royce, General Electric, Ecotenia, Boston Consulting Group, the Singularity University, MIT, Imperial College London, INSEAD and UPC.
For further information about X1 Wind visit www.x1wind.com

Media Contacts
Hedy Mahmoudi (X1 Wind)
hedy.mahmoudi@x1wind.com
About PivotBuoy
The PivotBuoy Project aims to validate the benefits of the PivotBuoy® mooring system, An Advanced System for Cost-effective and Reliable Mooring, Connection, Installation & Operation of Floating Wind. While the scope of the project is on demonstrating the innovative PivotBuoy® single point mooring system, it will also enable the test of the Vestas V29 turbine adapted in a downwind configuration in real floating conditions at PLOCAN test site in the Canary Islands. The Consortium is formed by nine partners from five different countries including X1 Wind, EDP NEW, DNV, INTECSEA, ESM, DEGIMA, WavEC, PLOCAN and DTU. The project officially started in April 2019 and will last for 36 months.
Source: Pressing PR