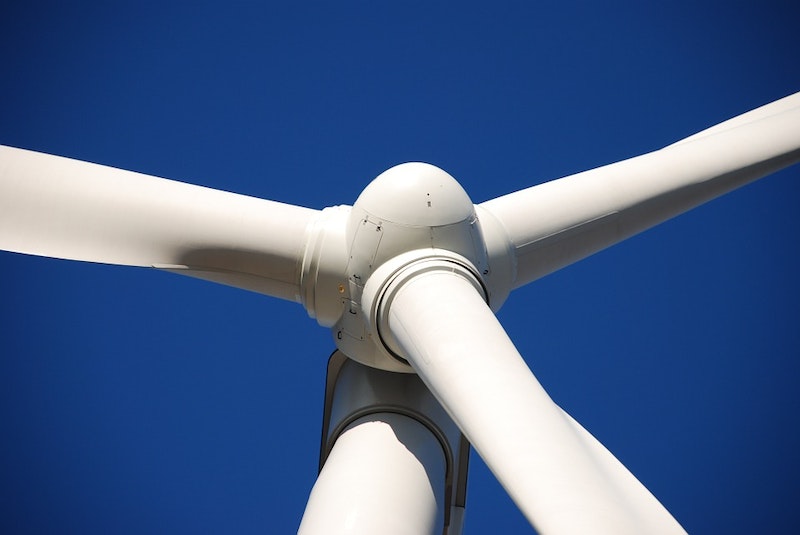 The United States Secretary of the Interior has announced approval of the construction and operation of the Vineyard Wind project — the first large-scale, offshore wind project in the United States. Vineyard Wind 1 is an 800 MW project located 15 miles off the coast of Martha's Vineyard and will be the first commercial scale offshore wind project in the United States. The project will generate electricity for more than 400,000 homes and businesses in the Commonwealth of Massachusetts, create 3,600 Full Time Equivalent (FTE) job years over the life of the project, save ratepayers $1.4 billion over the first 20 years of operation and is expected to reduce carbon emissions by more than 1.6 million tons per year.
The 800-megawatt Vineyard Wind energy project will contribute to the goal of generating 30 gigawatts of energy from offshore wind by 2030. The project will be located approximately 12 nautical miles offshore Martha's Vineyard and 12 nautical miles offshore Nantucket in the northern portion of Vineyard Wind's lease area. It will create 3,600 jobs and provide enough power for 400,000 homes and businesses. Vineyard Wind is a joint venture between Avangrid Renewables, a subsidiary of AVANGRID Inc, and Copenhagen Infrastructure Partners. For further information see the IDTechEx report on Energy Harvesting Microwatt to Gigawatt: Opportunities 2020-2040.
"Today's Record of Decision is not about the start of a single project, but the launch of a new industry," said Vineyard Wind CEO Lars T. Pedersen. "Receiving this final major federal approval means the jobs, economic benefits and clean energy revolution associated with the Vineyard Wind 1 project can finally come to fruition. It's been a long road to get to this point, but ultimately, we are reaching the end of this process with the strongest possible project. I want to thank the Biden Administration, Secretaries Haaland and Raimondo and BOEM for their efforts in finalizing the review of this project. I also want to thank Governor Baker, the Massachusetts federal delegation and State Legislature for their steadfast commitment to seeing this endeavor through to today. And of course, I want to extend my sincerest appreciation to all our supporters and stakeholders for all of their work, input and dedication. We could not have reached this milestone without you."
"We are very excited and proud to be part of the birth of an incredibly important new industry the U.S. Offshore wind is a key part of America's clean energy future, and Vineyard Wind 1 is a major step forward to the clean and connected future we envision and work toward every day," said AVANGRID CEO Dennis V. Arriola. "We appreciate the thorough review by BOEM as well as the considerable input from stakeholders. The broad engagement from many parties throughout this process has improved the project and positioned both Vineyard Wind 1 and the broader offshore wind industry for long-term success."
"We are very proud to have been part of developing this landmark project," said Christian T. Skakkebæk, a Senior Partner and Co-founder of CIP. "Vineyard Wind 1 is slated to become one of the world's largest offshore wind projects, creating significant investments and good paying jobs in the U.S. For many years we have been actively engaged in the development of the U.S. offshore wind market, and we are confident that Vineyard Wind will pave the way for a successful and growing wind industry in the country. This market will play an important role for CIP's renewable investments for years to come, and we look forward to being an integral part in the transition to green energy in the U.S."
"Massachusetts should be proud that this decision launches the nation's first commercial-scale offshore wind project here on the Commonwealth's shores," said Governor Charlie Baker. "This groundbreaking project will produce affordable, renewable energy, create jobs and prove Massachusetts developed a successful model for developing offshore wind energy. We appreciate the federal government's partnership to grant this approval and look forward to working with Vineyard Wind to create thousands of jobs and set the Commonwealth on a path to achieve Net Zero emissions."
"Today's approval of the Vineyard Wind offshore project is a key step toward achieving the Biden Administration's goal of bringing 30 GW of offshore wind online by 2030, and GE is excited to support that goal by providing our Haliade-X turbines, the most powerful offshore wind turbine built to date, for this project," said John Lavelle, President & CEO, Offshore Wind at GE Renewable Energy. "Today's decision is one more reason to be optimistic about the potential of offshore wind in the US, an abundant source of clean, renewable energy that can help coastal communities address the threat of climate change and accelerate the energy transition."
Since 2017, the Vineyard Wind 1 project has been through an unprecedented and exhaustive public review process that generated more than 30,000 public comments, more than 90% of which supported the project. The Construction and Operations Plan (COP) was reviewed by more than two dozen federal, state, and local agencies over the course of more than three and a half years.
The project design includes the world's most powerful wind turbine, the GE Haliade-X, with a capacity of 13 megawatts (MW). The larger turbine capacity has allowed the project to reduce the total number of turbines from 108 to 62 while still delivering a total capacity of 800 MW to Massachusetts ratepayers. The turbine layout, which features consistent spacing of one nautical mile between turbines, was endorsed by the United States Coast Guard for transit, fishing and navigational safety.
In response to comments and direct engagement with neighboring communities, environmental organizations and advocates, fisheries organizations, and governmental and tribal entities, the project has incorporated significant mitigation measures, including:
Historic Protections for the North Atlantic Right Whale (NARW):
Substantial Fisheries Investment and Mitigation Funding:
Cultural and Historical Protections:
Vineyard Wind will reach financial close in the second half of 2021 and begin delivering clean energy to Massachusetts in 2023. 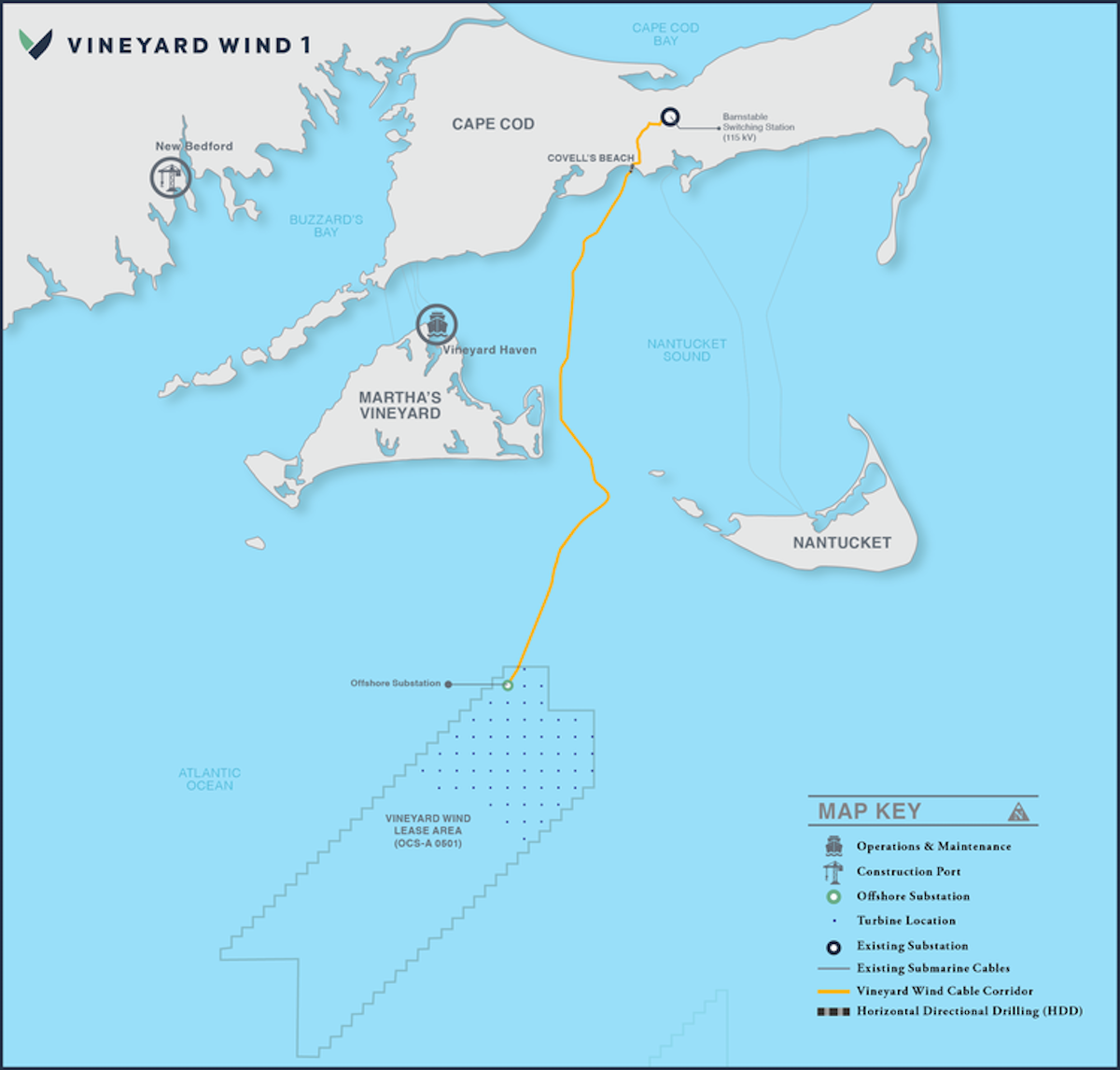