There have been concerns about the limitations of the various energy harvesting technologies which might explain the modest success of energy harvesting in electronics beyond the widespread use of photovoltaics. Many electrical devices are powered by electrodynamics - from the flashlight with the hand crank to the bicycle dynamo - but not many electronic devices apart from a few wristwatches and some laptops in Africa. It is popularly taught that electrodynamics does not downsize efficiently and it will never appear in MEMS for example. With piezoelectrics, seems to be an ongoing problem with reliability and life, particularly in vibration harvesters: broadband plug and play versions desired in the marketplace have been elusive.
Thermoelectrics was popularly seen as so inefficient that it would never be a success at temperature differences of only a few degrees centigrade. Combinations of energy harvesting in relatively large portable devices is increasingly popular and it is seen to be a solution to the demanding power requirements of Wireless Sensor Networks (WSN) but that has tended to consist of a lump of one harvester, a lump of another and a lump of electronics, dedicated to purpose and not suitable for other inputs. Add to all that the common need for twenty years maintenance free life for WSN etc when rechargeable batteries and some forms of harvesting rarely last more than ten years and their guarantees are even less.
It is therefore very exciting that all this legacy thinking is gradually being eroded.

Thermoelectric harvesting is now frequently announced as practicable with only a few degrees temperature difference, not because it has become more efficient but because the newer chips work from a whisper of electricity. For example, at a recent IDTechEx conference, Schneider Electric announced wireless temperature sensing using ZigBee and a thermoelectric generator. Energy harvesting and voltage conversion involved a thin film thermo generator where only 3°C temperature difference generated 126µW (@ 210mV) and a standard DC-DC converter had efficiency ~70%: 100µW at 2.4V. In a star architecture, measurement and data transmission could be achieved every five seconds using ZigBee. 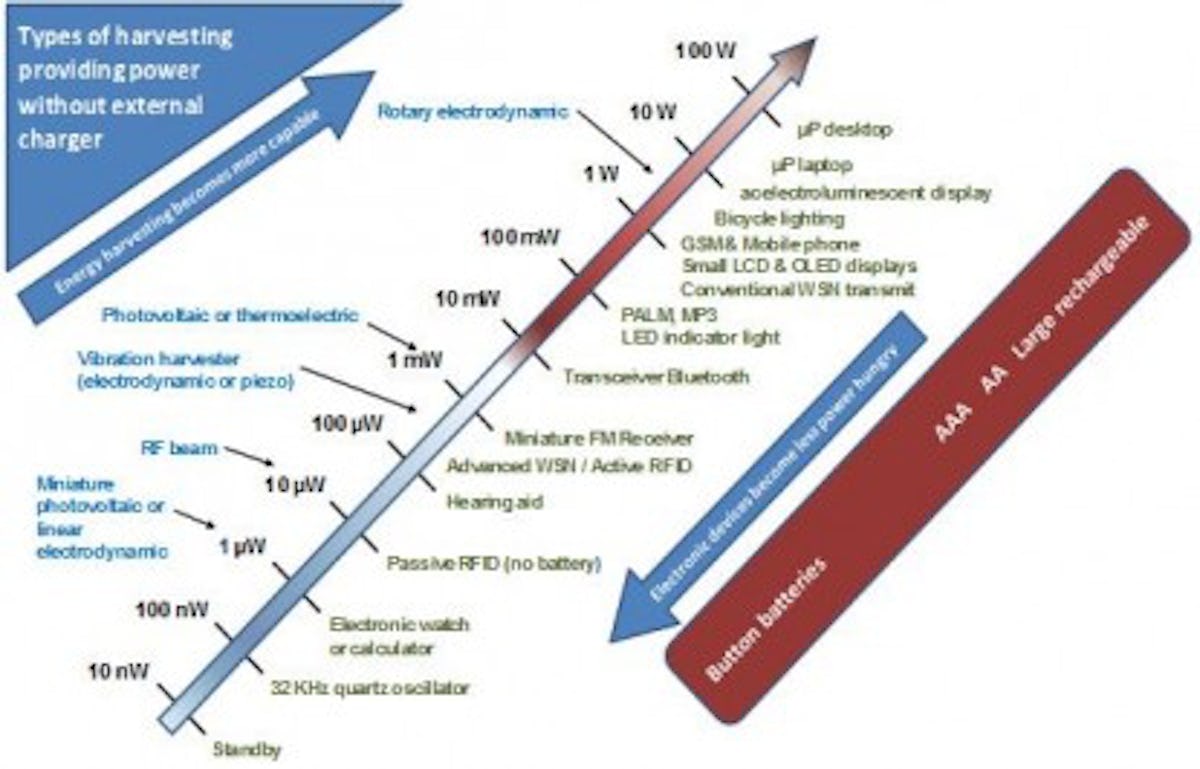 Source IDTechEx
Researchers at the Georgia Institute of Technology have discovered a method that could lead to medical devices that are powered by a patient's heartbeat. Zhong Lin Wang and his team at GeorgiaTech have deposited zinc oxide nanowires on a flexible polymer substrate, after which the device was put into a polymer casing to protect it from body fluids interacting with it. Then the device, measuring 2 millimeters by 5 millimeters, was attached to the diaphragm of a laboratory rat. The stretching of the rat's diaphragm during breathing stretched the nanowires, and the device generated around four picoamperes of current at two millivolts. The device was then attached to a rat's heart where it generated 30 picoamperes at three millivolts. Although the current produced is small, if the new ultra low power chips are used, the technology has the potential to power nano-sized devices such as early warning systems of hypoglycaemia, blood pressure monitors and glucose sensors using power from the human heart. Their goal is to improve the power output in order to power these medical devices. In parallel, The University of Southampton in the UK has demonstrated the feasibility of powering implanted defibrillators and pacemakers using a simple electrodynamic harvester implanted onto the human heart.

Many now believe that exploiting non linear effects in piezoelectrics and moving the ceramic very little, respectively leads to broad band performance and long life. Some test results give the impression that commercial products will be possible within a very few years, possibly increasing the vibration harvesting market one hundredfold.

Various theoretical possibilities have been known for some time, such as energy harvesting using fibers in apparel or piezoelectric effects in plastic film but these are all looking much more practicable recently. This is partly because the new electronics can cope with much lower power. For example, Electroactive Polymers (EAPs) may be a promising alternative for some energy harvesting applications, due to the flexibility, versatility and low cost of these materials. European Union project Dephotex is carrying out research on photovoltaic textiles based on novel fibers. The three year project runs to October 2011. On the other hand, so called Synchronized Switch Harvesting on Inductor (SSHI) is looking promising. It is being applied to both piezoelectric and pyroelectric harvesting by Dr. Nantakan Muensit, associate professor at the Material Physics Laboratory, Prince of Songkla University, Thailand.
With the accelerating pace of change, IDTechEx forecasts that many of these advances will boost the market for energy harvesting and for WSN and other devices using energy harvesting. The energy harvesting market will surpass one billion dollars in 2013 just for the harvesting elements without counting the electronics, batteries and so on. For full forecasts by applicational sector see the IDTechEx report Energy Harvesting 2010-2020.
IDTechEx will be hosting Energy Harvesting & Storage USA and Wireless Sensor Networks & RTLS 2010 this November 16-17 in Boston, MA. This event focuses on the uses, potential users and market forecasts as well as giving the latest technology developments and trends, is the meeting place for users, investors, suppliers, developers, system integrators and government representatives. It is the world's largest event on the topic, with 400 attendees and 30 exhibitors anticipated. For full details, visit www.IDTechEx.com/Boston.
Top image source: Dark Sky Society
For more read : Energy Harvesting and Storage for Electronic Devices 2010-2020
and attend Energy Harvesting & Storage and Wireless Networks & RTLS USA 2010